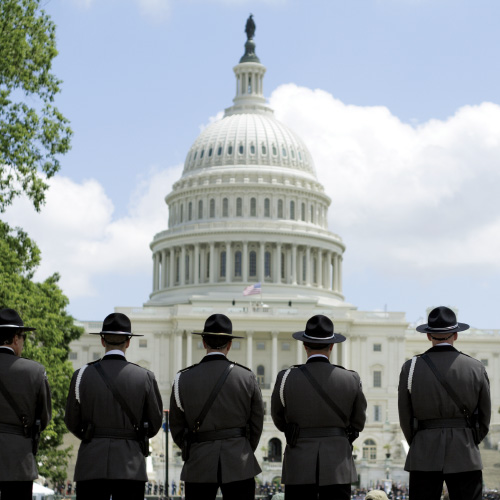 Today marks the beginning of National Police Weekend in Washington, D.C. After two postponed National Police Week gatherings in May 2020 and 2021 due to pandemic restrictions, law enforcement personnel, supporters and survivors from across the country have finally made the pilgrimage to our nation’s capital to honor the fallen and bring closure to their families. From today through October 17, numerous events will be held in commemoration of the officers who made the ultimate sacrifice in 2019 and 2020. Here, we highlight a few key observances that will be taking place this weekend.

At the Candlelight Vigil on October 14, hosted by the National Law Enforcement Officers Memorial Fund (NLEOMF), all 701 officers’ names will be read by high-ranking government officials and leaders from local, state and federal law enforcement agencies. The vigil will take place on the National Mall at 6 p.m. and will be livestreamed for those unable to attend in person. (To watch the 2021 virtual Candlelight Vigil that was held in May, please click here.)

On October 15, the Concerns of Police Survivors (C.O.P.S.) — an organization that provides resources to survivors and co-workers affected by line-of-duty deaths — will be holding its National Police Survivors Conference. This poignant gathering gives surviving family members, friends and co-workers the opportunity to find support and understanding from other survivors, talk with mental health professionals and attend seminar sessions that will help them and their family address their grief. It also allows survivors to see firsthand the support available to them through C.O.P.S.

On October 16, the National Fraternal Order of Police and the National Fraternal Order of Police Auxiliary will host the annual National Peace Officers’ Memorial Service on the west front lawn of the U.S. Capitol. The service will feature moving tributes from various speakers and performers, and family members of the fallen will be able to place a flower in the memorial wreath as their loved ones’ names are read. Following the service, a wreath-laying ceremony is scheduled to take place at the National Law Enforcement Officers Memorial.

“These ceremonies allow us to never forget the courage and sacrifice of our officers and their survivors. I, along with many in the law enforcement community, am thrilled that the fallen will be honored in public ceremonies after two postponements,” LAAPOA President Marshall McClain says. “These gatherings also remind the nation of the incredibly difficult and dangerous work of law enforcement, who rush into harm’s way no matter the situation to uphold their oath and duty to protect the public — which is an important thing to remember during this time of heightened tensions between the police and the communities they serve.”

The Police Weekend ceremonies are also a time to reflect on those we’ve lost close to home, like Los Angeles Park Ranger Captain Albert E. Torres (EOW: October 12, 2019), Los Angeles Airport Police Officer Tommy Scott (EOW: April 29, 2005) and, most recently, LAXPD officers Michael Rasmussen and Andrew Marksbury. Rasmussen, a 24-year Department veteran, was killed on September 14 in a tragic motorcycle accident on his way home from work after departing the police station located at LAX Airport. Marksbury, a 17-year veteran, died in his sleep on October 4 following a short illness.

“Both of these officers were respected members of our law enforcement family and community,” McClain says. “Their untimely deaths are tragic and have left their immediate, extended and airport police families absolutely gutted. They are both greatly missed.”

LAAPOA has set up two PORAC Fund a Hero campaigns for the families of Officers Rasmussen and Marksbury. Please help us support both families during this difficult time by donating any amount you can afford. To contribute to the campaigns, please click here and here.