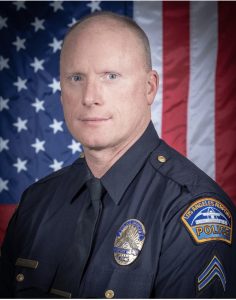 LAAPOA is saddened to announce the passing of Los Angeles Airport Police Officer III Andrew “Andy” Marksbury. He was a 17-year veteran of the Department.
On October 4, Marksbury died in his sleep following a short illness. His dedication and loyalty made him a valuable friend and partner. His love for his family, friends and his savior Jesus Christ was unwavering.
Marksbury began his career with the City of Los Angeles in 2004. He worked as a field training officer (FTO) and a detective assigned to the Crime Task Force at LAX. Marksbury loved investigations and his time as a detective; however, the difficult schedule and his desire to always put his family first forced him to step back to patrol.
At the time of his passing, Marksbury was more than halfway finished with his masters’s degree in homeland security.
Marksbury leaves behind his wife, Monica; children, Drew and Molly; parents, Dave and Claudia; and siblings, Kathi, Amanda, Matt and Dominique. His sudden and untimely passing is a tragic blow to his immediate, extended and police family.
“Andy was a great friend and respected member of our law enforcement family and will be greatly missed,” LAAPOA President Marshall McClain says.
A PORAC Fund a Hero campaign has been established to help the Marksbury family during this difficult time. Please donate any amount you can afford here. Any assistance is truly appreciated.