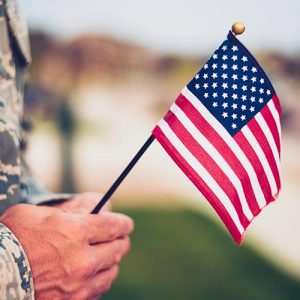 On November 11, 1919, President Woodrow Wilson signed a proclamation commemorating the end of fighting in World War I as Armistice Day. Wilson’s proclamation recognizes the armistice called between the Allied nations and Germany in 1918 — on the 11th hour of the 11th day of the 11th month. The truce preceded the signing of the Treaty of Versailles, which officially ended the war on June 28, 1919. In his recognition of the historic anniversary, Wilson said: “To us in America, the reflections of Armistice Day will be filled with solemn pride in the heroism of those who died in the country’s service and with gratitude for the victory.”

Congress passed a resolution for an annual observance in 1926, and the day became a national holiday in 1938. In 1954, in the aftermath of World War II and the Korean War, President Dwight D. Eisenhower signed legislation officially changing the name of Armistice Day to Veterans Day to honor American veterans of all wars.

Since Veterans Day was established, each year on November 11, people across the nation have paid tribute to American veterans, both living and dead, who have served our country honorably during war or peacetime. The day is especially meaningful to the law enforcement community, as it allows agencies to recognize the veterans within their ranks — the men and women who have traded one uniform for another.

“Our veterans in blue continue to serve their country by serving in their communities,” says LAAPOA President Marshall McClain. “Regardless of their rank and title or whether they have experienced combat, all of our veterans have made tremendous sacrifices for our freedom, and those who serve in law enforcement continue to make sacrifices by putting their lives on the line to protect and serve as police officers.”

According to an analysis of U.S. Census data performed by Gregory B. Lewis and Rahul Pathak of Georgia State University for The Marshall Project, 19% of police officers are veterans, and the profession represents the third most common occupation for veterans. This is likely because many veterans possess the same traits needed succeed in a law enforcement career, including discipline, teamwork and a desire to serve.

While veterans bring to the profession numerous transferable skills, they may also bring a unique set of experiences, some of which can be harmful. According to the U.S. Department of Veterans Affairs, varying degrees of post-traumatic stress disorder (PTSD) are common among veterans who have seen combat. For example, about 11 to 20 out of every 100 veterans (or between 11 and 20%) who served in operations Iraqi Freedom and Enduring Freedom have PTSD in a given year. If left untreated, PTSD can lead to depression, anxiety and, worst of all, suicide. The VA’s National Veteran Suicide Prevention Report revealed that there were 6,139 veteran suicide deaths in 2017, an increase of 129 from 2016, and confirmed that the rate of suicide among veterans continues to be higher than the rest of the population.

These statistics are staggering, especially from a law enforcement perspective, since veterans who are entering the ranks with PTSD or other mental or behavioral health issues may add to the growing number of officer suicides. In recent years, this has become a troubling epidemic in the law enforcement profession, as research indicates that officers are more likely to die by suicide than in the line of duty. It’s a topic that has gained intense media attention due to the rash of suicides by NYPD officers this year.

With the growing recognition of the intense emotional stress experienced by both veterans and law enforcement officers, lawmakers have begun taking action. Last year, the president signed an executive order on “Supporting Our Veterans During Their Transition from Uniformed Service to Civilian Life,” which addressed the vast number of suicides by veterans — an estimated 17 every single day — by automatically enrolling them for mental health care through the Department of Veteran Affairs. Just last month, Gavin Newsom signed into law SB 542, which allows first responders to seek workers’ compensation for post-traumatic stress caused by their jobs, giving them time to recuperate from high-stress and traumatic incidents. Police departments around the country are also intervening, with several starting initiatives to help support officer mental health and wellness.

“It’s not enough to honor our veterans on Veterans Day — we have to honor them each and every day,” says McClain. “One way to do that is by assisting them with their unique needs and challenges, and ensuring they have access to resources and services to successfully transition to civilian life after serving. That goes double for our brothers and sisters in blue who are veterans, and continue to endure stress and trauma as they give their all in the service of others.”

LAAPOA salutes our nation’s veterans today and every day. We thank you for your service, dedication and sacrifice.