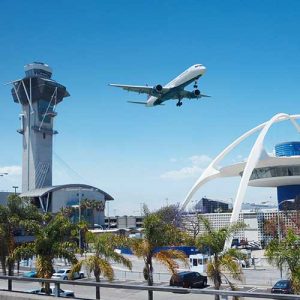 On November 22, the Department of Transportation announced its latest round of Airport Improvement Program (AIP) grants for fiscal year 2019, totaling $3.18 billion that will be distributed to airports across the country. The AIP program provides grants to public agencies — and, in some cases, to private owners and entities — for the planning and development of public-use airports that are included in the National Plan of Integrated Airport Systems (NPIAS). AIP grants are derived almost entirely from the Airport and Airways Trust Fund. The fund draws revenue from taxes and fees levied on airplane operations, which include taxes on airplane tickets as well as fuel used by general aviation aircraft.

So far in FY19, LAX has received a total of $42,453,587 in funding from the program. Of these funds, $35,624,684 will be applied to taxiway construction and miscellaneous airport improvements, such as the reconstruction and rehabilitation of facilities, emissions reduction measures, and the maintenance of taxiways and terminals. The remaining $6,828,903 will be allotted for noise mitigation efforts for properties surrounding LAX.

For fiscal year 2020, the House Appropriations Committee approved $3.3 billion for AIP grants, while the Senate allocated $3.35 billion. Both House and Senate appropriations bills are now waiting to be conferenced before the latest Continuing Resolution ends on December 20. Since FY17, the Department of Transportation has distributed $10.8 billion in AIP funds to airports across the nation.

Improvement funds can also come from the Passenger Facility Charge (PFC) program, which allows the collection of fees up to $4.50 for every eligible passenger at commercial airports controlled by public agencies. Airports use PFC fees to fund FAA-approved projects and pay debt services. AIP funds, however, are discretionary and cannot be used for finance costs or debt services. Airports that collect higher passenger facility fees receive a lower allotment of airport improvement funding.

Airlines also contribute to airport capital improvements, particularly when they have a significant presence at a facility. American Airlines, for instance, is funding a $1.6 billion renovation of its LAX terminal. Back in October 2018, LAX owner Los Angeles World Airports (LAWA) said the airline-funded project was the biggest single-airport investment American Airlines has ever made.

Delta is also improving its facilities at LAX with a $1.8 billion terminal modernization project. The renovation is part of the airline’s $12 billion U.S. capital initiative.

“AIP grants bring significant funds to airports across our country,” LAAPOA President Marshall McClain says. “Passengers pay for these when they purchase their tickets and airlines contribute through fuel taxes. Last year’s 2018 FAA Reauthorization Bill definitively included counter-drone technology as AIP-eligible. It is important that LAX continue to advocate for our fair share of these funds and lead in areas of groundbreaking capabilities.”

With every year of funding the Department of Transportation provides to the AIP program, airports across the country are able to invest in necessary upgrades to their operations and facilities to ensure passenger safety and security.