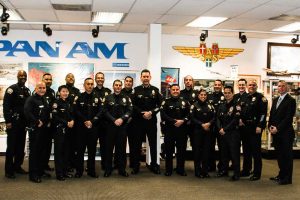 As part of our ongoing efforts to highlight our members, we’ve profiled individuals who are doing remarkable work in moving our profession forward. But the story of LAAPOA is also the story of the specialized units that make up the departments we represent, and the skills, training and expertise that make our members indispensable in keeping our airports, parks and communities safe. This time, we’re turning the spotlight on the Los Angeles Airport Police Department’s detectives and their role in protecting LAX and its surrounding areas.

“Seeing how my mom was able to bring justice for many victims inspired me to want to follow in her footsteps in becoming a detective,” Detective Erica Villanueva shared when LAAPOA featured her in our “Women of LAXPD” series. Now, she and Detective Ben Spolarich are giving us a more in-depth look at how LAXPD’s detectives seek justice for victims by investigating cases and filing criminal complaints with the court. LAAPOA Treasurer Spolarich has been a police officer for 21 years, most of them with the Los Angeles Airport Police. After starting at LAX in January 2000, he transferred to the Los Angeles Port Police after 9/11 and then to Ontario Airport in 2004. He was transferred back to LAX in 2009, assigned to investigations/CTF in 2015 and officially promoted to detective in 2016. Villanueva is a 14-year veteran of the Department, has been a detective for seven years and recently completed a two-year term representing Van Nuys Airport on the LAAPOA Board of Directors. Together, they answered our questions about Detective Bureau’s mission, challenges, opportunities and successes.

What is the role of the Detective Bureau in LAXPD, and what makes it unique compared to other units?

The detectives are responsible for a number of key functions, including filing criminal cases, conducting follow-up investigations into criminal complaints, immediate response to crimes in progress, and overall training and facilitating reporting improvements. Detectives are unique in that they get to see the other side of the investigation from when patrol officers file the initial report. Detectives are responsible for all the follow-up investigation to turn the initial report into a viable criminal complaint to file with the court. We are also tasked with ensuring report writing and investigative techniques by officers are followed and meet the elements of the crime (as defined in penal, vehicle and H&S statutes/laws).

What are the duties of Airport Police detectives?

Detectives regularly conduct surveillance and plainclothes work to help build a better case against suspects of criminal activity at the airport. However, we do not just investigate crimes that occur within LAX. Oftentimes, we find ourselves in surrounding cities and counties during our follow-up investigations. While there is a large focus on insider theft (crimes committed by employees), much of the criminal activity at LAX is committed by people who must enter the airport with the specific intent to perpetrate their crimes.

What is the history of the unit, and how has it evolved over time?

The Crime Task Force is a joint unit with LAPD at the helm. In 2011, we morphed from a crime suppression team, which was tasked with only crimes within LAX, to the joint unit we are today. A large spike in criminal activity made it possible for LAPD to insist we begin a joint venture and created the LAX LAPD Crime Task Force. We are now responsible for handling all Airport Police officer–made arrests, any follow-up to LAXPD officers’ initial criminal reports and any investigations deemed necessary by management. Over the years, LAXPD has grown and developed professional investigators who know the ins and outs of the airport and truly believe in the safety and security of all within LAX.

How many officers currently make up the unit, and how does that compare to past staffing levels?

We have a total of 17 detectives, which is smaller than usual. Most agencies, no matter the size, maintain approximately 10% of the workforce for investigations. Our agency is approximately 500 officers (up to and including the Chief), so by that math, we should have around 50 detectives. This is something that should be beefed up!

The seven main detectives work side by side with LAPD officers assigned to the unit. Many times, the LAXPD personnel have much more experience than their counterparts, and all the detectives assigned to the unit are certified as experts in at least one field of study by the POST Robert Presley Institute of Criminal Investigation (ICI).

Over the years, our numbers have dwindled and replacements have not been made; generally, management cites budgetary concerns. However, LAPD is always ready to staff the openings with their own people. LAXPD detectives and LAAPOA do their best to ensure the numbers remain fair and equal, but would like to see LAXPD stand alone.

How do officers join the unit, and what kind of background, experience and training do they need?

When openings are available, an officer simply has to apply for the internal promotion. LAAPOA is currently attempting to solidify the position of detective, to ensure a rigid career track for individuals seeking to remain as investigators. Under the current system, an officer could be assigned to the unit as a detective for a temporary basis (based on further promotion or transfer to another unit). While current detectives would request potential candidates to have taken the initiative to better prepare themselves for the position by attending investigative training courses, the current standard does not require that. It is important to note that officers wishing to join the ranks of detective must understand the functions are much different than that of a patrol officer. The amount of paperwork is sometimes overwhelming, and with constant changes to the court reporting system, as well as the LAPD requirements (in which we operate), a simple criminal case filing could require hours of extensive follow-ups and documentation before presenting it to the city attorney or district attorney.

What are some of the unit’s most noteworthy accomplishments?

Our detectives handle most cases at LAX. Even though we have a standing agreement that states more complex crimes will be investigated by LAPD, our detectives have handled these cases successfully. Generally, higher-profile cases have been automatically given to LAPD to investigate. With the assistance of LAAPOA, our detectives have pushed forward and taken on the investigative lead on an attempted homicide, child abuse, major robbery, burglary from motor vehicle with large-dollar-value items taken and major theft from motor vehicle nuisance crimes involving several outside agencies in the South Bay area.

What are some challenges the unit is facing right now, and how can they be overcome?

We need more officers assigned to ensure LAPD does not grow their footprint larger. We need actual detectives to ensure we can continue to do our jobs without the fear of rotation. We need the ability to promote within the investigative unit as senior detectives. We need the support of our management to ensure we can separate from LAPD and staff a standalone detective unit to do the same things we currently do.

What makes being a detective at LAX different from other airports, as well as from non-airport law enforcement agencies?

We are one of the busiest airports in the nation, and as such, we have more criminal activity. Our detectives have investigated professional theft rings who travel from airport to airport, as well as different jurisdictions, committing crimes. We have a vested interest in ensuring the employees, passengers, airline personnel and stakeholders have a safe environment. We do our best to ensure justice for the victims who are at LAX, and attempt to convey the same to the court system. Working at the airport, we interact with many different law enforcement agencies and must ensure we do not encroach on others’ territory when investigating crimes.

What are some of your favorite parts of the job?

We both agree: We like it when our cases get filed by the court. It is satisfying when our efforts and hard work actually show to be fruitful and that the court agrees that a criminal must be held for hearing. If a crime is committed, it is satisfying to see the results of all our hard work pay off in the filing of a criminal case and getting justice for the victim.

What do you think people outside the unit might be surprised to learn about its members?

While there is no internal directive or policy that dictates the standards for LAXPD detectives, they hold themselves to the higher standard of ICI certification. This is not a requirement, but a self-imposed proclamation among the detectives to show they are capable and ready to handle any and all criminal investigations at LAX.

Is there anything else you want readers to know?

The LAXPD detective unit has made huge strides over the years and is ready to stand alone. We have shown our ability to successfully handle major criminal cases and ensure proper reporting within the systems we are provided. We are ready for the opportunity to promote within the unit, as senior detectives (as with other agencies), and train the new generation of detectives at LAX.