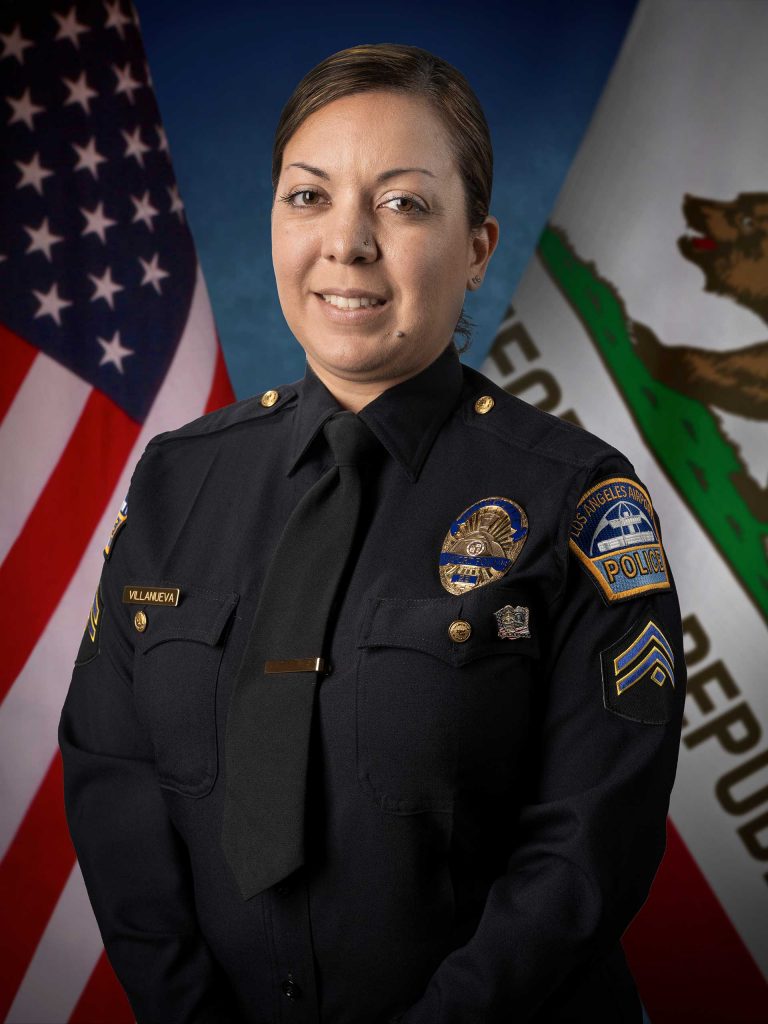 In our new series of articles entitled “The Women of LAXPD,” LAAPOA highlights the women who make the Los Angeles Airport Police one of the most diverse departments in the country, with an emphasis on the female leaders who’ve helped move the profession forward. Read Part 1 and Part 2.

Detective, leader, wife, mother, glass-ceiling breaker: These are all words that describe LAXPD Detective Erica Villanueva, who, like Assistant Chief Latasha Wells Amerson and many other women on the Department, is paving the way for the next generation of female law enforcement professionals. Villanueva is a 14-year veteran who began her career at age 22, fulfilling a childhood dream and following in the law enforcement footsteps of her mother, a former detective with the LAPD. Through hard work and dedication, she moved up the ranks and promoted to detective, where she investigates airport-related crimes, conducts follow-up investigations, interviews criminal suspects and victims, testifies in court proceedings and more.

Upon joining the Department, Villanueva also became a member of LAAPOA. She most recently completed a two-year term representing Van Nuys Airport on the Board of Directors. She took the role, she says, because she wanted to not only become more involved with the union, but also get a glimpse of what goes on behind the scenes on the political side of law enforcement. As a director, she was involved in decision-making to help better the Department and presented members with transparent information on what the union does on their behalf. She also saw firsthand how LAAPOA supports women by encouraging them to get involved in union leadership positions.

LAAPOA caught up with Villanueva to talk about her achievements, as well as her experiences as a woman in law enforcement and her perspectives on issues facing female officers and what their male colleagues can do to support them.

Did your mother inspire you to go into law enforcement? What is it like following in her footsteps?
When I was around 10 or 11 years old, my mother became a newly appointed LAPD detective, working for the Child Abuse Unit. Around that time, she brought me to work on what the LAPD and the City of Los Angeles used to call “bring your daughter to work day.” In my mother’s unit I saw how many kids had been unfortunately mistreated and how they needed an advocate to help them have a voice and bring those who abused them to justice. Seeing how my mom had numerous cases and how she was able to bring justice for many victims inspired me to want to become a police officer and follow in her footsteps in becoming a detective.

Becoming a detective like my mother is pretty awesome because she was first-generation law enforcement in my family, and now I’m second generation. So I’m hoping we can keep the female generational line going, as it’s something that not a lot of women do, especially in law enforcement since it’s a predominantly male profession.

What accomplishments are you proudest of in your career?
I’m proud of the fact that I promoted to detective while juggling the job full time, having a husband and being a mother of three children. It was hard work and dedication, but I’m glad it paid off. I’m also proud that I was able to participate in the Airport Police Department’s first women’s Baker to Vegas team in 2019. It was the hardest I’ve ever trained since the Academy, and I’m glad I got to experience it.

What has your experience been like as a woman in law enforcement?
My experience as a female police officer is that the profession is pretty male-dominated. As a woman, you have to be able to hold your own when it comes to dealing with suspects, and at the same time, not be so emotional when you come across something that might hit home. Women have to be able to have thick skin, but at the same time be compassionate. So it’s sometimes very hard to balance, especially around men.

What challenges have you faced, and how have you overcome them?
One of the challenges I’ve faced is trying to balance my cases, while at the same time being pulled in 20 different directions to help my fellow detectives with their cases. I’ve overcome this challenge by taking it one step at a time and taking it day by day, because at the end of the day, I’m only one person.

What have been some of your most rewarding moments?
One of my most rewarding moments happened when I was in patrol. I came across a young mother who was stranded at the airport with her two young sons. I tried to get the airlines to help her out, but luckily a good Samaritan overheard her story and bought her and her sons plane tickets to get back home. I also gave her some money to buy some food. I talked to her for a bit and I explained that I knew how hard it was being a single young mother. I told her my struggles and how I was really young when I had my twins and how there are programs out there to help her. I told her my kids were my motivation to be where I was. I really hope it made an impact on her. I always try to show people that not all police officers are bad; we are human, too.

What are some of the issues you see facing women in law enforcement, and how do you think they should be addressed?
An issue I see facing women in law enforcement is not enough promotions. I think because this career is male-dominated, maybe sometimes men in upper management feel we can’t do the jobs of upper management. Women should be given the chance to promote more often. There has to be an equal balance. I’m not saying women need to take over, but they at least need to be given a fair shot.

How can male officers and agency management show their support for female officers?
Male officers and management can show female officers support by being understanding of the fact that us women in this line of work have to be able to find balance with our home and work lives. Women in law enforcement have many hats to wear. I think a lot of men don’t see that. We are mothers, wives, caregivers, sisters, aunts, girlfriends and friends. We rush alongside male officers to help victims, and we also help take down suspects. I think they don’t understand that we try our best and try hard to prove ourselves to be as capable to do the job as them. We just want some recognition sometimes.

Why do you think it’s important for women to be represented in law enforcement? How can more women feel welcome and succeed in this field?
It’s important for women to be represented in law enforcement because, in our roles, we can encourage and show young girls that they can do this job, that women can also make a difference in their communities and that we are here to help those who don’t have the resources to get help. As women in this field, we should always encourage each other to succeed and support one another when one of us breaks that barrier and promotes, because that gives all women in law enforcement hope that they, too, can achieve their goals in this line of work.

What is your advice to women considering joining law enforcement or just starting out in their careers?
My advice to women out there is to never give up. There are days when it’s tough to do this job, but always think back to when you wanted to begin this career in the first place and that drive you had to make a difference.

I have twin girls, and I had them very young, so I was what you would call a “statistic.” I broke that statistic by graduating college, joining the police department and promoting to detective. I also met my husband in the Academy and we have a son. My twins are in college, and I can say they are on the right path. One twin wants to become a police officer like me and my mom after she graduates next year. The other twin will be graduating from nursing school this year. So I can say I broke many glass ceilings.