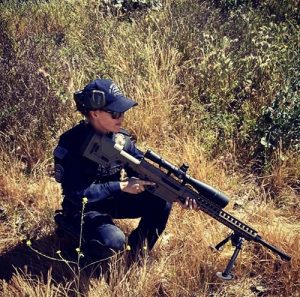 In December 2007, Reader’s dream became a reality when she joined LAXPD as a patrol officer, a position she held for seven and a half years before working as a field training officer for nearly two more years. In 2016, Reader was assigned to her current position as an ESU operator. The role requires officers to act quickly and effectively when an active shooter, aircraft hijacking, barricaded suspect or any other high-stakes situation occurs, and also includes “assisting our Dignitary Protection Unit with presidential details, providing annual Department-wide Multi-Assault Counter-Terrorism Action Capabilities training and helping our detectives with high-risk warrant services,” Reader explains.

The ESU was established shortly after the 9/11 terrorist attacks to prevent similar tragedies from occurring at one of the busiest airports in the world. But before Reader took on her new role, she had to first complete an 80-hour SWAT school. While challenging at times, the experience proved to be extremely fruitful.

“I proved to myself that I was capable of overcoming something that I wasn’t really sure about,” Reader says. “I honestly did not know what to expect in SWAT school, but I just took it day by day. Nearly every day of those two weeks was packed with things that I’ve never done before, and it was an amazing learning experience for me.”

One of those new experiences for Reader came at the very beginning of SWAT school. “I found out about two months beforehand that I would be required to do six dead-hang, overhand pullups, and if you cannot pass the test, you’re sent home,” she shares. “I hate to admit it, but I had never done a single pullup, and I had no idea how to even do one. It was definitely intimidating, but I worked at it day and night until I learned the proper technique and could build up enough upper-body strength. I was the only woman in the class, and the determination to overcome this obstacle was definitely there. I did not want to put a negative light on myself, or women in general, by failing and being sent home.”

Through dedication and strong determination, Reader passed the physical fitness test — and SWAT school — with flying colors. “It takes preparation to build up the physical strength and cardio fitness needed to pass the ESU and SWAT school physical fitness qualifiers (PFQs),” she says. “Without preparing in advance, they can be difficult tests, whether male or female. The tests are meant to be physically challenging, and to prove that you have an equal balance of full-body strength and endurance.”

When asked what it meant to be the first female ESU operator in LAXPD history, Reader’s answer was an easy one. “My goal wasn’t to make Department history as the first female in ESU,” she explains. “It was to just be given a chance in the unit so that I can work with trained operators and learn various weapons and tactics. Other departments have had, or currently have, women on their tactical teams. Many women also serve or have served in the military, and they have seen and done more than I have. So being the first female in this unit isn’t something that I see as a big deal. I guess it means breaking barriers for our Department, so that’s something I take pride in. It does make me happy that new female officers coming into the Department can see women working in our specialized units, and I hope that this can help motivate young women and men to go for the things that they want to do.”

Reader is a firm believer that the challenges that arise from such a risky and intense job often come down to “personal weaknesses and level of skill, training and real-life experiences” rather than anything gender-specific. “A suspect’s actions dictate how we respond, and we just need to be flexible,” she says. “Overall, learning tactical movements for every type of possible outcome has been a challenge, but the more we train together as a team, the easier it is becoming for me. It’s still challenging at times, but that’s all part of the process.”

Reader often trains on her own time in order to be prepared for any and all circumstances that come her way. “I enjoy running but get bored during weight training, so I have to put time aside and force myself to keep up with my upper-body strength,” she says. “Some women are into weight training and CrossFit and can probably lift me, 125 pounds, a few times without stopping. The important thing is knowing this so that I’m able to actively work on it. I keep a pull-up bar hanging from my bedroom to stay motivated.”

Likewise, Reader advises fellow women wanting to follow in her footsteps to be mindful of what they can improve on so that an initial weakness may become a strength. “Be ready to challenge yourself and do not accept the bare minimum for yourself,” she says. “I know there are differences of opinion on a woman’s ability to gain entrance and perform in a traditionally male-dominated subculture, such as being on a tactical team, but it’s important to be aware of personal weaknesses so that you can work harder to improve in those areas. Prepare in advance for anything and everything.”