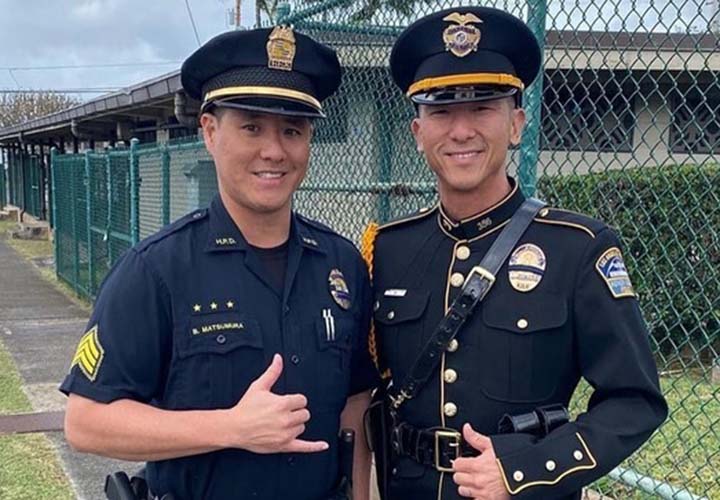 May is Asian American and Pacific Islander (AAPI) Heritage Month — a time for our nation to recognize the history, traditions, culture and achievements of AAPIs in the United States. It is also a time to advocate for their safety, equity and well-being, which is more important than ever due to the unprecedented rise in anti-Asian hate crimes over the past year-plus since the start of the coronavirus pandemic. In honor of AAPI Heritage Month, LAAPOA wants to shed light on this event’s history and significance, the recent attacks against the AAPI community and how law enforcement have been combating these crimes.

“In the face of these hate-fueled attacks, it’s important for us to stand together and denounce the senseless violence that’s being directed at our AAPI communities,” LAAPOA President Marshall McClain says. “This month is a time for us to educate ourselves and become better allies so that we can help amplify the voices of AAPIs and the issues affecting them. We are stronger together.”

The roots of the commemorative month trace back to 1977, when New York Representative Frank Horton introduced House Joint Resolution 540 to proclaim the first 10 days of May as Asian Pacific Heritage Week. Later that same year, Hawaiian Senator Daniel Inouye introduced similar legislation in the Senate. Neither resolution passed, but that didn’t deter Representative Horton; the following year, he introduced House Joint Resolution 1007, which proposed that the president should “proclaim a week, which is to include the seventh and tenth of the month, during the first ten days in May of 1979 as ‘Asian/Pacific American Heritage Week.’” The resolution passed both houses of Congress and was signed by President Jimmy Carter on October 5, 1978. In 1990, Congress passed Public Law 101-283 to extend the observance to a month. Two years later, in 1992, Congress passed Public Law 102-450, which officially designated May as Asian Pacific American Heritage Month. (Click here and here for detailed backgrounds of the resolutions and public laws from the Library of Congress.)

The month of May was chosen to commemorate two significant events in AAPI history: the arrival of the first wave of Japanese immigrants to the U.S. on May 7, 1843, and the anniversary of the completion of the transcontinental railroad on May 10, 1869. The backbreaking labor of more than 20,000 Chinese immigrants made the construction of the railroad possible — a contribution that has largely been ignored or overlooked by history.

AAPI Heritage Month is not just for AAPIs; it’s a celebration that invites people of all backgrounds to learn more about the various cultures that make up the AAPI community. This year, due to pandemic restrictions, many have decided to engage with AAPI history and culture online through discussions, virtual museum tours, concerts and more. People have also chosen to donate to AAPI organizations and support AAPI businesses online or in their own neighborhoods. (Click here for a guide on where to access AAPI educational resources, books, movies and more, and here for tips on what you can do to help the AAPI community).

Today, there are an estimated 22.9 million Asians and 1.6 million Native Hawaiians and other Pacific Islanders in the United States, per the U.S. Census Bureau in 2019. The Pew Research Center showed in a recent analysis that Asian Americans were the fastest-growing racial or ethnic group in the U.S. from 2000 to 2019, and that their population is projected to surpass 46 million by 2060. Pew also notes that the population is by no means a monolith, reporting that a “record 23 million Asian Americans trace their roots to more than 20 countries in East and Southeast Asia and the Indian subcontinent, each with unique histories, cultures, languages and other characteristics.”

Anti-Asian Hate Crimes on the Rise

The xenophobic and anti-Asian rhetoric that emerged during the pandemic exacerbated racially motivated incidents against the AAPI community. Across the country, there have been countless reports of Asian men and women of all ages being assaulted and harassed, with incidents ranging from verbal abuse and threats to serious acts of physical violence, such as being punched in the face, kicked or pushed to the ground, shot at and more. Asian-owned businesses and restaurants have also become targets of vandalism and looting. High-profile incidents such as the Atlanta spa shootings, which claimed the lives of six women of Asian descent; an elderly man in San Francisco dying after being brutally shoved; and a Japanese Buddhist temple in Los Angeles being set on fire by vandals have stoked fear in and traumatized AAPI communities — and the incidents continue to rise each day.

A report by the Center for the Study of Hate and Extremism at Cal State University, San Bernardino found that hate crimes toward AAPIs surged by 169% in 15 major cities, continuing the “historic” increase in such attacks last year. Statistics compiled by Stop AAPI Hate, a group established to track incidents of hate and discrimination against AAPIs, revealed that self-reported incidents of racism and hate crimes jumped from a cumulative 3,795 between March 2020 and February 2021 to 6,603 within just one month in March 2021. The attacks have created widespread fear among Asian Americans. A recent Pew Research Center survey found that one-third of Asian Americans fear threats and violence. Researchers expect the number of attacks to continue to increase as pandemic restrictions lift nationwide.

The Department of Justice’s COPS Office says that such attacks impact more than just the immediate victim and their family; “they also traumatize the communities in which they occur. These acts make groups suspicious and fearful of one another and restrained from engaging in civic life or working with local law enforcement in investigating and preventing crime.” For that reason, law enforcement across the country have been at the forefront of not only combating AAPI hate crimes, but also working to establish trust with the AAPI community during these difficult times.

In Los Angeles, the LAPD has increased patrols in places where many AAPIs live and work, such as Chinatown, Koreatown and Little Tokyo. The department has also been making concerted efforts to strengthen its relationships with the AAPI community by holding forums to solicit input on how police can better serve the community and to educate the community on how to report bias incidents. The LAPD has also been working with Stop AAPI Hate to launch a campaign that provides in-language information cards with helpful resources to victims of hate, an effort they hope will encourage more AAPIs to come forward if they witness or become a victim of a hate crime. In New York, the NYPD’s Asian Hate Crime Task Force has been conducting outreach with Asian Americans, deploying undercover and plainclothes officers in Chinatown, Flushing, Queens and other Asian communities, meeting and speaking directly with community members, conducting anti-hate seminars and workshops and much more. These efforts in Los Angeles and New York mirror what many departments are doing across the country — increasing police visibility in AAPI communities, building connections, educating the public, encouraging the reporting of incidents and hate crimes and showing AAPIs that police have their backs.

At the LAXPD, the nation’s largest majority-minority police force, Chief Cecil W. Rhambo Jr., who is of African-American and Korean descent, has in the face of these hate crimes reinforced the Department’s standards for fair, constitutional and unbiased policing that serves the diverse international community at LAX.

“We stand in solidarity with the AAPI communities in Los Angeles and throughout the world and denounce any expressions of anti-Asian hate in any form,” Rhambo says. “The LAXPD is one of the most diverse law enforcement agencies in the state of California. Approximately 16% of our officers are of Asian or Filipino descent and have the language skills to communicate with people from a wide variety of Asian cultures who travel in and out of one of the world’s busiest international airports.

“Additionally, the LAXPD has zero tolerance for hate, bias, racial or religious discrimination, disability and homophobia in all its forms. Our staff are highly trained and exemplify the true essence that all should be treated with respect and dignity,” Rhambo continues. “Our goal at LAXPD is to ensure that passengers and guests from all walks of life feel welcomed and safe as they arrive or depart from our gateway to the world.”

LAAPOA Board member Fran Sur, who hails from Hawaii and is of Korean descent, says the recent attacks, while alarming, have been something law enforcement has been dealing with for quite some time. He argues that recent efforts to defund the police have contributed to an environment that allows such crime to occur more frequently and that the attacks signal the need for more officers on the streets to combat hate crimes.

“LAAPOA has always stood in solidarity with all groups targeted by hate crime; however, many of the fundamental problems we are seeing, including crimes against the AAPI community, are not new and everyone should push harder to separate the media narratives from reality,” he says. “With the recent ‘defund the police’ movement, violent crimes as a whole are going up at a rapid rate. The bigger picture is that our country’s streets are becoming more and more unsafe by cutting law enforcement. Do we need police reform? Of course we do. But it needs to be sensible and meaningful. The last thing any community needs is less policing.”

In addition to local, state and federal law enforcement working to respond to and prevent these crimes, action is being taken legislatively. President Joe Biden recently signed into law the COVID-19 Hate Crimes Act. During the signing ceremony, the president said, “For centuries, Asian Americans, Native Hawaiians, Pacific Islanders, diverse and vibrant communities have helped build this nation only to be often stepped over, forgotten or ignored. My message to all of those who are hurting is, we see you. And the Congress has said, we see you. And we are committed to stop the hatred and the bias.”

“We remain committed to supporting and defending our AAPI community and all communities of color from acts of racism — hate has no place here,” McClain says, adding that LAAPOA has been calling on the City of L.A. to investigate numerous incidents of racial, gender and other discrimination at LAWA. “LAAPOA has brought questionable incidents of discrimination to the attention of Mayor Garcetti and his staff, and we are hopeful those matters will be resolved soon.”