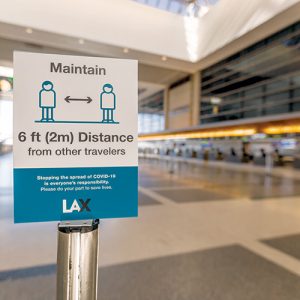 In this three-part series of articles entitled “Never Let a Good Crisis Go to Waste,” LAAPOA will be exploring how the COVID-19 health crisis is affecting public safety operations in California and across the country, with a particular focus on how some officials are using the pandemic as an opportunity to advance harmful criminal justice reform agendas.

COVID-19 has impacted every aspect of our lives, including public safety. Law enforcement working the front lines of the pandemic have been inundated with a new set of challenges that have made their already difficult jobs even more difficult, stressful and dangerous. In particular, statewide shutdowns and shelter-in-place orders across the country have forced officers, park rangers and other public servants to perform the near-impossible task of enforcing social distancing guidelines prescribed by health officials.

“In California, as in many other states, ensuring that people maintain a 6-foot distance, wear masks and avoid large gatherings has been challenging for officers because it’s neither a law nor a crime to ignore public health guidelines,” says LAAPOA President Marshall McClain. “There are also no hard and fast rules on how to enforce those who choose not to follow this ordinance.”

Given the unprecedented nature of this public health crisis, there are no uniform policies or guidelines regarding social distancing across the state, with enforcement varying from county to county and city to city. As a result, some areas have been stricter than others when it comes to enforcement, ranging from simple verbal warnings to hefty fines. For example, Manhattan Beach has been enforcing a zero-tolerance policy on social distancing since the beginning of April, issuing citations of up to $1,000 to violators. In contrast, in Orange County, thousands of residents recently ignored social distancing rules and flocked to local beaches. Based on widely publicized photos of crowded shores, physical and social distancing rules were largely ignored and few people, if any, were cited by law enforcement.

And then there are some areas of the state that have outright defied the governor’s stay-at-home order. In Northern California, Modoc, Yuba and Sutter counties recently reopened, allowing residents to patronize shopping centers, restaurants and more while adhering to certain health guidelines. However, it was reported that many who rushed to the Yuba Sutter Mall in Yuba City did not wear masks or adhere to the 6-feet-apart rule.

“It’s also difficult to truly enforce such guidelines when the governor called for an ‘encourage rather than enforce’ approach at the onset of the statewide shutdown,” McClain adds.

In addition to being told by the governor to apply “social pressure” and employ the power of persuasion rather than issue violations to those refusing to stay home, many departments are instructing officers not to physically respond to certain calls and not to make as many arrests. For example, both the LAPD and LASD ordered officers in March to “cite and release” as much as possible, and the LASD has been releasing inmates and cutting down how many people it books into custody. These actions have led to a decrease in arrests and have likely helped to create an environment that encourages crime. “Since people know that cops are limiting arrests, they are more likely to try to commit crimes because of the high likelihood of not getting caught,” McClain says.

While police try to balance social distancing enforcement with their typical law enforcement duties, the Legislature has added another layer of difficulty — granting the early release of inmates. In late March, lawyers for Governor Newsom said the state intends to expedite release and parole dates for 3,500 inmates serving terms for nonviolent crimes and already due to be released within 60 days. The move, which came after the governor’s executive order suspending the intake of new prisoners into both state and juvenile facilities, is intended to ease prison overcrowding to slow the spread of COVID-19 in California’s 35 prisons, but it comes at a cost to public safety.

“It’s no secret that crime rates have swelled due to early-release legislation,” says McClain. “The Legislature is using this health crisis as an opportunity to push the agenda of releasing more prisoners. By putting former inmates back on the streets, they are endangering our communities and our officers and setting the stage for crime to occur.

“The decision to release inmates early is not unique to California; it’s happening all over the country. The decision to do so creates unnecessary burden for officers already overwhelmed with policing during a pandemic,” McClain says.

On top of everything that officers are grappling with, they are expected to enforce public health orders without the proper safety equipment. The shortage of personal protective equipment (PPE) and sanitizing gear in departments nationwide has many officers performing their duties without adequate protection, putting their lives and the lives of their loved ones at risk. At the time of this writing, more than 90 officers have died in the line of duty due to COVID-19.

There is also a shortage of manpower. Many departments are receiving hundreds of calls daily from residents who are concerned about people or businesses in their neighborhoods violating social distancing orders. “It’s virtually impossible for departments, which are woefully understaffed, to investigate all instances of non-compliance when there are true emergencies that require more immediate attention,” McClain says.

“As state slowly begins to ease its stay-at-home ban, only time will tell what other rules, orders, ordinances, restrictions, etc., officers will be forced to enforce as this pandemic continues,” he says.

By David E. Mastagni and Taylor Davies-Mahaffey Prior to January 2019, access to… Read More »

As Labor Day approaches, it’s important to keep in mind that this holiday isn’t… Read More »