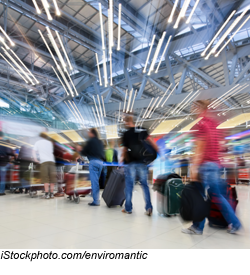 While some say that total security is an unattainable dream, implementing commonsense protocols to fortify security must and should be a reality.

In November 2013, a gunman entered Los Angeles International Airport and killed a TSA agent. Six other people were injured. Over three years later, the tragic shooting at Ft. Lauderdale-Hollywood International Airport claimed the lives of five more people. These are just two of the many incidents, both at home and abroad, that continue to highlight the security gaps at our nation’s airports and remind us that airports continue to be vulnerable.

As part of the American Alliance of Airport Police Officers, I met with then-TSA Administrator John Pisotle in September 2012 and sent a follow-up letter providing five commonsense, low cost/high benefit recommendations to increase airport security, which he ignored. Had Administrator Pistole taken our concerns seriously and put into effect the suggestions we proposed, it is quite possible that no one would have died or been injured at LAX.

Among the recommendations AAAPO made to the TSA in 2012 were 1) having an armed local law enforcement officer located within 300 feet of the TSA security checkpoint, which is the last barrier to stop threats from reaching planes, 2) giving police real-time access to all existing airport cameras and 3) screening all airport employees — all very basic requests that most Americans probably think exist. They don’t. None of them have been implemented by TSA.

So, what has TSA done in the last few years to improve airport security?

A leaked DHS Inspector General report from 2015 found that in 67 out of 70 attempts, undercover agents were able to smuggle mock explosives and weapons through TSA checkpoints. This is a shocking 96% failure rate and highlights how the TSA is failing at its most critical mission of screening all passengers and luggage to ensure a threat does not reach a plane. This definitely does not improve airport security.

TSA’s behavior detection officer (BDO) program provides brief training to TSA screeners so that they can roam an airport to detect threats. These screeners use a checklist system to identify threats and after a definitive number of checklist items have been identified, BDOs call airport police. Airport police have responded to thousands of BDO calls with not one yielding a legitimate threat. TSA wasted $1 billion on this program, and I can tell you firsthand that taking our officers away from their core duties for this nonsense actually impedes, not enhances, security. This certainly does nothing to improve airport security.

TSA’s Visible Intermodal Prevention and Response (VIPR) teams consist of federal air marshals, BDO agents and TSA agents, among others, augmenting security at airports. Removing federal air marshals from planes to do work on the ground makes no sense, given the ongoing threat in the air. This program is nothing more than security theater, as VIPR teams mostly appear when TV cameras arrive at airports. This does absolutely zero to improve security.

Most recently, in light of the Ft. Lauderdale airport shooting, DHS Secretary Jeh Johnson proposed the creation of airport operations centers to be staffed by various entities, including airport operators and security, local law enforcement, the airlines, TSA and CBP. An airport operations center will undoubtedly create more unneeded layers of bureaucracy at our airports and only confuse a system that TSA continues to try and break. Adding more cooks in the kitchen will only hamper the whole process and potentially jeopardize police response operations. This will not improve security.

Time and again, TSA management has failed the traveling public and its own employees by taking its eye off the ball. TSA must be focused on screening passengers and bags, and leave security and public safety decisions to airport police.

With a military mind taking charge at DHS, I hope the new administration and Congress will take a fresh look at our nation’s airport security protocols and seek to implement proactive measures to improve aviation security — for the sake of the traveling public.