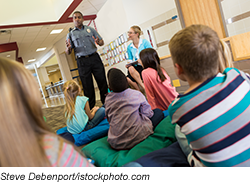 In July, after the tragic shooting that killed five officers, Dallas Police Chief David Brown issued a call to action to police critics, encouraging them to become part of the solution and serve their communities.

“We’re hiring,” Brown said at a press conference on July 11. “Get off that protest line and put an application in, and we’ll put you in your neighborhood, and we will help you resolve some of the problems you’re protesting about.”

And the community responded, with a 243% surge in applications to the department. Similarly, departments in Orlando and Baton Rouge saw upticks in applications after tragedies there. It’s a heartening sign for agencies across the country, in light of the last couple of years’ overwhelmingly negative coverage of police and use-of-force actions, which has exacerbated existing recruitment issues.

“It’s obvious that people want to directly participate in solving problems in their communities,” says LAAPOA President Marshall McClain. “Departments across the country, including ours, need to harness that desire and build their ranks, not just in the immediate aftermath of these tragic events, but over the long term. We are desperate for recruits, so we need leaders in all organizations to remind the public that police officers are real people doing good and encourage young people to consider the field of criminal justice as a legitimate career choice.”

Long before events in Ferguson, Baltimore, New York and Baton Rouge tarnished the image of the badge, departments’ ranks had already been decreasing, due to baby boomer retirements, military call-ups and fewer new officer applications. Lingering effects of the recession — public safety budget cuts that resulted in forced layoffs, and reduced salaries and benefits packages for new officers — have compounded the problem and further reduced agencies’ ability to attract candidates. Add that to changing work expectations of younger generations, the expanding responsibilities of police and a shrinking pool of qualified candidates, and the viability of long-term public safety staffing is facing a crisis.

“Under-resourced departments, overworked and stressed officers, and lack of support from the community are not the way to move forward,” says McClain. “At a time when even legitimate police uses of force are potential sources of riots and public criticism, it’s time for government officials, as well as police critics and community leaders, to go beyond calling for reform and actually do something to change the environment that cops work in — both inside the station and out.”

“As we wrote about last year, cops are the community, too,” continues McClain. “They are all races, ages and genders. They contribute countless volunteer hours as private citizens, mentoring kids, helping the poor and improving their neighborhoods.”

On the job, though, officers are spending less time fighting crime and more time dealing with the unfair burden of those who have fallen through the cracks in the mental health and social services system. Because these problems have contributed to the number of police interactions with troubled individuals, “We need to have honest, public conversations about these service gaps,” says McClain. “Those in positions of power need to work at solving these problems, and they also need to encourage their constituents to work with the police, not against them. Police are not the enemy. Poverty, crime, drugs, poor schools and lack of services are.”

By using their influence to highlight the good work of officers and encouraging citizens to partner with their departments, especially in underserved minority neighborhoods, community leaders can strengthen positive connections between departments and those they serve, as well as bolster the diversity of the police force.

Help From All Sides

“There are many ways to support these efforts, and we call on everyone to do so now and into the future,” says McClain. “We ask political leaders to highlight officers’ heroism in both traditional and social media. We ask them to financially support departments, whether at the federal level through COPS hiring grants or at the local level by prioritizing fair pay and benefits packages. We ask community advocates to partner with police departments in their youth and outreach programs, and reinforce the message that cops are good people who risk their lives to protect and serve. We ask departments and police associations to continue with their philanthropic efforts and share them on social media, and maintain productive relationships with traditional media. We ask parents to teach their children to act respectfully toward officers and, finally, we ask officers themselves to assist with recruitment efforts by emphasizing the best aspects of the job and encouraging others to join them in an honorable career.”