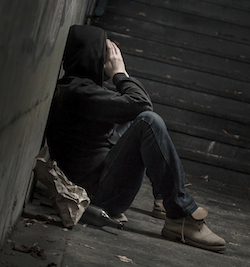 Last November, data released by the U.S. Housing and Urban Development Department showed that Los Angeles County has the highest population of chronically homeless in the entire country, with a disturbing increase of 55% from 2013 to 2015. About 70% of L.A.’s homeless are unsheltered versus sheltered individuals, translating to over 12,500 people living on the city streets and 44,300 countywide. With about 30% of the nation’s chronically homeless experiencing mental illness and about 66% suffering from substance abuse and health conditions — and bureaucracy, program gaps and personal instability making it difficult for this population to receive comprehensive, ongoing care — it’s a societal and public health problem that has unfortunately become law enforcement’s responsibility. As shown by rare, but increasing, violent interactions between the mentally ill and police, the city’s growing homelessness problem cannot be ignored any longer.

An LAPD report released on March 1 revealed that 37% of all L.A. police shootings last year involved subjects with mental illness, and increased from five mentally ill persons shot in 2014 to 14 in 2015. One of the incidents, which caused a social media storm and a lot of bad publicity for the LAPD, was the shooting death of a homeless man on skid row in downtown Los Angeles. Officers said the man was shot after he grabbed an officer’s holstered gun when they tried to take him into custody on suspicion of robbery.

“The combination of mental illness and drug abuse on skid row leads to multiple violent confrontations, and it appeared to have an impact on this confrontation,” said Chief Charlie Beck about the incident. “It is a tragedy, and one of the things that makes addressing homelessness in Los Angeles so important.”

Recently LAXPD officers have seen an influx of homeless and mentally ill at airport facilities, with some of the individuals acting aggressively. “We had two assaults on our officers within a couple of days at the end of February,” says LAAPOA President Marshall McClain. “In one case a police sergeant was struck in the face hard enough to break his glasses. In the other case, the suspect grabbed at the officer’s gun and attempted to remove it from the holster before being taken into custody.” When officers searched the suspect, they found a knife hidden inside her bra and a replica handgun, meat cleaver and 6-inch pipe in her purse.

“In December, a mentally ill man was walking on a restricted service road within the airport property,” continues McClain. “The depth of the problem is evident, and we are very concerned about safety of our officers, the public and these individuals alike. They pose a risk to themselves and others by being in our airport environment.”

City leaders are committing resources to address the issue, and are looking at holistic programs that first provide the homeless with housing and “wraparound” supportive services in mental and physical health, substance abuse, education and employment, which have proven successful in other regions. In September 2015, Mayor Eric Garcetti and the City Council proposed spending $100 million in 2016 to expand services to the homeless, including extending the hours when shelters are open and providing more rent subsidies to people on the streets and in shelters. With so many people in need, the mayor and council are also considering a bond or tax on the November ballot to generate more funds and provide more resources.

McClain supports the City’s efforts to alleviate homelessness. While he points out that LAXPD officers are highly trained in dealing with the mentally ill, he would like those living on the streets to have access to care and shelter, and points out that reducing their encounters with police may help to prevent future tragedies on all sides. “This issue hits very close to home for LAXPD officers,” concludes McClain. “We are getting ready to commemorate 11 years since Officer Tommy Scott was killed in the line of duty by William Sadowski, a bipolar homeless man who was off his medication at the time of the incident. I can’t help but wonder whether Tommy might still be with us if a more integrated range of services had been available to Sadowski.”