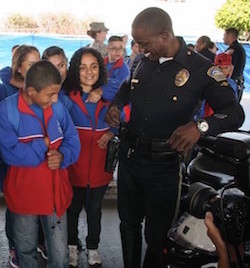 In the ongoing media coverage about the breakdown between police and the community, an important fact is repeatedly missed: The reality is that officers are not independent of society. They are – and have always been – not only participants but leaders in the areas where they live and serve. Peace officers’ charitable efforts have made a positive difference in countless lives, and there are far more examples of cops quietly serving as role models and contributing to their communities over the course of an entire career than there are of the isolated incidents of violence that have taken over the airwaves and social media in the past couple of years.

“Due to the nature of being first responders and interacting with citizens while out on patrol, police officers are keenly aware of those in need and want to connect them with available resources,” says LAAPOA President Marshall McClain. “But beyond that, their willingness to lead the charge means that officers have a long history of philanthropic activities. Show me one department in the country that doesn’t organize an annual holiday food and toy drive or host charity fundraisers throughout the year, or where officers aren’t the first to volunteer to get drenched with ice water or shave their heads for donations.”

Officers’ direct outreach to youth is particularly noteworthy. From the DARE program designed to prevent drug abuse to Cadet and Explorer programs that prepare teenagers for law enforcement careers, police departments have invested heavily in helping kids achieve their potential. For decades, mentoring by caring cops in their neighborhoods has helped young people develop into productive, responsible citizens and decreased juvenile crime and violence. Intervention programs and activities leagues across the country have paired children lacking resources or strong guidance at home with law enforcement professionals who facilitate sports, recreational and educational opportunities.

In response to the national dialogue sparked by controversial police actions in Ferguson, New York, Baltimore and elsewhere, last May the President’s Task Force on 21st Century Policing published its final report, with an entire section dedicated to community policing. The community policing model has long been the foundation of the LAXPD’s effectiveness in providing outstanding public safety services to the airport’s stakeholders, traveling public and surrounding area businesses. Implementing community policing principles in more departments will help move the law enforcement profession and its public relations forward.

But first it’s time for an overall change in the national conversation, starting with how officers are important contributors to the health and well-being of their cities, counties, states and the entire country through their heroic work and volunteer efforts. LAXPD officers are in a unique position to dispel negative views of law enforcement with visitors from around the world! While you perform your duties of protecting the public, utilize and build upon the strong relationships you have already forged with those you serve. By continuing to work strategically with our community partners, we can steadily put the focus back on the good deeds performed by the police every day.