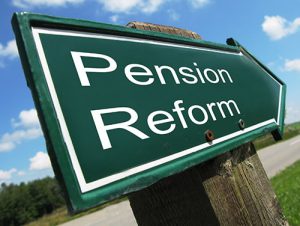 On January 18, former San Diego City Councilman Carl DeMaio and former San Jose Mayor Chuck Reed announced their decision not to go forward this year with either of their statewide ballot initiatives attacking public employee pensions. This sounds like great news for labor unions — and indeed, the fact that these poorly written, extreme and destructive measures failed to inspire donors to cough up the $3 million needed to gather qualifying signatures, let alone the $25 million that would then be required to wage a campaign, is a promising sign. But rather than giving up on their obsessive quest to privatize pensions, Reed and DeMaio plan to simply delay it until 2018, when they believe conditions will be more favorable.

Our earlier summary of this ongoing saga analyzed Reed and DeMaio’s Voter Empowerment Act, which would require voter approval of any changes to public employee pensions or benefits, and would eliminate defined-benefit plans for new employees. They then introduced a second measure, the Government Pension Cap Act, aimed at limiting what the government can pay for new employees’ retirement benefits to a certain percentage of salary. Once the attorney general issued titles and summaries, Reed and DeMaio polled voters on both measures and planned to move ahead with whichever one had at least 60% support — but it appears that neither one met the criteria. “Although our polling today shows continued strong public support for pension reform,” they claimed in an email to supporters, “we believe 2018 will provide an even better environment for substantial reform as rising retirement costs further squeeze their schools’ and local agencies’ budgets.”

Although Reed and DeMaio may be overestimating the support for their efforts to demolish retirement security for millions of California’s public servants, they may not be entirely mistaken about the future political landscape. 2018 is a nonpresidential election year, in which voter turnouts tend to be smaller and more conservative. Reed and DeMaio are also banking on the stock market continuing its current instability, which could increase resentment of government pension programs among workers who sustain losses to their own 401(k)s. The most ominous change on the horizon is the fallout from Friedrichs v. California Teachers Association, a Supreme Court case challenging mandatory union dues. Under current state law in California and 20 other states, public employees who choose not to join an established union must pay a “fair-share” or “agency” fee for collective bargaining and lobbying. Many legal experts predict that the Supreme Court’s decision — expected in June — will strike down this requirement, dealing a major blow to union revenues. While law enforcement unions are less likely to see an exodus of dues-paying members because they offer other crucial benefits such as legal representation, an anti-labor ruling in Friedrichs has the potential to weaken the broader coalition’s membership and resources by the time the next phase of the pension fight rolls around.

That’s why it’s crucial for all public employees to remain vigilant. “LAAPOA urges its members, and our allies in the law enforcement community, to stay alert and informed about pension issues, and to spread the word to their family, friends and neighbors,” says President Marshall McClain. “While we are pleased that Reed and DeMaio have failed yet again in their efforts to bypass the courts and override collective bargaining to destroy the benefits we have worked so hard to achieve, the threat is not over. Now is the time for us to unite, educate the public and prepare to defend against the next round of attacks, whenever they may come.”