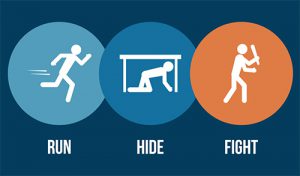 As we have unfortunately seen in previous incidents at LAX and the recent spate of violent events both close to home and abroad, encountering an active-shooter scenario, while unlikely, is still not out of the realm of possibility for any of us during our daily activities. Because active shooters seek to take as many lives as they can in as short a period as possible — before law enforcement arrives — it’s important to know what to do in case the worst happens. As part of our ongoing duty to protect our community, LAAPOA asks that you review and share the following information with your family, friends and colleagues.

Be mentally prepared and plan to act in an emergency. The first steps in dealing with an active-shooter situation are knowing that you will have to act and having a plan in place. In its 2013 study of active-shooter incidents between the years 2000 and 2013, the FBI reported that 70% of them ended in five minutes or less, and that “civilians often had to make life-and-death decisions.”

When you are at work or in a public place, look around you. Think about where you would go and what you would do if a shooter appeared. Take note of the nearest exits in any facility you visit so that you know your escape route beforehand. Also look for hiding places and scout out possible weapons in case you have to fight.

Maintain situation awareness. As you are going about your day-to-day business, be on the lookout for anything unusual, including sounds and smells, that might indicate danger. If you notice something that doesn’t seem right, be ready to act, as follows.

If you hear shots, immediately run away from the shooter to one of your preplanned escape routes and leave the facility. Don’t stop for your belongings. While running, keep your hands visible in case police are responding. Once you are safe, call 9-1-1. Keep others from entering the building.

If escape is not an option, hide in an area out of the shooter’s view. Lock yourself in a room, such as an office, closet or bathroom, and barricade the doors. If you can’t hide yourself in a room, try to find a location that provides you cover but also allows you to see the shooter so that you can make a run for it if possible. Silence your phone and stay quiet. Or, if you feel that you safely can, dial 9-1-1 to alert authorities to the situation.

If running and hiding have failed and your life is in imminent danger, the last option is to fight in an attempt to incapacitate the shooter. If you can enlist others, fight as a team. (The more people you have, the better your chances will be.) Act aggressively. Distract the shooter by throwing anything that could hurt them, and attempt to get the gun away from them.

Remember that the worst thing you can do when faced with an active-shooter situation is nothing. By knowing what to do before it happens, you’re in a better position to save yourself and others.

There are many online resources to help you prepare for this worst-case scenario. Downloadable “How to Respond” materials, including pocket cards in English and Spanish, as well as information on active-shooter preparedness training, online courses and webinars, are available from the Department of Homeland Security. For additional reading, see “What to Do in an Active-Shooter Situation.”

It is LAAPOA’s fervent hope that you will never need to utilize these survival tips. Stay safe.