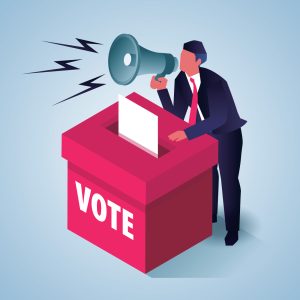 In LAAPOA’s last e-newsletter, we sounded the alarm on the extreme voter apathy demonstrated by the low turnout seen in Los Angeles and statewide during the June primary election. While the numbers rose slightly from initial reports as more mail-in ballots were counted, by July 6 it was clear that fewer than one-third of California voters — and even a few percent less than that in L.A. County — had participated. Pundits offered plenty of theories about why voters feel disengaged, but instead of the reasons, let’s focus on the results. For peace officers, the dangers of not being involved in the political process are real, and can even be life-or-death. The deteriorating condition of public safety in our state shows what can happen when uninformed politicians, special interests and a vocal minority try to dictate the terms of law enforcement. We have an opportunity to turn back the tide, but every single one of us needs to stand up for the safety of our profession and our communities by making our voices heard through the power of voting.

Recent history vividly illustrates the repercussions of electing leaders who lack understanding of the realities of law enforcement. California’s criminal justice system has been dramatically altered for the worse over the past decade or so by sweeping measures like AB 109 (2011), Prop 47 (2014) and Prop 57 (2016), which contributed to our current chaos by shifting lower-level offenders from prisons to jails, weakening the parole and probation system, and downgrading felonies to misdemeanors — resulting in the release of tens of thousands of inmates and making it infinitely more difficult to hold criminals accountable. These issues were exacerbated by the “defund the police” movement that swept the nation in 2020, inspiring civic leaders and lawmakers to push knee-jerk “reform” proposals that slashed policing budgets, downsized departments and restricted officers’ ability to do their jobs while contributing to a lingering attitude of hostility and lawlessness. And then there’s the latest wave of progressive elected officials like L.A. District Attorney George Gascón, whose controversial policies — such as preventing prosecutors in the DA’s Office from seeking the death penalty, sentencing enhancements or cash bail in nonviolent cases — have further emboldened wrongdoers.

Unsurprisingly to anyone with experience in public safety, reckless and reactionary political decisions like these have created a revolving door for criminals and made our state and cities less safe. Throughout the past year, many communities have seen an extraordinary number of violent, brazen crimes, such as organized retail theft, follow-home robberies, auto theft, assaults and fatal shootings. The city of Los Angeles had nearly 400 homicides in 2021 — the most in a single year over the last 15 years — as well as an influx of gun violence and increases in violent crime and property crime.

Recidivism is rampant, with repeat offenders frequently making headlines for their escalating crimes. A San Diego County supervisor recently wrote a letter to a judge asking for the maximum sentence for a felon who’s been arrested 10 times in the past two years, seven times in 2020 alone. Convicted in 2018 of being a felon in possession of a firearm, the man had an active felony warrant for violating probation when he was caught on May 7 with a “ghost gun,” magazines and evidence of drug dealing, including more than 230 fentanyl pills. And the city of El Monte recently suffered the tragic results of a similar cycle when a felon on probation shot and killed Police Corporal Michael Paredes and Officer Joseph Santana. The killer had previously been convicted of burglary in 2011, normally considered a strike under California’s “three strikes” law. That should have meant he faced more prison time when he was charged as a felon in possession of a firearm in 2020, but a special directive by the newly elected Gascón prohibited prosecutors from filing strike allegations, a policy later declared illegal by a superior court judge. Under normal sentencing guidelines, the killer could still have been in prison, instead of being at liberty to murder two law enforcement officers.

As more communities feel the perilous effects of these failed political and policy decisions, there are signs the tide is turning. Municipalities that previously defunded police are restoring or even increasing funding to combat rising crime, and efforts to recall progressive prosecutors are gaining momentum. But elections are a major way that policymakers take the temperature of the citizens, which means tepid turnout numbers make it hard to draw conclusions. Even recent victories for public safety like the successful recall of Chesa Boudin in San Francisco haven’t reflected a clear, decisive mandate because they were made by a minority of voters. As the November election approaches, it’s vital to mobilize and send a clear, decisive message that the majority of Californians demand leadership that won’t sacrifice the safety of our communities to abstract philosophies or political pressure.

“Over and over again, we have seen the majority of our legislators pass counterproductive laws with misleading titles that obscure what the bill actually does, wreaking havoc on our system,” LAAPOA President Marshall McClain says. “How can we talk about alternatives to incarceration when those who are released from prison simply continue the cycle of recidivism? How can we talk about toughening gun laws when our politicians don’t want to enforce the gun laws already on the books and are reducing penalties when a gun is used in the commission of a crime? And yet, meanwhile, the Legislature has made it more difficult for specialized police officers to purchase handguns. How many Californians would say these are the results they wanted when they filled out their ballots, or when they decided to sit out an election or two? Our current predicament reveals the crucial importance of being informed and involved citizens.”

LAAPOA and our partners at PORAC will remain vigilant in speaking out for public safety and advocating in Sacramento and Washington, D.C., to try to prevent the passage of damaging bills. But the best defense is to stop these flawed policies before they start by electing candidates who are committed to addressing rising crime, holding criminals accountable, honoring victims’ rights and supporting law enforcement. We’ve seen that every race on the ballot matters, from the local city council to the highest offices. With the safety of our communities and the future of our profession on the line, we urge you to please pay attention and stay engaged in the runup to November, educate and organize your families and neighbors, and vote in resounding numbers. We know there is a vacuum in political participation in our society — so let’s be the ones who fill it with our involvement and action to achieve the change our communities need.