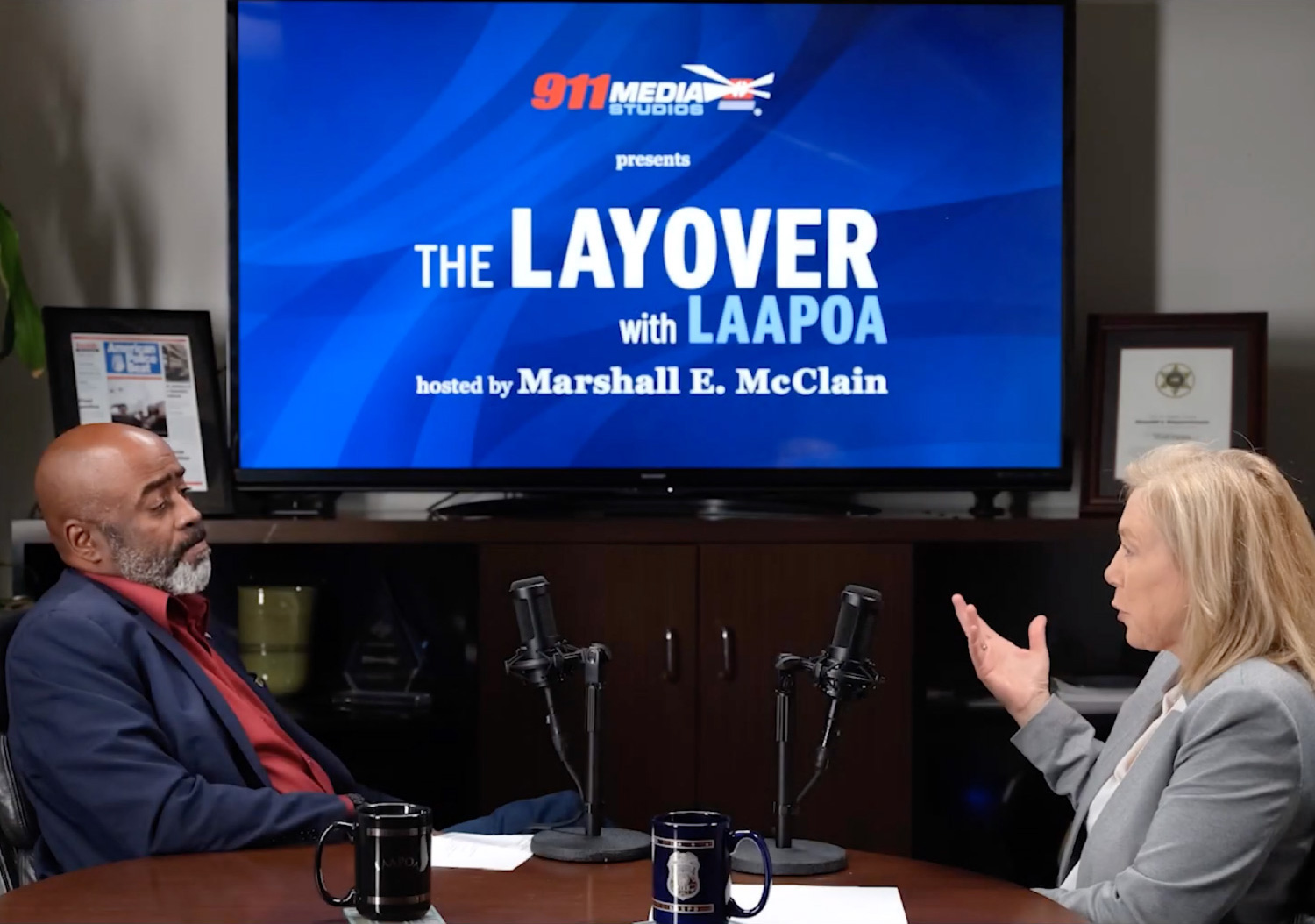 In the newest episode of The Layover With LAAPOA video podcast, LAAPOA President Marshall McClain sits down with Sacramento District Attorney Anne Marie Schubert, who is currently running for California attorney general in the 2022 election.

Schubert is a career prosecutor with 31 years of experience in working with law enforcement. In her decades of work with the Sacramento County District Attorney’s Office — first as a supervising deputy district attorney and then as district attorney following her election in 2014 — she has become internationally recognized for her successful prosecutions of some of California’s most notorious criminals, including the Second Story Rapist and the Golden State Killer. Particularly passionate about the pursuit of justice through DNA evidence and cold case prosecution, she formed the Cold Case Prosecution Unit in 2002 and served as its first prosecutor, and today her office works to train and assist law enforcement agencies across the country in the use of DNA and investigative genetic genealogy (IGG) to solve violent crime. As a candidate for state attorney general, Schubert has pledged to tackle rising crime by aggressively prosecuting violent criminals, taking illegal guns off the streets and combating the drug epidemic. Her commitment to upholding law and order has earned her the support of many law enforcement groups, including LAAPOA and our partners at PORAC.

Tune in to learn more about Schubert, her background, her prosecutorial career, her values and much more. The interview can be viewed here.

Here are a few highlights from the episode:

Schubert grew up in the Sacramento area as the second-youngest of seven siblings, and says her parents taught her “the value of passion, persistence and education.” In particular, she movingly remembers the lessons imparted by her mother, Greta: “My mom was the kind of person that was a fixer, and I like to consider myself that… She taught me the value of doing things yourself sometimes … not being afraid to do things on your own.” From changing the oil in the family car to building 8-year-old Anne a bicycle and sewing outfits for her to wear in horseback-riding shows, “she was very industrious.” Tragically, Greta was diagnosed with breast cancer when Anne was 12 and passed away when she was 16, but her daughter carries on her legacy in many ways, including her love of DIY home improvements and her dedication to hard work in her career.

“I went to law school for the wrong reasons,” Schubert answers bluntly when asked how she chose her career. “I thought, there’s two routes to be successful in life: You can be a doctor or a lawyer. My dad was a doctor, but I didn’t like blood … so I thought, ‘OK, I’ll just go to law school and hopefully I’ll have a decent job when I get out.’” But when she interned for a judge named Lucy McCabe as a law student and experienced her first exposure to criminal law, she says she “was bit by the public safety bug” and knew she wanted to be a prosecutor.

The Need for Change

When asked what she would do if she could alter an existing law or implement a new one, Schubert doesn’t hesitate: “I would change Prop 47.” Passed by California voters in 2014, the measure reduced theft and drug crimes to straight misdemeanors, no matter whether it’s the first offense or the 50th. “In my opinion it’s caused a lot of the chaos we’re seeing in our system,” she says. “I think it’s driven homelessness, I think it’s driven drug addiction, I think it’s driven mental health issues that we see on the streets of our communities.” Schubert did attempt to change Prop 47 by working with Assemblymember Jim Cooper to introduce Proposition 20, which would have added more crimes to the list of nonviolent felonies for which early parole is restricted and required DNA collection for certain misdemeanors, but the initiative was defeated in the 2020 election.

Much like law enforcement, Schubert says her career field is too often subject to misconceptions: “People label you without knowing who you are… I’m a prosecutor. That doesn’t mean I’m not a human being. It doesn’t mean that I think everybody should be in prison. I actually believe very much in things like rehabilitation, compassion and all that.”

In her personal life, Schubert’s proudest accomplishments include parenting her two sons and achieving in her goal of running the Boston Marathon. Professionally, she points to two cases that she says “are the bookends of the work that I’ve done” as a prosecutor and forensic DNA expert. “The Golden State Killer is right there at the top of the list,” she says, alluding to the successful investigation, arrest and conviction of the man who committed at least 13 murders and 50 rapes across California over the course of decades, and who was finally identified through the use of genetic genealogy. But equally important, she says, was her office’s work with the Innocence Project to use the same type of DNA tools to exonerate a man named Ricky Davis, who had been imprisoned in another county for 15 years for a crime he didn’t commit. “DNA is the greatest tool ever to find the truth, no matter where it leads us,” she says.

Above all, Schubert says she prides herself on the innovative work she’s done throughout her career and the way she’s lived out her parents’ values of passion and persistence. Asked what she’d like her legacy to be, she declares she hopes to be remembered as “a person that was in it for the right reasons. That she pursued public safety and good public policy, that she knew how to try a case, that she was really good at it, that she treated people in the system with complete fairness and dignity and respect.”