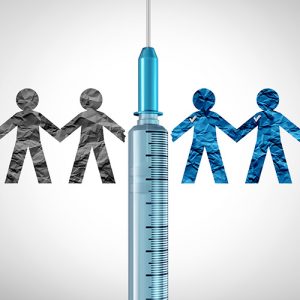 As vaccine mandates roll out for public employees nationwide, police and the unions that represent them have vehemently pushed back. Law enforcement groups in Los Angeles, Chicago, New York, Baltimore and other major cities have filed lawsuits to contest local ordinances, alleging, among other things, that requiring full inoculation violates workers’ rights and is unconstitutional. Amid these battles, a popular narrative has emerged among some unions, police leaders and politicians that suggests that the mandates are politically motivated and serve as another way to continue the “defund the police” movement that gained momentum following the killing of George Floyd in 2020. Here, we unpack that assertion and focus on how the mandates are affecting law enforcement locally and in other parts of the country.

Last month, vaccine mandates for L.A. County and the City of L.A. went into effect. All County employees, regardless of department, were required to be fully vaccinated and register their vaccination status by October 1 on an online portal, barring religious or medical exceptions, per an executive order ratified by the Board of Supervisors in August. Similarly, City employees, under an ordinance passed by the City Council in August, were required to be fully vaccinated and show proof of full inoculation by October 13. Unvaccinated City employees must submit to and pay for twice-weekly COVID-19 testing unless they are granted a medical or religious exemption. County or City employees who do not comply with these mandates could be subject to discipline, suspension without pay or termination.

Many public employees have filed lawsuits opposing these mandates, including police officers and firefighters, who allege that the policies violate employees’ due process, constitutional privacy rights and more. And most recently, the Los Angeles Police Protective League (LAPPL), the union representing Los Angeles police officers, filed a lawsuit against the City’s mandate, “alleging the city negotiated the terms of the policy in bad faith and is inappropriately trying to pass on associated costs to officers,” the Los Angeles Times reports. LAPPL added that the City’s requirement to have unvaccinated employees pay for their testing ($65 weekly) when that testing is a condition of their work duties is a violation of labor law.

While many officers have been fighting these mandates, some have decided to resign rather than comply. This has left already short-staffed departments scrambling to fill vacancies and has forced officers and staff to work unprecedented overtime hours to serve the needs of their communities. This response is what prompted L.A. County Sheriff Alex Villanueva’s decision not to enforce the County mandate for his deputies. In an open letter to the Board of Supervisors, the sheriff warned of an “imminent threat to public safety” caused by a “mass exodus” of employees refusing to receive the vaccine. “I could potentially lose 44% of my workforce in one day,” he wrote. “I cannot enforce reckless mandates that put the public’s safety at risk.” On social media, Villanueva went on to say that the department can expect a rise in unscheduled retirements, workers’ compensation claims, employees quitting and a reduction in qualified applicants. He added that homicide rates would continue to rise as response times increase and patrol services decline.

In his letter, the sheriff also stated (emphasis added): “The Los Angeles County Sheriff’s Department has already been ‘defunded’ by over one thousand positions. The Board of Supervisors is the only board in the entire nation that has continued with last year’s defund law enforcement movement. Every other board in the nation has restored funding to their law enforcement agencies. … Despite the substantial loss of personnel, increase in workload, and rise in crime, I have been provided no additional resources by the Board, and you continue to defund my department …”

In this statement, Villanueva draws a correlation between vaccine mandates and defunding (as well as defunding and rising crime), which mirrors similar claims made by others critical of such policies. For example, former Detroit Police Chief James Craig recently told Fox News that vaccine mandates were tantamount to defunding in a discussion about Seattle losing a significant chunk of its police force days after its vaccine policy went into effect. (This is in addition to the more than 300 officers that the city has lost over the past year.) He also said that people in vulnerable communities would be the most impacted by the mandates, as fewer officers would be available to respond to calls or regularly patrol neighborhoods.

Also, the San Francisco Police Officers Association argued in a statement that the city’s mandate appeased criminal justice reformers, like San Francisco’s district attorney: “This is nothing more than defunding the police masquerading as a vaccine mandate, the only people this makes happy are criminal enablers such as Chesa Boudin.”

And Representative Steve Scalise (R-La.) recently suggested to reporters that vaccine mandates are part of a political strategy to defund the police. “When you look at some of the states where they know they want to defund the police, but they also know the public is against defunding the police. They know that if they put a vaccine mandate in place, about 20% or more of the police officers and firefighters will ultimately get fired because they’re not vaccinated,” he said.

Why is this correlation being made? A popular argument in the defunding movement is that fewer police officers on the street could actually reduce crime because the funding and resources used for public safety could instead be invested into underserved communities, namely to support social welfare programs. Thus, officers who oppose the mandates will likely be given no other recourse than to leave the profession, saving their municipalities the cost of their salaries. Whether the decision makers supporting vaccination mandates are intentionally attempting to defund police or whether it’s an inadvertent side effect, the result is the same: reducing the ranks and further crippling the profession.

As Villanueva and others have pointed out, mandates are making a bad situation even worse, since law enforcement had already been experiencing staffing shortages before the pandemic. According to the National Police Foundation, 86% of law enforcement agencies nationwide reported a staffing shortage last year. Legal challenges to and refusals to enforce vaccine mandates aim to keep that percentage from increasing, but time will tell what lasting impacts these policies will have on the profession and whether officer attrition will help reinvigorate the defunding movement.

“The employment crisis coupled with rising crime rates nationwide gives credence to warnings that vaccine mandates pose an ‘imminent threat to public safety,’” LAAPOA President Marshall McClain says. “Fewer officers on the street may be a ‘win’ for police defunders, but as many have pointed out, what about the safety of our communities?

“While based on conjecture, there are certainly connections or parallels that can be made between vaccine mandates and defunding,” McClain continues. “As we have seen, many cities backtracked on earlier reactive moves that slashed police budgets due to high crime during the pandemic, effectively sidelining the ‘defund the police’ agenda. Forcing officers to get the vaccine against their will — literally forcing them to resign from their profession — is certainly one way to achieve defunding, a movement that few people actually support.”

At this writing, LAAPOA has filed an unfair labor practice charge with the City on the basis of refusing to abide by the Meyers-Milias-Brown Act (MMBA), which requires the City to bargain in good faith the impacts of the vaccine mandates. McClain says the City is retaliating against LAAPOA members punitively for choosing to file medical and/or religious exemptions.

“The City of Los Angeles received over $1 billion in COVID relief. COVID testing is offered for free throughout the County of Los Angeles and City of L.A., yet the City won’t allow any employees the ability to use these services, instead requiring any employee who has filed an exemption to pay twice weekly for testing,” McClain says. “To even further the point, the City is requiring employees who aren’t even at their worksites, either due to telecommuting or injuries sustained on duty, to still be tested twice a week. When asked how this is keeping other employees safe, we were told that it’s a matter of equity and treating unvaccinated employees the same regardless of their work status.”

LAAPOA will keep members apprised of updates regarding the unfair practice charge and the effects of vaccine mandates on public employees.