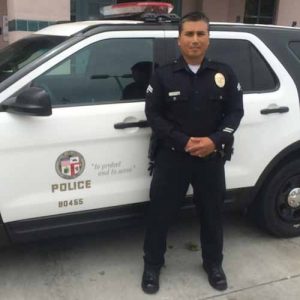 Like many who join the law enforcement profession, Officer Manuel Elorriaga said he wanted to help people and be someone who could make a difference for someone in need. Elorriaga’s motivation to serve others has remained steadfast throughout his almost 25 years of employment with the City of Los Angeles, including nearly 17 years as a police officer.

Elorriaga began his career with the City as a traffic officer with the Department of Transportation before becoming a police officer with the General Service Police Department (LAGSPD), a now defunct agency that provided police and security officer services to City Hall, the Convention Center, parks, recreational facilities and more. Elorriaga became a municipal police officer (MPO) when the LAGSPD was dissolved by the L.A. City Council and absorbed into the LAPD in 2012.

For those unsure where MPOs fit within the city’s policing services, Elorriaga offers some clarification. “An MPO is a former LAGSPD officer who did not complete a 1014 lateral transfer into the LAPD,” he explains. “As a result, those of us who didn’t complete the 1014 transfer were kept in our PC classification, but we complete all training and are kept to the same standards as any LAPD officer.”

Elorriaga started as a regular patrol officer for a few years before becoming a senior lead officer, something he says was one of the most rewarding moments in his career. He was then assigned to the West Bureau area of the city, which covers five LAPD divisions: Olympic, Wilshire, Hollywood, Pacific and West L.A. Elorriaga held that assignment for over 10 years before transferring into a sergeant-at-arms position (still a senior lead) for the L.A. City Council, a position he still holds today.

As a field senior lead, Elorriaga says his favorite parts of the job are building relationships and trust within the community. “I enjoy being able to talk to people, meeting with a wide variety of individuals who express their concerns and issues, and being able to create solutions for those issues or concerns,” he shares. “Sometimes all people want is an ear to listen, someone who will listen to their problems and make any type of effort to resolve them.”

But he admits that the job isn’t always easy. Among the difficulties Elorriaga encounters on duty is having to “arrest the same people over and over, with no real solution to stop the cycle,” he says, adding that many people who need help are not interested in the assistance offered to them.

In addition, Elorriaga says, “not having enough time and resources to do the job and resolve issues and problems and being pulled from every direction on a variety of problems by different people” make an already difficult job more difficult.

Despite these challenges, Elorriaga has risen to the occasion to help the community. Some of his most rewarding moments on the job include getting homeless individuals off the street with the help of various outreach agencies and helping find loved ones who had been reported as missing, especially senior alerts. And his proudest accomplishment, he says, was receiving a Medal of Life award for his heroic actions during the 2008 Sesnon fire in San Fernando Valley.

Elorriaga has experienced a lot and seen the profession change in the course of his career. While police are under increased scrutiny in today’s climate, he still encourages people who have the passion to serve to pursue careers in law enforcement. He offers this advice for prospective officers: “There are many outside influences that make the job a lot harder to do in order to be able to accomplish things,” he says. “These are influences that you have no control over, so the best thing to do is just do your job. Be as consistent as best you can. Don’t let those influences be a detriment to your future as a police officer, and find someone you can talk to.”

Finally, Elorriaga says that the anti-law-enforcement rhetoric shouldn’t define the men and women in blue who work hard to uphold the oath they took to protect and serve.

“I just wish people would not be so biased against the police; I wish they would not paint us with such a broad stroke,” he says. “A lot of police officers just want to help everyone as best they can, and they try to uphold the trust the public has placed in us. The police can and do change with the times. There is more training, more outreach and more transparency than before. I wish people would take the time to learn just what we do as police officers, not just what is said about the profession in the media.”