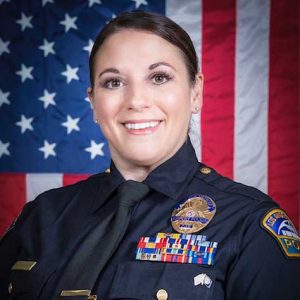 Whether it’s those in law enforcement or the armed forces, it takes a special individual to voluntarily put on a uniform and risk their life to protect the freedoms and rights of others. PO II Shannon Weathersbee knows this very well. Before being sworn in with LAPD Academy Class 1-17 and joining the Los Angeles Airport Police in July 2017, Weathersbee was a Security Forces member with the Air National Guard for nearly two decades.

With about 19% of police officers also being military veterans, Weathersbee, who officially retired from the military in May 2020 after 22 years of service, joined others in making the natural transition to law enforcement. So far, her journey has been extremely fruitful. “The military has helped me tactically be ready for anything, and a lot of what I learned transferred over,” she explains. “Military police training is basically the same — some laws are different, but the tactics, rules of engagement and daily patrol duties are very similar, so having the military police training made it easier to transition to civilian police work. Also, the police academy is a paramilitary-type training, so it was like second nature attending the Academy.”

What made Weathersbee’s decision to join the force even easier was her family’s deep ties to the profession. “I’ve always wanted to be in law enforcement because my father and uncle were in law enforcement, and they inspired me,” she says. “Both were California officers; my father was a local P.D. patrolman and my uncle was with the Sheriff’s Department and retired as a detective.”

Asked why these figures had such an impact on her law enforcement career, Weathersbee’s answer was simple: “They had families and did all they could to be great law enforcement officers, and they made it a priority to be home and be great fathers and role models.”

Before becoming an officer, Weathersbee was also a competitive bodybuilder, even coming in first place at the 2016 NPC Iron Man Naturally Anaheim contest for her division. But the drastic lifestyle change from bodybuilder to police recruit came with some adjustments.

“When I went into the Academy, my whole life changed,” Weathersbee says. “I was not able to eat my regular meals during the day at my regular scheduled times or go to the gym as often due to being tired from the Academy and the lack of free time from studying and preparing uniforms and equipment for the next day’s training.”

However, Weathersbee’s experience in the fitness world helped her recognize how crucial it is for officers to stay healthy and in shape throughout their law enforcement careers.

“There should never be a question of, ‘Should I be physically fit?’ because if you aren’t, you risk injury and major health issues,” Weathersbee says. “Law enforcement can be an unhealthy lifestyle as it is, due to different schedule types, always being on the go and high stress, but being unfit will make it worse. Being in shape makes it easier to get up and go if needed, keeps you alert and makes physical contact, if needed, easier.”

Now a four-year LAXPD veteran, Weathersbee plans to keep growing in her role and continuing to be an invaluable asset to the Department and community. “Becoming one of the few women in law enforcement, saving someone’s life and helping family members locate lost loved ones are the proudest moments of my law enforcement career so far,” Weathersbee says. “The most rewarding part of my job is helping others in need. My ultimate goal is to become a drill or PT instructor at the Academy or be a part of LAXPD recruiting. I also aspire to become a detective one day.”