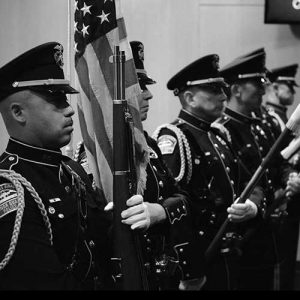 After a challenging 2020, LAAPOA is thrilled to be starting the new year on a high note — the Los Angeles Airport Police Department is celebrating its 75th anniversary! The agency has come a long way since 1946, when only six guards patrolled the fledgling municipal airport. As LAX grew over time, so, too, did the LAXPD. The agency is now recognized as the largest airport police agency in the United States. Over the past 75 years, hundreds of men and women have donned the LAXPD uniform and badge to ensure the safety of LAX and other city-owned airports and their surrounding communities. In honor of the LAXPD’s tremendous milestone, we are taking a trip down memory lane with a cursory look back at the agency’s history.

Humble Beginnings
The agency began serving the security needs of LAX in 1946, when the airport began commercial airline services after completing major construction of new runways, passenger terminals, hangars, a control tower and maintenance sheds. The City of Los Angeles hired six armed airport guards and one supervisor to serve as a physical presence to protect the expanded municipal airport. In 1949, the ranks grew to nine individuals, who during that same year were reclassified as “special officers” of the City. Under this classification, the officers worked for the Operations Bureau under the direction of the on-duty superintendent of operations.

A decade later, the organization, now known as the Security Division of the Operations Bureau, grew to 12 officers and was led by its first chief of security, George Dorian. In 1961, with the opening of the new, expanded Jet Age airport — which included new terminals, a new control tower and the iconic Theme Building — a detachment of LAPD officers was permanently assigned to patrol and protect the airport alongside the special officers.

In 1968, the California Legislature granted peace officer status to the special officers of the Department of Airports. In 1973, approximately 70 officers and sergeants were assigned to the airport, and 30 unarmed, non-sworn security officers were hired to staff airfield access control posts. That same year, a separate organization of peace officers called the Boarding Services Bureau was established to specifically handle aircraft hijacking concerns. This group was composed of 75 members, including a director, a lieutenant and five sergeants.

The Security Division and the Boarding Services Bureau eventually merged in 1981 to become the Airport Security Bureau. Three years later, in 1984, the Airport Security Bureau was renamed the Los Angeles Airport Police. That same year, Tom Bradley International Terminal opened in conjunction with the 1984 Summer Olympic Games in Los Angeles. At this time, the LAXPD’s staffing increased substantially to handle the influx of travelers flying to Los Angeles.

In 2004, the City Personnel Department officially changed the job classification from “Special Officer” to “Airport Police Officer.” And in 2013, the passage of AB 128 reclassified airport officers under California Penal Code 830.1, upgrading them to the same status as the LAPD and other municipal police departments in the state. The change expanded airport police authority, allowing them to provide enhanced service to the traveling public and increasing the efficiency of local law enforcement.

Largest Airport Police Agency in the U.S.
Today, the LAXPD is recognized as the largest airport law enforcement agency in the nation, dedicated to patrolling the second-busiest airport in the country and the fourth-busiest in the world 24 hours a day, seven days a week. In Los Angeles County, the LAXPD is the fourth-largest agency, with more than 1,200 law enforcement, security and staff personnel serving LAX and Van Nuys Airport. The agency has grown to include numerous specialized units, such as K-9, Motorcycle Patrol and Dignitary Protection, and has representatives assigned to the Los Angeles Joint Terrorism Task Force and Los Angeles County Terrorism Early Warning Group.

During its 75 years of service, the LAXPD has continuously grown and adapted with technological advances in airport security in order to protect the public from both foreign and domestic threats, especially after the September 11 terrorist attacks and the November 1, 2013, incident at LAX in which a shooter terrorized travelers and employees and fatally shot TSA agent Gerardo Hernandez. As such, the LAXPD’s responsibilities have also grown immensely. Officers are called upon to deal with everything from shootings and bomb threats to traffic enforcement and assisting travelers and the public.

Despite all the critical incidents and events that the LAXPD has responded to over the years, the agency is fortunate to have lost only one officer in the line of duty: Tommy Scott. He was killed at the age of 35 on April 29, 2005, while heroically protecting the aviation community from a man intent on crashing a vehicle into an airplane on an LAX runway. It was the first line-of-duty death in the department’s 59-year history.

Looking Ahead
This year, the agency hopes to open the doors to its new state-of-the-art policing headquarters. The new facility, which will consolidate all policing operations into one centralized location, will provide a professional and technologically advanced environment to support the efforts of the LAXPD to safeguard the aviation community and the surrounding neighborhoods.

“LAAPOA congratulates the LAXPD on reaching this incredible milestone and offers its immense gratitude to the brave men and women, past and present, who have worked tirelessly to protect our airports for the past 75 years,” LAAPOA President Marshall McClain says. “We are proud to have played a part in raising the bar and helping this great agency grow and thrive by representing, supporting and empowering our members and ensuring that they not only have the best benefits, training and equipment available, but also the respect of LAWA management and the communities we serve. We look forward to working alongside the LAXPD, LAWA and the City as we continue serving our members, the public and our law enforcement community for years to come — here’s to the next 75 years!”