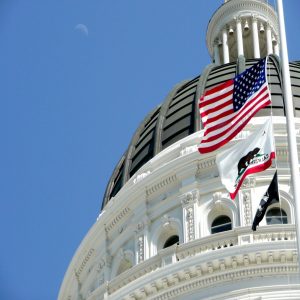 The nationwide protests, rallies and marches that have taken place since the killing of George Floyd have put police reform at the forefront of people’s minds and given way to intense debates in federal and state legislatures over measures aimed at tackling an array of issues in the law enforcement profession.

In California, many lawmakers seized the moment, introducing more than two dozen reform proposals focused on use of force, oversight, accountability and other policing issues during the last few months of a short and stressful legislative session impacted by COVID-19. The impassioned debates over these bills involved everyone from lawmakers and police unions to civil liberties groups, celebrities and the general public and ran well into the last days of the session, which culminated on August 31.

“Fortunately, thanks to the efforts of police unions throughout the state, the end of the session resulted in only a handful of reform legislation reaching the governor’s desk,” LAAPOA President Marshall McClain says. “It was clear from the beginning that many of these bills were written hastily, with bad language and without input from law enforcement leaders. That’s not what we need to meaningfully addresses reform.”

LAAPOA, along with our statewide partner PORAC, voiced our concerns about many of the measures from the moment of their introduction, as they included language that would negatively impact public safety and dramatically affect how peace officers do their jobs. One such bill PORAC and other unions zeroed in on was SB 731 by Senator Steven Bradford (D-Gardena). The measure, which was among the group of bills that failed on the last day of session, would have eliminated qualified immunity and created a process for officers to be stripped of their badges if they are convicted of certain crimes or fired for misconduct.

While many law enforcement groups agree that there should be a way to prevent “bad” officers from moving from department to department, one of the main issues with SB 731 was how a proposed nine-member disciplinary panel reviewing officer misconduct would be composed. According to the bill, the panel would include six members who have backgrounds opposing police misconduct and three members representing law enforcement. In a joint press release sent out days before the end of the session, PORAC, the California Police Chiefs Association (Cal Chiefs) and the California Association of Highway Patrolmen (CAHP) expressed their concern that the majority of the panel would be members “whose qualifications are inherently based on negative encounters with peace officers,” and took issue with the fact that a biased board would have “complete investigatory authority to overturn local agency and District Attorney recommendations and discipline.”

According to reporting from the Associated Press, Bradford was unwilling to compromise with law enforcement organizations that offered alternative wording for the bill, or with the governor’s office, which offered proposed amendments. This lack of collaboration, some law enforcement leaders say, is what ultimately led to the measure’s demise. “When you’re changing a profession, and you don’t talk to the people it’s actually affecting, I think good leaders stand up and say that’s probably not a fair process,” PORAC President Brian Marvel told reporters.

Other knee-jerk reform proposals that failed alongside SB 731 were SB 776 by Senator Nancy Skinner (D-Berkeley), which called to open more police personnel records to the public; AB 66 by Assemblymember Lorena Gonzales (D-San Diego), which would have banned the use of rubber bullets and tear gas on protesters; and AB 1022 by Assemblymember Chris Holden (D-Pasadena), which would have required officers to intervene if they witness excessive use of force.

Like SB 731, these bills offer haphazard solutions to issues that many in the law enforcement profession would like to see reformed in some way. Police unions argue that they require more research and vetting, and the way they are currently written is problematic. In a recent interview, Cal Chiefs President Eric Nuñez told Capitol Public Radio, “A lot of these bills, we actually support in concept, the problem is that the devil is in the details.” He cited how SB 776 would cost departments and cities millions in recordkeeping for decades of misconduct complaints. Nuñez also pointed to last year’s landmark use-of-force training legislation, SB 230, which was crafted with heavy input from law enforcement, as an example of what could happen if law enforcement and legislators worked together on reform.

As Marvel stated to lawmakers in the joint press release: “Tell us what you want from law enforcement, and then let’s work together to find common ground that keeps our communities and peace officers safe. We’re here to serve you.”

“SB 731 and other reform bills provide us with perfect examples of why we need balance in our Legislature,” McClain says. “Not having balance results in the creation of unbalanced legislation, and voters, for the most part, don’t get to weigh in on these flawed laws.

“When it comes to drafting such legislation, language is everything, and we have the ability to provide input on the way legislation is written if we speak up,” McClain continues. “I think this is an opportune time for law enforcement members to brush up on our legislative process and see how they can effect change in the legislative matters that affect them and their livelihoods. This rush to reform our profession will no doubt be ongoing, so it’s imperative to be politically engaged. Contact your legislators and provide testimony for or against bills — make sure your voice is heard.”

Among proposals that passed through both houses were AB 1506 by Assemblymember Kevin McCarty (D-Sacramento), which would require state-led investigations (by the state attorney general or another state prosecutor) into officer-involved shootings resulting in the death of unarmed individuals; AB 1185, also by McCarty, which would allow counties to create sheriff’s review boards; AB 1196 by Assemblymember Mike Gipson (D-Carson), which would ban the use of the carotid restraint; and AB 1299 by Assemblymember Rudy Salas (D-Bakersfield), which would make it difficult for departments to hire officers who have a history of serious misconduct.

While all of the police reform legislation was happening, a contentious bill, SB 145 by Senator Scott Wiener (D-San Francisco), was passed by both houses and subsequently signed into law by the governor on September 2. This new law amends Sections 290 and 290.006 of the Penal Code, relating to sex offenders, overturning a previous 2015 California Supreme Court ruling that reinstated a 1947 California law that had been previously reversed by a 2006 state Supreme Court ruling that said the 1947 law was discriminatory. It exempts from mandatory registration under the act a person convicted of certain offenses involving minors if the person is not more than 10 years older than the minor and if that offense is the only one requiring the person to register.

The law is yet another example of how bad language can beget bad legislation.

“It’s absurd that this bill amendment, now law, didn’t get the publicity or outcry it deserved,” McClain says. “It should have been about protecting minors regardless of sexual identity and not simply addressing a law about discrimination, but amending a law with the core value of protecting the victims — in this case, minors.

“As I said before, language is everything,” he continues, “What should have been obvious rather than fixing the law that Senator Wiener claims disproportionately targets young LGBTQ people for mandatory sex offender registration is why not instead propose amendments to existing law to include all types of sexual intercourse or acts with a minor as an act that requires mandatory sex offender registration?”

As always, LAAPOA will keep members apprised of updates regarding police reform and public safety legislation.