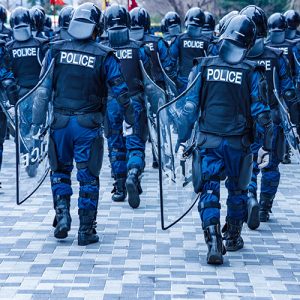 Imagine this scenario: A 24-year-old man and a 31-year-old mother are sitting in their car when a stranger suddenly approaches the vehicle, pulls out a gun and shoots both occupants multiple times from point-blank range. Then, as ambulances rush the pair to a nearby Los Angeles hospital, a group of self-proclaimed peaceful protesters block the building’s entrance and chant, “We hope they die,” while others try breaking into the emergency room. No, this isn’t a disturbing dystopia-themed movie plot — this is the type of horrific reality law enforcement faces in 2020.

As a result of the media and politicians pushing an anti-police narrative that promotes radicalism, defund-the-police ideology and the destruction of cities in the name of “social justice,” disturbing events like those we witnessed on September 12, when two Los Angeles County Sheriff’s Department deputies were brutally ambushed in broad daylight and blocked from entering the hospital’s emergency room, are only becoming a more regular occurrence.

“No matter what race or creed you are, it has never been clearer that if you are a police officer in America, your life and your rights don’t matter in the eyes of many simply because we don’t fit the narrative,” LAAPOA President Marshall McClain says. “These types of incidents like we just saw in Los Angeles happen around the country every day, and yet police officers continue to be scapegoated and demonized for all the country’s problems — while still being called upon to serve and protect the same people who want to abolish our great profession. Maybe these politicians and media outlets should try looking in the mirror to see who is really at fault for so much of the chaos our country is facing today.”

Since the death of George Floyd on May 25, an alarming 14 officers have been shot and killed, three of them falling victim to gunfire in a single-week span from September 3 to 10. This makes 37 officers who’ve been feloniously killed thus far in 2020, a 23% increase from this time last year. Countless others have been physically and verbally attacked, critically injured and threatened for simply wearing the badge.

“How many of these sickening events have to happen until the media and politicians stop glossing over these tragedies and repeating the same tired trope that these inexcusable actions are simply part of ‘peaceful protests’ that go awry?” McClain asks. “Rather than working together with law enforcement to put an end to the violence, many leaders in this country continue to fan the flames of the anti-police narrative by creating not only a divide between law enforcement and the community, but a racial divide as well.”

“Seeing fellow Black leaders resign from their post due to the hate they’ve received in recent months is heartbreaking. At the same time, it’s easy to see why these officers are saying enough is enough and stepping down because they are tired of being constantly blamed by politicians who care more about their public image than doing what’s right,” McClain says. “So, what’s the end game to these anti-police protests? Saying ‘Black lives matter,’ yet destroying Black-owned businesses and pushing people of color out of their positions because their profession doesn’t fit the narrative, is hypocritical and sets a very dangerous precedent.”

Because lawmakers continue to bend the knee to every demand from extremists without first seeking the opinion of law enforcement or considering the consequences to their decisions, the country has seen complete chaos and lawlessness erupt in major cities around the country. Places like Portland, which has had over 100 consecutive days of protests and riots, continue to show what happens when radicalism and incompetent leadership collide. After rioters recently vandalized and tried setting Mayor Ted Wheeler’s condo on fire — resulting in him moving out of his home in fear for his family and neighbors’ safety — Wheeler sided with extremists and again handcuffed law enforcement by announcing that Portland police are banned from using CS gas, a policing tool for crowd dispersal that’s used when officer safety is being threatened by violence.

“What [Wheeler] does not seem to understand is that the CS ban will force officers to use more impact munitions and use more physical force to disperse crowds,” Portland Police Association President (PPA) Daryl Turner said in an emailed statement. “His decision hurts community safety and impacts officer safety.” Turner, a Black officer whose been on the force for nearly 30 years, recently announced he’d be stepping down as PPA president after 10 years.

While stripping law enforcement of its budget and resources certainly hurts all American cities, the sad irony is that it is often predominately Black communities that are impacted the most. Several Black political leaders, such as Baltimore Republican congressional candidate Kim Klacik, have spoken out against defunding the police, stating that “defunding the police is the last thing you want to do” when a city like Baltimore had nearly 350 homicides in 2019 alone. “The people who end up being preyed on are Black people,” she told Sky News. “Of course [defunding the police] is not what we want. We want more funding so our officers can do more and recruit more people. In the streets, people want more police, but apparently, in the media, it’s another story.”

As the unrest and violence don’t appear to be going away anytime soon, much of law enforcement is forced to wonder what’s next. “After months of dangerous rhetoric being spewed about law enforcement from all directions, we have yet to hear how anti-police legislation, protesting and defunding the police will actually improve law enforcement and benefit our communities,” McClain says. “Removing funding and proposals such as indemnity insurance coverage paid for by the officer and qualified immunity will hurt recruitment and retention, hamper better and more frequent training, and hinder better equipment from being purchased, such as body cameras and safety gear.”