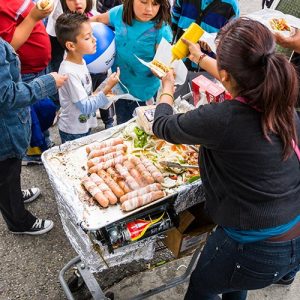 As coronavirus restrictions begin to ease up, certain businesses and venues across the country are reopening their doors to serve the public while adhering to social distancing and local and national health guidelines. During this time, many cities have stepped up to help business owners navigate, transition and adapt to the “new normal”; however, in the city of Los Angeles, a sizable group of business owners were initially left out of reopening discussions — the city’s 50,000 street vendors. The omission creates a complicated enforcement challenge for police.

In late May, Mayor Eric Garcetti announced the first phase of the city’s temporary L.A. Al Fresco initiative, which allowed restaurants to utilize private parking lots and sidewalks as outdoor dining areas via a no-fee 90-day permit. The mayor said the move would allow restaurants to turn a profit even at reduced capacity. Days later, during an L.A. City Council meeting to discuss a motion to expedite permitting for use of public spaces, Councilmember Joe Buscaino noted that the motion excluded eligibility for all street vendors and asked that it be amended. Despite emotional testimony from street vendors, the legislation was sent back to committee.

Garcetti swiftly came under fire from food vendors, who protested that during the coronavirus shutdowns they were being subjected to stricter enforcement for doing what restaurants were now allowed to do: sell food in public spaces. In March, the City Council passed a motion that called for a “temporary moratorium” on street vending and a crackdown on street food vendors without permits from the Health Department. While the motion did not ban vending completely, it made it difficult for many to work on city streets, as the LAPD and the Bureau of Street Services (BSS), which oversees sidewalk vending in the city, were urged to actively shut down food and vending stands without the necessary permits and issue warnings and citations to those not following the rules.

“City vending ordinances seem to be a perennial issue that law enforcement has to deal with,” says LAAPOA Director Sean Kleckner. “There are many layers to the law depending on where vendors set up and what they’re selling. Just getting vendors to ID for vending is difficult. Overall, it’s a tricky law to enforce.”

For example, the city of L.A. requires food vendors to have both city- and county-issued permits, which have been described as cost-prohibitive and require prerequisites to obtain. (To obtain a city permit, vendors first need a permit from the state. They also need to pay for the use of a county-approved commissary to prep their food and store their carts.) As of June, there were only 48 street food vendors out of more than 10,000 who had the necessary licenses to operate in the city legally. Despite this, many vendors — the majority of whom are women of color and immigrants hailing from economically vulnerable communities — choose to risk being fined or arrested in order to earn money during these tough economic times.

Another factor that may explain why vending is hard to enforce is that the rules and laws for street vending, which came about after a decades-long back-and-forth between vendors, politicians and cities statewide, were enacted fairly recently, meaning that some people might not be fully aware of them or what’s required to vend legally.

In September 2018, Governor Jerry Brown signed SB 946, the Safe Sidewalk Vending Act, which decriminalized street vending and required all California cities to develop their own regulations. In compliance with the new state law, in November of that year, the City Council voted on a plan to establish rules and regulations for street vendors (e.g., develop a permit system). In 2019, selling street food was no longer a crime under state law, allowing vendors to sell without worry until the city developed a licensing system. During that time, cities were hammering out a plethora of issues, such as figuring out the framework for licensing fees and enforcement and whether vendors should have liability insurance, undergo background checks and much more. In January 2020, Los Angeles finally launched its sidewalk permit plan — and then a few months later, COVID-19 hit.

After protests against the unfair criminalization of street vendors and the mayor’s exclusive Al Fresco program, the City Council in early June said that it was looking over a plan that would create a $5 million emergency fund to help street food vendors operate legally and provide economic relief. And in late June, Garcetti announced that the second phase of the Al Fresco program would include street vendors, but only vendors who were fully permitted to sell on the streets, meaning that the overwhelming majority of vendors still can’t legally sell food or goods currently.

As of this writing, many reopened restaurants and businesses in L.A., Riverside, Orange, San Bernardino and other large counties have been forced to close down for at least three weeks after a surge of cases statewide. Restaurants will still be able to offer takeout, delivery and outdoor-only dining, but it is uncertain how street vendors will be affected by this next wave of closures and whether the enforcement of vendors will be relaxed.

“In a time when officers are already receiving conflicting orders on how to police (or not) during the pandemic, the enforcement of vending ordinances has added yet another catch-22 situation for officers, who are once again being vilified for enforcing the law, which is complicated to begin with,” says LAAPOA President Marshall McClain. “Lawmakers need to step up to make clearer guidelines for enforcement or remove the ordinances altogether, especially during this volatile time when police–community relations are vital. If lawmakers fail to make the rules clear, it will only further complicate and damage the relationships we have with our communities.”