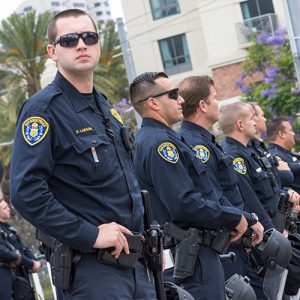 In the aftermath of George Floyd’s tragic death in Minnesota, many police unions, including those in California, have been at the forefront of instituting change across America. But rather than working with them to solve the problem, critics have instead attempted to blame police unions for the horrific actions of Officer Derek Chauvin and the three other officers criminally charged in Floyd’s death, attempting to remove legal protections for law enforcement and passing measures that make officers’ jobs harder than ever during these unprecedented times of unrest.

Police unions have been proactive in proposing solutions. LAAPOA immediately condemned the incident that led to Floyd’s death and urged the need for discussions over a national standard on police use of force, as well as establishing minimum training and recruitment standards, as our partners at PORAC have been advocating for years in Washington, D.C. In fact, just last year, PORAC played a critical role in helping pass SB 230 and AB 392. These two laws, which are the most significant changes to California’s use-of-force policies in over a century, mandates every California law enforcement officer receives the most robust training in the nation strictly designed to minimize the use of force. It also requires every officer to adhere to specific, publicly available guidelines for when they are authorized to use force.

“Every year, more people die in plane crashes than at the hands of police, yet the public has made police officers and police unions the biggest public enemies,” LAAPOA President Marshall McClain says. “We have taken every problem in American society and made the American police officer the catalyst. Well, if you’re looking for a solution to a problem and you start with a presupposed answer without all factors to the equation, how can you be confident the answer is correct?”

Earlier this month, the Los Angeles Police Protective League, the San Jose Police Officers’ Association and the San Francisco Police Officers Association also unveiled a reform plan to improve law enforcement and community outcomes, which includes creating a national database of former officers fired for gross misconduct that prevents other agencies from hiring them, as well as a national use-of-force standard that emphasizes reverence for life and de-escalation. In a joint statement, the unions pledged their commitment to “the continuous improvement of policing in America” and proposed that “this agenda should be adopted across our nation as an important step toward improving police and community outcomes.”

Yet, despite the efforts by local, state and national law enforcement associations to take the first steps needed to effect positive change, politicians — many of whom have yet to bring any plausible solutions to the table — continue to scapegoat police unions. The media has also done its fair share to fan the flames, with sensationalized headlines such as “Don’t reform police unions. Abolish them” from The Boston Globe and “The long tie between police unions and police violence — and what to do about it” from The Washington Post.

“This fallacy that police unions stand in the way of reform is complete misdirection,” says McClain. “I realize the world is upside down right now, but in what world does problems with an organization become the entire fault of the workers instead of those at the top of the organization? That’s what is happening here. We aren’t casting blame on the police chiefs, the sheriffs, the judges, the legislators, the mayors or the governors.”

The latest attempt to tear down law enforcement came when politicians and civil rights groups urged the Supreme Court to reexamine qualified immunity, a legal doctrine that protects government, state and public officials from lawsuits for conduct that does not involve a “clearly established” violation of the law. However, while qualified immunity does provide officials — including law enforcement officers — with a level of much-needed protection, make no mistake that it does not shield an officer from being liable if they act outside of the law and the scope of their job. Removing the doctrine would have disastrous effects on how officers do their jobs and would open up an onslaught of lawsuits from agitated rulebreakers. If officers are fearful of making an arrest because they’re under the impression they may be sued and lose their jobs, it’s safe to say proper policing in America would be impacted dramatically. Luckily, the Supreme Court saw right through the attempt at stripping officers of their rights when it recently declined to hear eight cases involving qualified immunity.

“Why are we talking about removing immunity for police officers against lawsuits when the immunity doesn’t protect the officer if the court finds the officer acted outside of the law?” McClain asks. “We aren’t talking about removing immunity for any other positions in government; not lawyers, not judges. So, once we ‘defund the police’ and start over in this new utopian society where law enforcement is no longer required — especially not with firearms — who is going to address those who refuse to abide by this new autonomous government?”

Unfortunately, New York Governor Andrew Cuomo has been eager to use this misinformation to his advantage by recently signing several anti-police measures into action. One of these laws, known as the discharge bill, requires officers to verbally report to their supervisor every time they fire a gun on duty, as well as prepare and file a written report within 48 hours of the incident. Another requires police officers and law enforcement reps to provide medical and mental health attention to any individual in custody. If they don’t, officers can be held liable for damages for anyone who does not receive medical attention and suffers a serious physical injury or has their injury exacerbated. Finally, Governor Cuomo repealed Section 50-A, a measure that shielded police disciplinary records from public view, which now potentially opens officers up to threats and harassment.

While some of these measures may sound like a step in the right direction on paper, members of the Police Benevolent Association of the City of New York (NYC PBA), the union representing rank-and-file NYPD officers, believe the governor is simply dumping the state’s problems onto law enforcement and forcing officers to spend less time protecting the community.

“New York state had been failing our communities for decades: failing to provide economic opportunity, failing to educate our youth, failing to care for the vulnerable and the mentally ill,” NYC PBA President Patrick Lynch said in a statement. “Police officers spend our days addressing issues caused by these failures. Now, we won’t even be able to do that. We will be permanently frozen, stripped of all resources and unable to do the job. We don’t want to see our communities suffer, but this is what Governor Cuomo and our elected leaders have chosen.”

Will similar situations occur in California? If recent history has told us anything, the answer is likely.

“I never thought we would come to a place in America where you are guilty until proven innocent, but apparently that’s the case when your job is that of a police officer, with attempts to remove the inalienable rights of those who are duty-bound to ensure your rights are protected,” McClain says. “No police union or otherwise writes laws, no union hires or fires employees, no union decides on who to prosecute or who not to prosecute. If we can vilify police unions today, we can vilify and remove other unions tomorrow.

“Solutions to a true reform must be a process that is shaped by all parties involved, not one side, not one group and not one political party. There isn’t one group that has all the solutions. If that were true, there would be only one signature on the United States Constitution. Let’s please stop throwing away common sense and reverting towards things that are politically expedient rather than fundamentally sound. A solution that will truly be long-lasting and cause positive reforms for the betterment and advancement of all parties involved is what everyone’s main goal should be. We need to strive for solutions that our children and children’s children can live with so that changes we make today can make for a better and brighter tomorrow.”