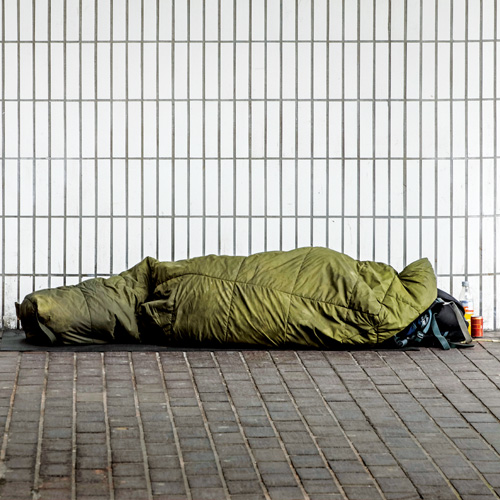 With homelessness on the rise across the United States, major metropolitan airports must increasingly contend with the issue of people seeking shelter in their public spaces. Hartsfield-Jackson Atlanta International Airport and San Francisco International Airport are among the busy travel hubs that have struggled to handle a surging homeless population, and just last week, Dallas–Fort Worth International Airport announced that it would limit use of its facilities to “authorized users, including ticketed passengers, people meeting or assisting customers and employees” in order to keep homeless people from sleeping there.

At LAX, up to 130 homeless individuals set up camp throughout the terminals on any given night, the majority of them suffering from mental health conditions or substance abuse issues that may make them a threat to themselves or others. The Los Angeles Airport Police Department responded to more than 1,000 incidents involving the homeless, including alleged crimes such as assault, theft and vandalism. As officers work to preserve public safety for all members of the airport community, the LAXPD’s Crisis Intervention Team (CIT) plays a crucial role in helping to connect homeless people with shelter, health care and support services, as well as educating LAX tenants on homelessness issues and safety tips.

“Our role at LAX is to provide help to individuals who are in need of assistance and try to give them the best possible outcome to resolve their quality-of-life issues,” CIT Senior Lead Officer Shane Young says. That means coordinating with a homelessness consultant along with city and county agencies and other organizations, including Los Angeles Homeless Services Authority (LAHSA), People Assisting the Homeless (PATH) and St. Joseph Center, to find solutions for homeless people seeking help. “Our team, with the assistance of other groups, has been able to reunite individuals with their family members, find them jobs and get them assisted living,” Young says.

CIT works with a clinician employed by the L.A. County Department of Mental Health (DMH) to conduct evaluations of homeless people who may be mentally ill. The team also monitors those who are arrested or placed on 5150 WIC holds, working with the City Attorney’s Office, L.A. County DMH, LAPD Mental Evaluation Unit (MEU) and other outreach providers to help homeless people in need of mental services while in custody. “One of the best things our team discovered is the Case Assessment Management Program (CAMP) that LAPD uses,” Young explains. He’s currently in charge of the program, which identifies, tracks and develops customized long-term intervention strategies for facilitating treatment, minimizing violence and reducing repeat encounters with emergency first responders by pairing law enforcement with psychologists, nurses and social workers. In addition to invaluable partnerships with MEU and DMH, he says, “without information from fellow teammates and officers, the program would be nonexistent. Since we have placed CAMP into our department we have been successful in getting individuals the best mental health services.”

As the magnitude of the homelessness crisis has grown, so has the CIT. Five years ago, it was just Young and another senior lead officer; now, he works with seven officers and a sergeant. But because the scale of the problem is so much bigger than LAX — as Young sums it up, “in the city of Los Angeles, there is a minimum supply of beds available for individuals who are experiencing homelessness and/or mental illness” — that means their efforts to help individuals can only do so much to stem the tide. “The biggest challenge for us is currently that the airport is open to the general public 24/7, meaning anyone can come in without being a ticketed passenger, whereas other airports around the United States have restrictions.” Young and his team compiled information about other airports’ policies in the hope that LAX would eventually follow suit. In 2015, for example, both Washington Reagan Airport and New York’s LaGuardia Airport announced that they would close pre-security lobbies and waiting areas overnight to those who are not ticketed passengers, while Honolulu Airport closed its lobbies and baggage claims completely at 10 p.m. On March 12, 2020, LAWA announced that LAX’s Central Terminal Area would be closed to the public between midnight and 5 a.m. each day to allow cleaning crews to perform maintenance, allowing access only to employees, ticketed passengers and those meeting or assisting them.

Despite the challenges along the way, Young says, “Our team has had success with many individuals, and without our partnerships and great core team the airport would have more problems to address.” In addition to the dedication of the team members and strong cooperative relationships with other organizations, investment from department and airport leadership in the important work of the CIT has also been a major factor in its success, he says. “Without the support from our current management, we would not be able to function or exist. We will continue to do our best in providing individuals who are experiencing homelessness or mental illness the best outcome possible.”

“LAXPD’s unit of specially trained officers is a model for other agencies across the country to adopt as the homelessness crisis continues to impact our nation’s airports and other public spaces,” says LAAPOA President Marshall McClain. “LAAPOA is thankful that our Chief recognizes the importance of the CIT, adding to the Department’s budget and expanding the size of the unit to not only offer compassion and aid to some of the most vulnerable members of our society, but also help ensure that LAX remains a safe place for its workers, travelers and the wider community.”