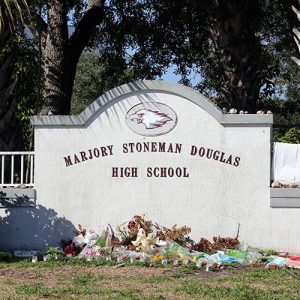 Last month, Broward County, Florida, Deputy Scot Peterson was charged for his response — or lack thereof — to the February 2018 shooting at Marjory Stoneman Douglas High School that killed 17 students and teachers and injured 17 more. He faces 11 felony counts, including child neglect, culpable negligence and perjury charges. Despite being formally charged over a year after the incident, the school resource officer has been ridiculed ever since the days following the incident, even gaining the nickname of the “Coward of Broward,” for his failure to act.

According to a report from the Florida Department of Law Enforcement, Peterson was the only armed guard on campus at the time of the shooting, but “did absolutely nothing to mitigate” the incident, which lasted a full six minutes. His inaction was widely seen in footage that surfaced just days after the shooting, which shows Peterson waiting outside the building where gunman Nikolas Cruz was on his rampage. Peterson reportedly remained in the position for more than 45 minutes. His inaction has been criticized by law enforcement, the media, the public and even President Donald Trump, as they believed his intervention could have helped save lives.

Beyond Peterson, the entire Broward County Sheriff’s Office came under fire as more investigations into the shooting emerged that revealed a slow police response and a lack of preparedness. According to a state commission report, seven sheriff’s deputies also stayed outside the building, and officers were scrambling to retrieve bulletproof vests from their cars. Officers also reported faulty radios and issues with communication between other first responders. The commission found that eight Broward deputies ignored protocol for active shooter situations, which calls for “pursuing a gunman to try to disarm him.”

At the time of this writing, the Broward Sheriff’s Office has lost its law enforcement accreditation after criticism over its handling of the shooting, and four officers including Peterson have been fired. While the decisions department leadership and officers made on the day of the incident cannot be fully understood, their failures point to a need for increased training in active shooter situations, as well as a troubling problem affecting the law enforcement profession.

“The Parkland shooting is a cautionary tale about what happens when our officers are repeatedly criticized for their actions,” says LAAPOA President Marshall McClain. “Many officers have become too afraid to do their jobs out of fear of being judged and demonized, and their hesitation and failure to act during emergency situations puts both themselves and the public in danger.”

In California, legislators, civil liberties groups and law enforcement have been grappling with this issue in the debate over use of force, specifically in hashing out the bills AB 392 and SB 230. At this time, only AB 392 is headed to the governor’s desk, which means that soon officers may only be able to fire their guns “when necessary in defense of human life.”

But it’s important to note that before AB 392 got to this point, its troubling original language had lawmakers and proponents of the legislation basically saying that it was better for officers to act in the way Peterson had. The bill had called for officers to weigh the option of not taking action or retreating instead of using deadly force. “If California were to pass legislation requiring an officer to retreat, reposition or disengage and not use force, it would place our officers in a bit of a Catch-22,” McClain says. “Could that officer later be held liable, found criminally negligent or be sentenced to jail for the inactions that reportedly many activists would rather see?” In Florida, the answer was yes.

This aversion to force use can be seen even closer to home. The Los Angeles Board of Police Commissioners has stated that it would rather an officer retreat from a suspect with a knife to avoid using deadly force. The LAPD and other agencies have even awarded Preservation of Life medals to officers who could have used deadly force but didn’t. In Florida, the officers failed to act and the lives of innocent students and teachers were mercilessly taken.

“The bottom line is that this disapproval over use of force has been setting a potentially deadly stage for officers,” McClain says. “What happened in Parkland is just one of the many examples we have seen in the media to date.

“That’s why SB 230 is so important — it balances AB 392 by providing officers with the tools they need to create training and protocols that will help them better react in active shooter situations,” McClain continues. “The job to protect and serve is already immensely difficult. Officers face some of the most unimaginable, unpredictable and dangerous situations day in and day out. Placing restrictions on the way they react and punishing their split-second decision-making will cause officers to freeze when they’re needed most, and thus lead to more lives lost.”

SB 230 currently faces additional votes in the Assembly. As always, LAAPOA will keep members apprised of any updates regarding use-of-force legislation.