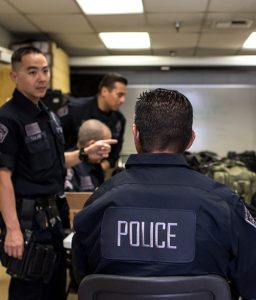 Day after day, public safety officers are highlighted in the headlines for encounters ending fatally or unfavorably. For example, an officer in Georgia was recently lambasted in the media for having shot and killed a Georgia Tech student instead of using other, less lethal means to manage the situation. Of course, such stories don’t tell you all the details of what occurred or provide context to the procedures involved. Unfortunately, in a time of intense scrutiny of law enforcement, this negative press has become commonplace.

There is a large issue that links these unflattering narratives: The need for budgeting and funding law enforcement training and recruitment programs.

“The expectations placed on law enforcement by politicians, the media and the public are high — and almost impossible to meet due to understaffing and the lack of resources available for officers to address all those demands,” says LAAPOA President Marshall McClain.

Professional development is needed to advance in any career. Training is necessary to keep up with changes in technology and the latest proven leadership techniques. Public safety officers, like all other professionals, need to remain up to date in an ever-evolving world. They need training on the tools, strategies and procedures that will help them perform better, avoid negative outcomes and be more adept at handling their greatly expanded role in today’s society.

The U.S. Department of Justice’s Community Relations Services’ Guide to Critical Issues in Policing lists uses of force, management of mass demonstrations and encounters with persons with mental illness as the prevalent issues in the field — all issues that the press has criticized law enforcement for handling inefficiently. For example, an Arizona officer was recently vilified for tackling an autistic teenager, not recognizing the boy’s condition prior to the takedown. According to the DOJ’s recommendations, in order to prevent such mishaps, departments need crisis intervention teams (CITs) with officers trained extensively in crisis-intervention techniques working alongside mental health workers. While an ideal solution, this is simply not realistic, as not all law enforcement agencies have the budgets and manpower to create and maintain these teams.

So, with all the studies and statistics showing a need for training, not to mention law enforcement’s own advocacy for it, how are states and local governments responding? Here in Los Angeles, the answer was more rules imposed on law enforcement, rather than budgeting for resources. Earlier this year, the Los Angeles Police Commission re-introduced de-escalation into the LAPD’s lexicon in its “solution” to prevent the rise in shootings and suicide by cop.

The Commission’s decision came after analyzing use-of-force incidents throughout 2016, in which they found that in 50% of the 46 cases reviewed, tactical errors such as forgetting a Taser or lack of communication between partners were the cause of uses of force. As seen in the Arizona and Georgia cases, such unintentional mistakes can result in huge consequences for the officer.

Tactical errors can be rectified with ongoing training and assessing which strategies are most effective.

“What politicians, policymakers and the media need to understand is that dealing with offenders in the heat of the moment is often dangerous and unpredictable, and may not allow for calm, gradual de-escalation tactics,” says McClain. “Unrealistic expectations place our officers in a precarious situation if their decision-making is impacted by concerns about the potential consequences of applying force. Even if it’s absolutely necessary, they know they could be demonized in the press, punished by their departments or targeted by the public.”

Lawmakers also need to address recruitment to keep up with the influx of criminals being released under realignment and Props 47 and 57. As we recently covered, prison reform legislation in California has resulted in the release or resentencing of nearly 5,000 people from state prisons to cut costs. With most released prematurely due to decriminalized offenses, law enforcement is faced with the burden of dealing with abundant repeat offenders. The 1994 Crime Bill, which funded the recruitment of 100,000 new officers nationwide, demonstrated that recruiting more officers can contribute to a decrease in crime nationally. Not surprisingly, other studies also show that increased recruitment efforts and effective management of those recruits can reduce crime rates overall.

Effective policing begins with well-managed, well-funded departments. The Trump administration’s lifting of Obama-era restrictions in the federal 1033 Program was a recent, welcome show of support for law enforcement, but we need the same amount of political and financial support for the training and recruitment of the officers who will be using that equipment. New research from the Heritage Foundation, in its report Policing in America: Lessons from the Past, Opportunities for the Future, champions the need for more political backup of law enforcement. For the study, the foundation worked alongside federal, state and local law enforcement agencies to identify policing issues and proactively find solutions, including combating allegations of racism within departments and false narratives crafted by the media, as well as the need for improving police–community relations and SMART policing.

Everyone has a part to play in advancing the police profession and reducing uses of force, McClain points out.

“State and local government need to use this data to inform themselves on the issues that we’re facing,” he says. “The bottom line is that all of this pressure is coming from people who are simultaneously telling us how to do our jobs and taking away our resources to do so effectively. Without proper training or proactive recruitment efforts, they are setting officers up to fail.”