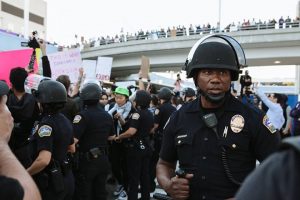 LAAPOA joins peace officers throughout the nation in welcoming the Trump administration’s lifting of Obama-era restrictions on the federal 1033 Program, which provides surplus military equipment to federal, state and local law enforcement agencies. Threat trends continue to evolve — mass shootings perpetrated by suspects using high-powered weapons, violent ambushes of peace officers, and domestic and international terrorism are all on the rise. To confront these threats, first responders need the proper equipment and training, using the tools and tactics best suited to the task.

The repurposing of excess military gear for law enforcement began in the 1990s, as part of the war on drugs. In its current form, the 1033 Program was signed into law by President Bill Clinton in 1996 and has since transferred $6.6 billion in hardware from the Department of Defense to more than 8,000 American law enforcement agencies nationwide. While preference is given to counterdrug and counterterrorism uses, any agency may acquire property to aid in arrest, apprehension or any bona fide law enforcement purpose. According to the Defense Logistics Agency (DLA) Disposition Services, “Requisitions cover the gamut of items used by America’s military — clothing and office supplies, tools and rescue equipment, vehicles, rifles and other small arms.” Commonly requested items include cold-weather apparel, sandbags, medical supplies, sleeping bags, flashlights and electrical wiring, as well as body armor, helmets, shields and other protective gear.

As the DLA reports, “Of all the excess equipment provided through the program, only 5% are weapons and less than 1% are tactical vehicles.” Yet it was those items that disproportionately drew negative attention to the 1033 Program in the wake of the 2014 Michael Brown shooting in Ferguson, Missouri, and subsequent controversies over police actions. When officers deployed armored vehicles during the protests and riots in Ferguson, the news media ran numerous “exposés” detailing how departments across the U.S. were obtaining such military-grade equipment from the federal government (even though the tactical vehicles used in Ferguson were actually purchased by local agencies, not obtained through the 1033 Program). In response to the ensuing public outrage about the “militarization” of police, in January 2015 President Obama issued an executive order establishing the Law Enforcement Equipment Working Group (LEEWG) to study the issue. Based on the group’s recommendations, controlled and prohibited equipment lists were established to restrict the items available to law enforcement from federal agencies or through federal funding. Prohibited items included tracked armored vehicles, grenade launchers, bayonets, and firearms and ammunition of .50 caliber or higher; controlled items included wheeled, armored or tactical vehicles, breaching apparatuses and riot helmets. 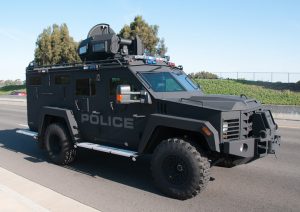 While the restricted categories make up only a tiny percentage of the gear distributed through the 1033 Program and include items beyond the scope of routine daily law enforcement operations, that doesn’t mean that agencies have no need for such specialized equipment. To those unused to law enforcement, an armored vehicle or a heavily armored officer might seem an intimidating or aggressive image, but the main purpose of such gear is to provide a higher degree of protection. There are countless stories of how military-grade equipment has saved lives over the years. After the 2015 mass shooting in San Bernardino, law enforcement used armored vehicles for protection as they surrounded and approached the terrorists’ heavily armed SUV, and only one officer was injured in the ensuing shootout that killed both suspects. During the 2016 mass shooting at the Pulse Nightclub in Orlando, police used a controlled explosion to distract the killer and an armored vehicle to breach the walls, and one officer survived being shot in the head thanks to his ballistic helmet. And in the wake of Hurricane Harvey in Texas and Hurricane Irma in Florida, first responders from numerous agencies are using vehicles and other equipment acquired through the 1033 Program to navigate floodwaters, rescue stranded citizens and deliver lifesaving medical supplies.

To many first responders, the previous administration’s decision to restrict access to equipment with such potential to safeguard both police and the public was emblematic of society’s increasingly pervasive lack of trust in law enforcement and lack of concern for officer safety. With controversial officer-involved shootings dominating the headlines, and increased scrutiny and vilification of police by politicians and the public, it’s easy for some observers to jump to the conclusion that giving officers specialized gear makes them more aggressive. However, according to new research from the University of Tennessee, the use of military equipment by police departments has the opposite effect, leading to more arrests for drug possession and sales, reduced citizen complaints, reduced assaults on officers and line-of-duty deaths, and no increase in citizen deaths. 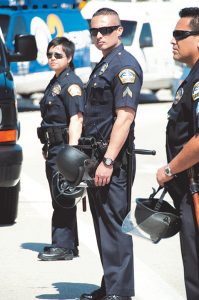 This data verifies what police already know: The 1033 Program is a vital resource for public safety. It allows small and underfunded agencies access to the advanced tools they need, saves billions of dollars in state and local revenue, and efficiently repurposes obsolete or surplus military items already paid for by taxpayer dollars so they can be utilized again at the local level in the fight against violent crime, drug trafficking and terrorism. It was a huge boost for law enforcement morale when, in a recent keynote address, Attorney General Jeff Sessions announced that President Trump would sign an executive order lifting the limits on surplus military equipment. “Those restrictions went too far,” he said. “We will not put superficial concerns above public safety…. The executive order the president will sign today will ensure that you can get the lifesaving gear that you need to do your job and send a strong message that we will not allow criminal activity, violence, and lawlessness to become the new normal.”

“LAAPOA welcomes the restoration of the full 1033 Program and the support for law enforcement it signifies,” says President Marshall McClain. “At a time when policing budgets are being cut or repurposed, more and more crimes are being decriminalized, and more so-called nonviolent felons are being given early release from state prison, why should we further hamper peace officers in doing their jobs to keep the public safe? Agencies that choose to take the opportunity to acquire these advanced tools save taxpayer money while still remaining accountable to elected officials and voters at the local level. It does not mean that police officers will be running around with bayonets affixed to a rifle. A blanket nationwide ban on this equipment shows a greater concern about a distorted image of law enforcement than about the reality of what it takes to protect our communities and the officers who put their lives on the line every day.”