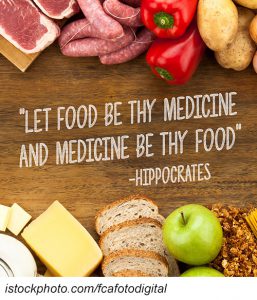 In our last article, we addressed insulin resistance (IR) and why it’s causing so many in our country, especially first responders, to become victims of heart disease. The main point is that we all need to first identify this deadly problem in ourselves. Medical professionals are now estimating that up to 70% of police officers over the age of 40 are insulin resistant. So be proactive and do this easy preliminary screening on yourself. With your latest blood test from your last physical, take your triglyceride (TR) number and divide it by your HDL number. If that TR to HDL ratio is greater than 3.0, there’s a high chance that you are insulin resistant, and your next step should be to get the advanced NMR cholesterol test done. The NMR will confirm whether you are indeed insulin resistant, providing you with an exact IR score. The NMR will also show you how close or far you are from being at risk of a heart attack.

“Let food be thy medicine and medicine be thy food.”

The good news is that IR and Type 2 diabetes are 100% reversible and, believe it or not, medicine is not the best solution. So whether you are insulin resistant or not, you need to know that nutrition can play a critical role in improving your overall health and reverse the ill effects of so many medical problems of our Western society. But I first ask that you erase everything you’ve ever learned about nutrition and start all over, because conventional teaching on what constitutes a “healthy diet” has held true far too long with little to no scientific evidence. The dietary guidelines traditional medical practitioners have been giving us have been the same for decades, yet our country continues to get sicker and sicker, and the pharmaceutical industry continues to get richer and richer. Things that make you go hmm…

In recent years, a new generation of medical professionals has been shifting the nutritional paradigm by proving that we can be healed by food, i.e., nutritional changes. Prominent physicians, scientists, dieticians and researchers all around the world are now confirming that a low-carb, high-fat (LCHF) diet can improve overall health and, most importantly, reverse IR and Type 2 diabetes.

The LCHF diet just makes sense to control insulin levels. Because we know carbohydrate intake has the most influence on insulin production, it would be smart to go straight to the source and eliminate as many carbohydrates from the diet as possible. And because dietary fats have little to no insulin response, increasing fat intake would make the most sense, especially since we’re able to use fats as an alternative energy source to carbohydrates.

“But isn’t eating all that fat going to make me fat and give me a heart attack?” That’s what old-school wisdom would tell us — that eating fats makes us fat and clogs our arteries — but it’s the furthest thing from the truth. Dietary fats do not make us fat. High insulin levels make us fat! Endocrine experts know that when insulin levels are suppressed, it’s nearly impossible to become fatter. And in the absence of carbs, studies are showing that a high-fat diet will actually improve cholesterol scores. So insulin is the culprit!

Controlling insulin levels is not the only benefit of an LCHF diet. Once you adapt to an LCHF diet, your body shifts from being carbohydrate-dependent (sugar burning) to a fat-burning machine. What that means is, your body becomes better at using stored body fat for fuel. I’m not talking about the fuel you need when exercising. I’m talking about fuel/energy that you need throughout the day, even when you’re sleeping. For health, it is always better to burn fat than sugar. And who wouldn’t want to be an optimal fat-burner? Another added bonus of the LCHF diet is that hunger and cravings are suppressed, because insulin is also known as the hunger-triggering hormone. That is why when we eat the typical Western diet, it’s a vicious cycle of eating junk, followed by hunger and cravings, followed by eating more junk…over and over and over. Cut the carbs and that hunger hormone is no longer there.

Here are some of the other great health benefits of LCHF eating:

They say the best experiments are the ones where you are your own experiment (n=1, or a single-case study). There are an abundance of LCHF books, recipes and resources available to you. Give LCHF a committed try and see for yourself. See what it will do to all your health markers, as well as your overall well-being. I promise within weeks, the difference you’ll see both inside and out will be priceless, positively affecting the rest of your life, your family and your career.

We all need to take ownership of our health. Our industry is in a major crisis and is counting on us!