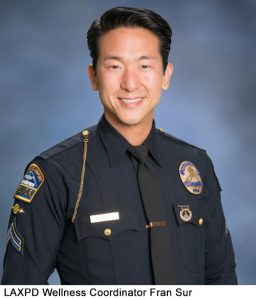 There’s no question that our country’s health is in crisis. Year after year, the leading cause of death is heart disease, and the number of victims continues to grow annually. The obesity rate is also skyrocketing; medical professionals predict that by 2030, over half of our adult population will be obese. Law enforcement officers definitely don’t get a free pass when it comes to health. We are now the most obese profession in the U.S., with 40% of officers falling into that category and 80% classified as overweight. Police managers are keen to enforce strict training standards for firearms and driving tactics to protect their troops from the obvious on-duty deaths. But they’re missing the point.

This past January, the LAX Police Department hosted the very first wellness conference for law enforcement officers in Southern California, titled “Why Cops Die Young.” Typically, one might think most police officers killed during their careers die from shootings and traffic accidents. But the truth is that if you take into consideration all 24 hours of on- and off-duty time each day in a police officer’s career, the number one killer is, believe it or not, heart disease. The statistics are startling: The average age of Americans who die from heart attacks is 65 years. For police officers, that number is 49 years.

Why are cops dying so young from heart failure? Is it the heart itself that’s weak? Is it because so many of us are overweight? Well, a new generation of doctors now knows that the top risk factor for heart disease is actually insulin resistance, also known as pre-diabetes. Insulin resistance is the body’s inability to properly absorb ingested carbohydrates and sugars. Insulin is the body’s critical hormone that’s responsible for delivering sugars into our cells. But when we eat too many carbs and too often, our body is stressed to keep up with insulin production to accommodate all the sugars. Do this over and over daily, for years, and sooner or later your body will get resistant to the process and become carbohydrate intolerant, aka insulin resistant.

Think about caffeine: You probably remember that the first few times you ever drank coffee, you felt the biggest caffeine rush ever. But after drinking coffee often and a lot over time, your body became resistant to the caffeine and now you don’t get nearly the same energy rush as you once did. That’s the same thing that happens with carbohydrate intake – when you’re insulin resistant, you’re not as efficient at absorbing the carbohydrates as you once were.

Everything we eat is one of three things: a protein, a fat or a carbohydrate. Proteins have a low to mild insulin response from the body, whereas carbohydrates have the most stimulating insulin response. Fat, the category we’re all taught is bad, has little to no effect on insulin production…and that’s a really good thing!

So what to do? First, get tested to identify if there’s indeed a problem. There is an advanced cholesterol test available called the NMR LipoProfile, which will clearly show if you are insulin resistant and how close you are to possibly having a heart attack. If you’ve ever had your cholesterol levels checked by your primary care physician, it was probably with a traditional lipid panel – total cholesterol, HDL, LDL and triglycerides. Studies are proving that those numbers are not accurate predictors for heart disease because they test actual cholesterol levels. Experts now know that it’s not the amount of cholesterol (LDL-C) itself that’s important, but the actual number of particles (LDL-P) carrying cholesterol throughout the blood. You could have the same amount of LDL cholesterol, but the more LDL particles (carriers) you have, the more likely they are to be smaller in size, which makes them prone to collecting in the coronary artery walls, causing plaque to develop and block the passage of blood. This is what leads to heart failure.

So the bottom line is: Get the advanced NMR test done. If your doctor won’t sign off on it, find a third-party medical clinic that offers it. Better yet, law enforcement officers across the nation should start an initiative to get their city, county or state to make regular blood screenings department policy. Knowing markers like those found in the NMR test will not only save lives of police personnel, but also save agencies hundreds of thousands of dollars in health care. It’s a win-win for all.

In my next article, I’ll talk about what to do in order to prevent and even reverse insulin resistance. The great news is that it’s 100% reversible through lifestyle changes, particularly dietary ones.