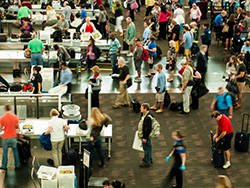 The TSA has faced intense scrutiny in recent weeks as frustrated fliers reach a breaking point over hours-long security lines at U.S. airports. Ongoing staffing issues, heightened screening measures in the wake of the Brussels airport bombing, and the approach of what promises to be a record-setting summer travel season have converged into a perfect storm that highlights the shortcomings of the current aviation security system. The TSA’s latest struggles to efficiently operate checkpoints point to how far it has strayed from what it was designed to do: screen passengers and cargo. To ease the gridlock and protect passengers, lawmakers need to refocus the agency’s attention and resources on its core mission — before a bad situation gets worse.

TSA screening lines have been growing all year. Airports in Atlanta and Minneapolis–St. Paul began sounding the alarm as early as February, and the problem has only snowballed from there. After a May 13 TSA screening-system breakdown there led to a massive delay involving more than 3,000 checked bags, Phoenix Sky Harbor became the latest in a series of major airports — following Atlanta, New York and Seattle — threatening to break ties with the TSA and privatize airport security. On May 17, the TSA apologized for three-hour security waits at Chicago O’Hare Airport that caused 450 passengers to miss their flights and become stranded overnight, sleeping on cots in the terminal. With #IHateTheWait trending on social media and airlines taking matters into their own hands (American chipped in $4 million to hire workers to perform non-screening functions such as bin running and queue management), lawmakers are scrambling to investigate solutions.

At its root, the problem is straightforward: fewer TSA screening personnel and more fliers. The number of travelers passing through U.S. airports has jumped 15% since 2013, from 643 to 740 million a year, while the number of TSA screeners dropped from 47,000 to 42,000 in that same period. With checkpoints already short-staffed, orders to use more enhanced screening techniques, in response to terrorist attacks in Europe and last summer’s highly publicized TSA lapses, have only bogged down the process further. The TSA has announced that it will add 768 screening personnel, expedite the hiring process and maximize overtime, using $34 million in additional funds approved by Congress. The TSA agents’ union claims that a whopping 6,000 more screeners are needed to make up the shortage. But some legislators and aviation security experts caution that simply throwing money at the problem won’t fix the underlying issues.

“The TSA already has enough funds and staff to avoid these long lines that we are seeing across the country,” LAAPOA President Marshall McClain explains. “The problem is that it is squandering those resources in areas other than security screening, jeopardizing its critical function.”

Specifically, the agency has attempted to expand its scope beyond its capability. One example is the Visible Intermodal Prevention and Response (VIPR) program, which deploys roving teams of screeners at highway checkpoints, train and subway stations, political conventions, and even NFL and NCAA games. In 2013, the program consisted of 37 teams with a budget of $100 million, despite a lack of evidence that its efforts are effective or necessary, since the same locations are already covered by local and state police, highway patrols and other law enforcement authorities. The TSA’s controversial Behavior Detection Officer (BDO) program is another instance of overreach. Between 2008 and 2013, the agency spent $900 million to deploy 3,000 personnel to airports to profile suspicious passengers. According to the General Accountability Office, in a 2013 report entitled “TSA Should Limit Future Funding for Behavior Detection Activities,” only 0.59% of the suspects flagged were arrested, none was charged with terrorism, and the program’s techniques were “the same as or slightly better than chance” in accurately identifying deceptive behavior.

“By its own administrator’s admission just this month, TSA is not a law enforcement agency,” says McClain. “So it needs to stop trying to act like one. These attempts to expand into law enforcement functions have not been successful and are in fact counterproductive, because its agents do not have the specialized training and authority that law enforcement officers have.”

If lawmakers fail to recognize this fact, the situation is unlikely to improve. A case in point is New York Senator Chuck Schumer’s push for more TSA canine units to help speed screening lines. This short-sighted proposal overlooks the fact that when a TSA dog detects explosive material, TSA agents are limited in their response. Instead of isolating the subject and evacuating the area, they simply allow the individual to continue through the checkpoint and then conduct a secondary screening. This not only endangers surrounding travelers by allowing a suspect with possible explosive material further into the congested checkpoint area, but also adds to wait times and manpower shortages by generating further screenings. And if the situation escalates, TSA agents have no authority, equipment or training to mitigate the threat, but instead must call for airport police to take action.

With the media already referring to the summer travel season as “Flightpocalypse,” lawmakers are blaming airline baggage fees while the TSA points the finger at passengers for bringing prohibited items through checkpoints and not signing up to pay extra for its PreCheck program. But the best way to get screening lines moving without sacrificing safety is also the simplest: Put more screeners at checkpoints, and open and staff all checkpoints, especially at peak hours. LAAPOA and its aviation security partners believe that the TSA should commit itself to this priority by reassigning BDO and VIPR personnel to screening duty, and repurposing funds from those programs to hire more screeners.

“The TSA’s passenger and baggage screening functions play a key role in ensuring traveler safety at our nation’s airports, but the agency has become distracted from that purpose,” says McClain. “Now we are experiencing the disastrous effects. As airports continue to be high-profile terrorist targets, the increase in crowds and chaos at checkpoints is becoming its own urgent security issue. TSA doesn’t need more dogs, it doesn’t need a behavior detection program, it doesn’t need firearms, and it doesn’t need badges. It needs to concentrate its efforts on its core mission of screening passengers and cargo and leave law enforcement to airport police, who are highly trained for and dedicated to that mission. Everyone doing the jobs they were trained to do helps the multifaceted aviation security system work. When agencies begin straying from their core mission, it only creates a fractured security system and greater confusion, which helps nobody but those who wish to do us harm.”