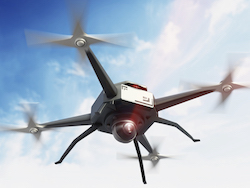 Once the stuff of science fiction, drones are now becoming a regular feature of our skies. Thanks to rapid technological advances, anyone can buy a small, powerful unmanned aircraft system (UAS) online for less than $500, and the military, law enforcement, businesses and hobbyists find more uses for remote-controlled fliers every day. This skyrocketing popularity is far outpacing regulators’ ability to keep up with the new era of aviation, which means growing safety risks — especially when drones end up on a collision course with passenger planes.

Increasing numbers of drones are entering airport perimeters, and it’s only a matter of time until catastrophe strikes. Often too small to show up on air traffic controllers’ radar screens or to be detected by planes’ collision-avoidance systems, drones pose a significant threat to flight safety. Like birds, if they get too close to a plane they can be sucked into an engine, disabling it, or strike the cockpit windshield with great force. Whether accidentally piloted into harm’s way by an unsuspecting amateur or deliberately steered toward a commercial flight by a terrorist, drones have the potential to cause deadly damage to planes taking off and landing at our nation’s airports.

Citing recent “reckless use of unmanned model aircraft near airports and involving large crowds of people,” in June 2014 the FAA restricted unauthorized use of drones under 55 pounds. In a new interpretation of existing federal rules, the agency mandated that drones cannot fly within five miles of an airport without permission from the control tower, and the UAS must stay below 400 feet in altitude and within eyesight of its operator. These guidelines apply only to recreational drones; the FAA has banned commercial drones until it can issue official regulations, but the distinction between the two types of use is a legal gray area.

Unfortunately, the measures appear to do little to prevent drones flying too high and too close to airports. In November, new FAA numbers showed that pilots had reported 25 near-collisions with drones in just the five months since the guidelines were set. Many UAS operators remain unaware of the rules, while advocates of free and open drone use deliberately flout them — with lenient enforcement contributing to the problem. The small size of the aircraft and the lack of any registration or licensing system make it difficult to locate culprits and hold them accountable for entering restricted airspace.

In February 2015, after a UAS almost collided with a Southwest Airlines jet approaching LAX at 4,000 feet, LAAPOA added to the chorus of voices calling on Congress and the FAA to ensure that airports are protected from intentional and unintentional drone interference. As the first responders to threat incidents at Los Angeles airports, the LAXPD is especially concerned with securing the airspace in and around these vitally important facilities and safeguarding the traveling public from possible accidents or attacks against planes. LAAPOA urged the FAA to prohibit the use of all drones near airports and asked Congress to require airports use drone mitigation technology that uses the radio signal/transmitter from the drone to detect when it enters a restricted zone.

The situation is likely to get worse before it gets better, and U.S. airspace — already the busiest and most complex in the world — is on the verge of being flooded with thousands of additional fliers. For several years, UAS manufacturers, the military, members of Congress, and corporations eager to exploit the economic potential of drones have all exerted tremendous pressure on the FAA to draft rules that will open the skies to commercial unmanned aircraft. In February 2015, the agency proposed a framework of regulations to “facilitate integration of small UAS into the U.S. aviation system.” Under these suggested rules, a nonrecreational drone operator would have to pass an aeronautical knowledge test and obtain a certificate every two years. As with recreational drones, the UAS would be forbidden from entering an airport’s five-mile radius without permission, with an added specification that the operator must see and avoid manned aircraft, yielding if there is a risk of collision and discontinuing the flight if it poses any hazard to other aircraft, people or property.

Yet aviation safety advocates fear that the FAA’s measures will be too little, too late. The proposed commercial UAS guidelines underwent a 60-day period of public comment, which will be taken into account before the final regulations are published, most likely next year. In the meantime, close calls continue. As recently as May 29, a passenger jet had to swerve upward in midair to narrowly miss colliding with a drone at 2,700 feet en route to LaGuardia airport. It is painfully obvious that clear rules, stricter enforcement and ongoing scrutiny are needed to stay ahead of this rapidly advancing new technology.

“While LAAPOA respects the rights of individuals to use and enjoy their drones, California pilots had the highest number of close calls with unmanned aircraft in 2014,” says President Marshall McClain. “We remain extremely concerned about the high security risks that drones present at our airports. Public policymakers should act decisively to protect travelers from the misuse of these aircraft, especially by those who seek to disrupt air travel and inflict severe harm on America.”