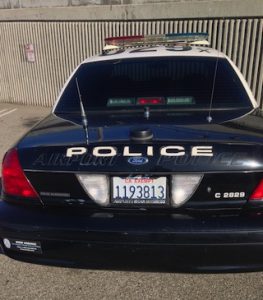 Police cars are one of the main symbols that the public associates with law enforcement, and one of the primary tools that help officers do their jobs effectively. Hard-driving police work causes tremendous wear and tear on vehicles, and regular repairs and replacements are required to maintain safety and efficiency. Yet Los Angeles Airport Police are saddled with a high-mileage, often dilapidated fleet far beyond the norms of accepted best practices. LAWA’s refusal to invest in security equipment and facilities is an ongoing roadblock to LAXPD’s mission of protecting one of the nation’s busiest and fastest-growing airports.

Vehicle replacement policy details vary from agency to agency, depending on environment, condition, budget and other factors, but there is a consistent overall industry standard. A survey of 32 California police and sheriff’s departments shows that the average threshold is about 75,000 miles or 4.6 years for replacing motorcycles, and around 90,000 miles or 3.5 years for patrol cars. The LAXPD fleet, however, includes 7-year-old motorcycles and 10-year-old police cars. There are motorcycles with more than 100,000 miles and vehicles approaching 200,000 miles, double and in some cases nearly triple the industry standards.

While it’s not unusual for an ordinary family car to last 200,000 miles and beyond, high mileage has a different weight on a police vehicle. Law enforcement duties place heavy demands on vehicles, including frequent use, exposure to the elements, prolonged idling, stop-and-start city driving, quick maneuvering, high-speed chases, off-road terrain and rapid emergency responses. Police vehicles wear out sooner, and their prompt replacement is important for optimal performance. Officers need to be able to respond to incidents swiftly and dependably, without the threat of breakdowns. And although fully equipped new police vehicles aren’t cheap, they are more cost-effective over time. Older, high-mileage vehicles require more repairs and thus are more expensive to maintain; most fleet consultants agree that beyond 85,000 miles, the total cost of ownership increases.

In addition, as the most visible police-related asset in the public eye, vehicles play an important role in officer morale and community perception. Like uniforms for personnel, marked law enforcement vehicles project a unified, authoritative command presence. A clean, current and well-maintained fleet conveys an image of professionalism. Cars with dents, scratches, rust, exposed wiring and torn upholstery — to name a few problems evident in the LAXPD fleet — do little to help inspire confidence or respect. Instead, they imply carelessness and lack of commitment, to both the public and the officers who drive them.

For those who may sometimes spend their entire shift in these vehicles, the aura of disrepair can be uncomfortable, frustrating and dispiriting. Neglected vehicles can even endanger officer safety. In one case, an officer at L.A./Ontario Airport received carbon monoxide poisoning and was hospitalized due to an exhaust leak in a police. This was after the officer had red-tagged the vehicle and requested that it be serviced. The vehicle, like many others, was overdue for replacement, with over 197,000 miles on the odometer — yet that very vehicle is still in the fleet today.

“The lack of attention paid to updating old and worn-out vehicles — disregarding industry replacement standards — is just another sign of LAWA’s lack of investment in its dedicated police force, even as it devotes significant resources to flashy airport renovations,” says LAAPOA President Marshall McClain. As part of LAAPOA’s continuing effort to shed light on this disparity, McClain recently traveled to Washington, D.C., and testified before the House Transportation Security Subcommittee about LAXPD staffing shortages and ways to improve security in the wake of the November 1, 2013, shooting. “I am concerned that airport management at LAX is not balancing policing and security with their ambitions to physically expand the airport and market it as a destination for world travelers,” he told the assembled lawmakers.

McClain points out that every vehicle LAPD drives at LAX is paid for by LAWA, and those vehicles are not in the same state of disrepair. But LAXPD is expected to make do with what it has, while LAWA sprinkles some new vehicles into the fleet and places new decals on old vehicles to create the illusion of newness. “LAWA releases statements that hundreds of millions are being spent on public safety, but maybe they should stop including the $49 million illegally diverted to the City general fund and LAPD or perimeter fencing and in-line baggage systems to bloat the numbers,” he says. “The bottom line is that our police force is dwindling and our police fleet is falling apart. We are forced to drive police vehicles that are well past the salvage/replacement dates, or in some cases our officers are forced to ride in a 15-passenger van because we do not have enough serviceable vehicles available for their shift.”

“These matters were brought to OSHA, which simply relied on LAWA’s risk management, which actually stated we would never have vehicles in service like that; that was three years ago,” McClain continues. “LAWA management told lies then, and they’re lying still. It’s time for the Board of Airport Commissioners, Councilman Bonin or Mayor Garcetti to intervene, because clearly our general manager’s eye is fixed on spending enormous amounts of money on beautification. It shouldn’t take another workplace tragedy that could’ve been avoided for change to occur. When it comes to its employees, can LAWA for once be proactive rather than reactive?”