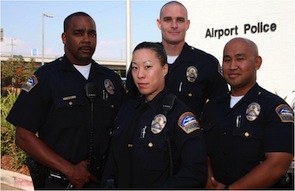 Among the many challenges of meeting LAX’s growing security needs is maintaining a stable and sufficiently staffed police force. Faced with the reality of recruitment and retention issues — including heightened competition for quality officers among all agencies and police departments — it’s time for the Los Angeles World Airports (LAWA) to address a glaring problem: the pay and benefit discrepancies between LAPD and LAXPD for performing the same services at LAX.

Officers working at LAX complete the same training and meet the same POST standards, whether they are LAPD or LAXPD. The departments have the same specialized units, such as bomb and patrol, K-9s, terrorism liaison officers, dignitary protection, detectives, commercial enforcement and motors, to name a few. (In fact, airport police supplement their Academy training with an additional 40 hours of federally mandated  airport-specific training, such as hijacking and terrorist preparedness.) They are exposed to the same dangers of working at one of the world’s top terrorist targets, and they work equally hard in protecting the traveling public and civilian employees. They pay the same taxes and high cost-of-living expenses, and their efforts benefit the same city and the same organization (LAWA).

Yet there are significant differences in compensation between the departments, which is ironic because prior to being assigned to LAX, all LAPD officers must first be trained and certified by LAXPD with airport-specific training. Pay: On average LAPD officers assigned to LAX are paid 25% more than LAXPD. Retirement: An airport police officer has to work 14 years longer to receive the same retirement level and percentage as LAPD. Medical disability:  An LAPD officer’s medical retirement starts at 50% of salary, increases based upon the level of disability, and is tax free, whereas an airport police officer’s benefit tops out at 33 1/3% of salary and is taxed. It’s important to note that all police services at LAX, whether provided by LAPD or LAXPD,  are paid for by LAWA — not the City of Los Angeles. Airport police are funded solely by passenger and other fees associated with the airport, as designated by federal law. No city, county or state tax funds sustain their duties.

With the recent Department of Transportation Office of Inspector General’s report detailing illegal diversion of airport revenues away from LAWA’s operating budget and into the city’s, it’s time to take a hard look at the actual services provided by LAPD at LAX, says LAAPOA President Marshall McClain.

“In addition to resolving the lack of transparency surrounding LAPD’s services, we need to review which of them are necessary and worth paying expensive overtime for, particularly now that LAXPD’s expanded powers have reduced the need for many of LAPD’s services,” says McClain. “The Inspector General’s report questioned nearly $8 million in payments to LAPD without proper documentation of services provided. All of those duties except for bomb squad could have been performed in-house by LAXPD personnel.”

It is crucial that LAWA address its security operating budget and resolve the pay and benefit differentials to ensure the long-term viability of the airport police system. Additionally, in order for LAX to meet the federal requirement of being a self-sustaining facility, revenue diversion needs to stop.

“It’s really not in anyone’s best interests to continue paying LAPD officers overtime for services best provided by LAX’s on-site police agency,” says McClain. “The city will be faced with additional federal fines, already in the millions, if the status quo doesn’t change, and it will again be forced to return money to LAWA that should have been designated for LAXPD in the first place. Besides being unfair to LAWA and the LAXPD, this practice is unfair to the passengers and airlines paying service fees, and it’s unfair to the citizens in need of LAPD’s presence in the airport’s adjacent neighborhoods, where crime has been on the rise.”

McClain says it’s time for tax payers to demand that the city council, mayor and elected state representatives live up to the promise made in 2006 to bolster the city’s police services by raising trash fees.

“I, too, live in the city and gladly pay the increased fees for more police services,” says McClain. “But the city needs to live up to its side of the bargain and return officers to the city streets, which our taxes are paying for.”

Additionally, LAWA management needs to be held responsible for providing appropriate public safety measures and staffing. “We cannot continue to allow LAWA and LAPD management to violate the city charter and place LAPD officers in positions that break federal law and waste limited public safety resources, as was made apparent in the recent federal audit,” concludes McClain.