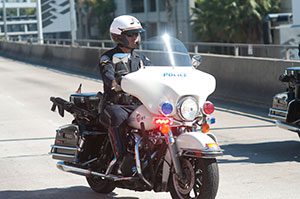 January 1 marked the start of a new era for the Los Angeles Airport Police. As a result of the long-deserved and hard-won passage of AB 128 in October 2013, its officers were reclassified under California Penal Code 830.1, upgrading them to the same status as the LAPD and other municipal police departments in the state. This change not only affords airport police the respect reflective of their training and professionalism, but it also expands their authority, allowing them to provide enhanced service to the traveling public and increasing the efficiency of local law enforcement.

The new powers granted by this measure encompass many of the routine tasks necessary for the safe operation of a major airport. These include the ability to seize firearms or other deadly weapons, possess diversionary devices, seize explosives and incendiary devices, possess explosives for canine training, enforce laws against making false bomb reports, and remove unsafe vehicles from the road. Having the legal authority to carry out such duties allows airport police officers to respond more rapidly and directly in many situations, whereas previously they often had to call in LAPD for assistance with actions they were not

sanctioned or trained to perform.

Along these lines, LAXPD Motor Unit assumed all responsibility for motor patrol and traffic enforcement duties at LAX effective December 29, ending a more than 10-year practice of having LAPD motor officers handle this on an overtime basis. Moving the motor work back to airport police is long overdue, and LAXPD is working to ensure that it has enough motors to make this transition successful.

As the law enforcement agency responsible for protecting one of the world’s busiest airports and one of the nation’s top terrorist targets, the Los Angeles Airport Police need all the tools available to maintain security … and recent events have only underscored this necessity. “For more than 30 years now, our police officers had met or exceeded the standard set by the California Commission on Peace Officer Standards and Training (POST) recommendations but had been the victims of politics,” says LAAPOA President Marshall McClain. “I am pleased that we will now enjoy the legal distinction befitting our training and service.”

By gaining comprehensive law enforcement powers and undertaking additional duties, airport police officers are even better equipped to fulfill their mission of keeping travelers and the residents of Los Angeles safe. With so many changes afoot, 2014 promises to be a significant and successful year for this department.