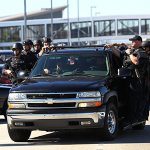 On November 1, 2013, TSA agent Gerardo Hernandez was killed and six other people were injured when a gunman opened fire in Terminal 3 at LAX. We just passed the fourth anniversary of that tragic day, and threats to airports only continue to grow. LAX has undergone big leadership changes since the shooting, with a new […] Read More »

In our new series of articles entitled “The Women of LAXPD,” LAAPOA highlights… Read More »

The Women of LAXPD, Part 1: The Fight Is Far From Over

In our new series of articles entitled “The Women of LAXPD,” LAAPOA will highlight… Read More »