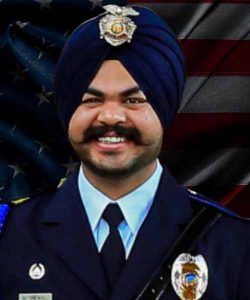 Officer Harminder Grewal passed away on August 26 following injuries he sustained four days earlier when his patrol car was struck head-on by a pickup truck on Highway 99 at about 4:30 am.

The oncoming vehicle crashed through a barrier on the divided highway and collided with Grewal’s patrol car. The driver of the vehicle was killed in the crash. Officer Grewal and his partner, who were en route to help with evacuation efforts ordered in response to the Caldor Fire, were both critically injured in the crash. Officer Grewal was transported to a nearby hospital, where he remained until succumbing to his injuries.

Officer Grewal had served with the Galt Police Department for over two years. He is survived by his parents and brother.