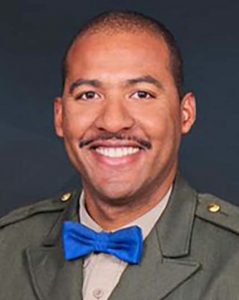 Officer Andre Moye was shot and killed after conducting a traffic stop near the junction of I-215 and Eastridge Avenue in Riverside.

As Officer Moye completed paperwork to impound the vehicle the driver retrieved a rifle from it and opened fire. Despite being mortally wounded, Officer Moye was able to radio for assistance. Officers from the California Highway Patrol, Riverside Police Department, and Riverside County Sheriff’s Office responded to the scene and engaged the subject in a prolonged shootout. Two other officers were wounded and the subject was killed.

The subject who shot him had previously served 10 years in prison for attempted murder.

Officer Moye had served with the California Highway Patrol for 3-1/2 years and was assigned to the Riverside Area Office. He is survived by his wife, mother, father, and siblings.