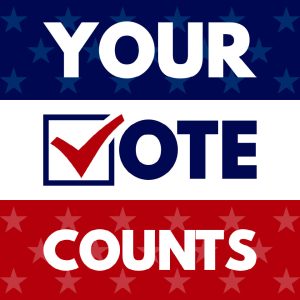 With California’s primary election already underway, LAAPOA reminds all our members and supporters that now is the time to make sure that you are registered to vote, have received your ballot and are informed on the issues and candidates before Election Day on June 7. With many crucial contests being decided at the national, state, county and city levels, this is our opportunity to have a say in the future direction of our communities and the topics that affect law enforcement. Read on for a list of LAAPOA’s endorsements and what you need to know to make your voice heard in support of public safety.

While some might be tempted to skip voting because this is “only” a primary, it’s important to remember that primaries actually wield a lot of power in the political process — and not only by shaping the contest in November. Although in most cases the top two vote-getters will advance to the general election, in L.A. city and county races, a candidate can win the office outright if they receive more than 50% of the vote in the primary. That means if you skip the primary, you could miss your chance to speak out on major offices like mayor, sheriff and more. Remember, the political leaders we elect this year will greatly affect not only the future of our state but also, because of California’s significant economic and cultural influence, the entire country. It’s frequently said that “as California goes, so goes the nation.” Considering our state is the fifth-largest economy in the world, it could even be said that the decisions we make at the ballot box could have global consequences.

First up, if you aren’t sure whether you are registered to vote, visit registertovote.ca.gov to check your status. The voter registration deadline for the 2022 primary election was May 23, but if you aren’t registered and still want to vote, don’t despair. Under California law, any eligible voter who misses a registration deadline can still register as a conditional voter at a voting center on Election Day and cast a ballot. As soon as their registration application is verified, their ballot will be counted and they will be registered to vote in future elections.

Do You Have Your Ballot?

Vote-by-mail ballots were mailed to all registered L.A. County voters in the first week of May. If you haven’t received yours yet, you can track its status at california.ballottrax.net/voter. Once you return the ballot (there are lots of ways to do that — see the next section for details), the same system will also allow you to track its progress, notifying you when it’s been received and your votes have been counted.

Do You Know Where to Vote?

Voters now have more options than ever for casting a ballot. You can return your vote-by-mail ballot by mail (postmarked by Election Day), place it in a ballot drop box or drop it off at any vote center on or before Election Day. And you don’t have to wait until Election Day if you want to vote in person, either! L.A. County voting began at the Norwalk Headquarters on May 9; more vote centers will be added on May 28 and even more will open on June 4 for the final four days of the election. Residents can use any vote center in the county, so feel free to pick the one that’s closest to your home, workplace or wherever you happen to be when you’re ready to vote. To save time at the vote center, you can even fill out a sample ballot on your phone beforehand, marking your selections and bringing them with you for reference when you vote. Visit lavote.gov for a list of all ballot drop boxes and vote centers in L.A. County, along with the Interactive Sample Ballot tool and plenty of answers to frequently asked questions.

Do You Know Who You’re Voting For?

LAAPOA has endorsed the following candidates, who have been vetted for their backgrounds and voting records on issues important to our members:

In addition, our partners at PORAC have issued endorsements in a number of races for State Assembly, State Senate and U.S. Congress, plus several statewide offices including controller, treasurer and attorney general. Check out their recommendations at porac.org/advocacy/2022-voting-guide.

“Now more than ever, it is essential that we all engage in the political process and make sure law enforcement’s viewpoint is heard loud and clear on the issues that affect our profession and the safety of the public,” LAAPOA President Marshall McClain says. “We have seen the damage that can be unleashed when elected officials conduct reckless social experiments, make knee-jerk decisions based on political pressure or heed the loud voices of a few special-interest groups. We need leaders who understand the realities of law enforcement and will work collaboratively with us to address rising crime, hold criminals accountable, honor victims’ rights and protect the communities we serve.”