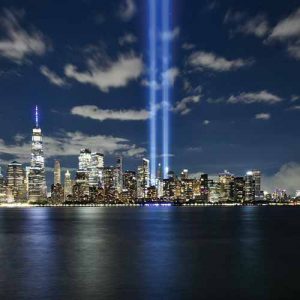 This week marks the 20th anniversary of the single deadliest terrorist attack in world history. The emotional wounds that resulted from the loss of nearly 3,000 lives on American soil are still fresh and painful two decades later — and the scars run especially deep for our country’s first responders and their families.

The 9/11 attacks took the lives of 72 officers from eight local, state and federal agencies and 343 New York firefighters, making it the deadliest incident ever for first responders. Tens of thousands more are still suffering from the aftereffects, with countless officers battling cancer and other illnesses related to the toxins and hazards they were exposed to on the front lines. When the losses from these 9/11-related illnesses are factored in, the law enforcement community has suffered nearly 400 line-of-duty deaths from that single fateful day.

“The sacrifices our first responders made on 9/11 — and continue to make two decades later — will never be forgotten,” LAAPOA President Marshall McClain says. “Our brave men and women knew when they arrived at ground zero that they might not return home to their families, but they still risked their lives to save thousands of people without a moment’s hesitation. Unfortunately, we are still seeing the effects this tremendous act of valor is having on our heroes today.”

According to the 9/11 Memorial & Museum, an estimated 400,000 survivors, first responders, recovery workers, lower Manhattan residents and others were exposed to caustic dust and toxic pollutants on 9/11 or during the nine-month rescue and recovery operations. According to Scientific American, the dust that engulfed the air around ground zero contained cement, steel, gypsum from drywall, building materials, cellulose from paper, synthetic molecules from rugs, glass fibers and human hair from the long decades of the two towers’ use.

A recent article from The Washington Post also highlighted a troubling new trend among 9/11 first responders, many now in their 50s, that suggests many of those at ground zero are suffering from cognitive ailments due to the chemicals and toxins in the air affecting their brains. Of the 818 responders who took the Montreal Cognitive Assessment, a brief test that screens patients for cognitive disorders, 104 had test scores indicating cognitive impairment issues, a condition that occurs when people have trouble remembering, learning new things, concentrating or making decisions that affect their everyday lives. An additional 10 scored low enough to possibly have dementia.

“As we reflect on the events of 9/11, it’s critical that we not forget about the myriad of first responders who survived the attacks but are still suffering tremendously from the sacrifices they made protecting our country in the face of terror,” McClain says. “We must also continue to give thoughts and prayers to the families of first responders who made the ultimate sacrifice. Their actions will never be forgotten.”

In 2019, those advocating for health care and financial compensation for the countless victims affected by the 9/11 attacks received much-deserved help with the signing of the Victim Compensation Fund Permanent Reauthorization Act, which ensured that the federal government would appropriate money to pay all eligible claims until 2090.

As the 20th anniversary of 9/11 quickly approaches, LAAPOA joins the rest of the country in honoring the innocent lives who never returned home that day, those lost to illness in the years since and those who are still battling the effects of this tragedy.

This solemn time is also a reminder of the importance of securing our airports and protecting the millions of travelers who come through LAX every year. We must continue being vigilant and prepared for threats we may encounter in the future from radicals and terrorist groups, and in order to do so, there must be a focus on airport security.

“With everything going on in the world today, there’s never been a more important time to commit to public safety and support airport police and all law enforcement,” McClain says. “We must do everything we can to prevent another tragic attack from occurring on American soil, and it starts with investing in those who have sworn to protect our country from foreign and domestic enemies.”