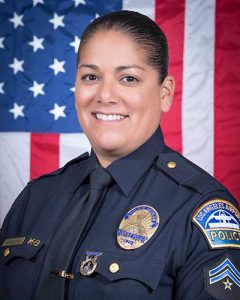 In honor of Women’s History Month in March, LAAPOA featured female leaders who’ve helped move the Los Angeles Airport Police Department forward in a series of articles entitled “The Women of LAXPD.” We’ve decided to pick up where that series left off with a new series called the “LAAPOA Member Spotlight” where we’ll be highlighting more of our members and the remarkable work they are doing to help keep our airports and communities safe.

Officer Michael Ahumada made history when she became both the first female K-9 handler and one of the first two K-9 handlers for the LAXPD. The 22-year law enforcement veteran began her career with the Department just after graduating college, at the age of 24. Since then, she has worked her way up the ranks to become a trainer in the K-9 Unit, where she mentors and prepares the next generation of K-9 officers for success by developing their handling skills. She has also served as a Department representative, speaking at community events and schools to foster positive police–public relations, educate the public about the job and encourage young people, especially young women, to pursue careers in law enforcement. Read on to learn more about Officer Ahumada, her thoughts on being a woman in a male-dominated profession and what inspired her to work with K-9s.

What motivated you to become a law enforcement officer?
As a young adult, I had a group of friends and co-workers who were all motivated to become police officers, and they introduced me to the law enforcement community. So I began taking college courses in criminal justice and started working in loss prevention.

Who have your mentors and role models been?
My mentors and role models have been my parents, who always encouraged me to follow my dreams and interests. They always supported me when I played sports, whether it was softball and basketball growing up or when I started running half-marathons and triathlons as an adult. My other mentors would be the strong family of women in which I grew up: My aunt, who worked her way up the ladder in the Harbor Department of the City of Los Angeles to become a chief wharfinger, and my other aunt and cousin, who became longshoremen in a male-dominated field. They always pushed the boundaries through education and hard work.

What has your experience been like in law enforcement? What challenges have you faced, and how have you overcome them?
Some of the challenges I have faced as a K-9 handler and trainer revolve around wanting my teams to be successful. I take on a lot of the stress in making sure they accomplish their goals. But through it all, it’s worth it in the end when they succeed.

What have been some of your most rewarding moments?
My most rewarding moments are when I make an impact on the community, my family or my friends by reaching out through public speaking engagements at schools, community group events and mentorship programs. When I go out to these events and educate the community, if I can reach that one person, especially a young woman, who sees me in this role and it brings them hope that “if she can do it, so can I” — that’s making a difference.

You’re one of the LAXPD’s first K-9 handlers and the first female handler. How does it feel being the first woman to be a K-9 handler? What inspired you to pursue working with K-9s?
I feel blessed to be not only the first female K-9 handler, but also one of the first two K-9 handlers for the Department. The job wasn’t easy; it was hard work and demanding both physically and mentally. I had to learn to work in sync with the K-9 with verbal control as well as physical control. I failed a lot, but I kept getting back up and continued working hard. I was inspired to work with K-9s after 9/11. That’s when the world changed. The focus was now to keep the public safe from terrorist threats and bombings. That’s when the Department created the K-9 Unit, and I wanted to be a part of that.

What other accomplishments are you proudest of in your career?
My proudest accomplishment would be when I became a trainer in the K-9 Unit. It was my way of mentoring the next generation of officers and handlers in the unit and helping them develop their handling skills so they, in turn, can mentor the next group of handlers.

What factors have contributed to your success?
My failures have contributed to my success more than my accomplishments. Over my K-9 career, I have been challenged a lot, made mistakes and failed. From those challenges, I learned from my trainers, peers and fellow officers to be better and to never give up. I attribute my success to learning from others, whether they were the most experienced person or the new officer in the unit. Everyone has their own perspectives and experiences. When we learn to listen and are open to new ideas, we grow as individuals.

How can male officers and agency management show their support for female officers?
I believe keeping an open-door policy for all officers to voice their concerns, new ideas and suggestions is crucial for the success and support of the officers and the Department.

What is your advice to women considering joining law enforcement or just starting out in their careers?
My advice to women entering law enforcement is don’t be afraid to challenge yourself, put yourself out there and work hard every day to become better. You will be faced with challenges every day — rise to the occasion, and when you fall, get back up and continue the fight.