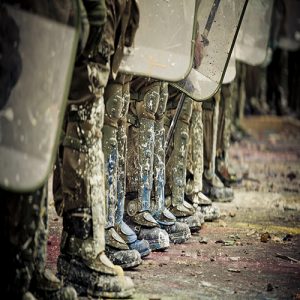 While no one knows what will happen when one of the most highly contested elections in this country’s history comes to a head on November 3, one thing is certain — law enforcement will be caught in the middle of a firestorm, no matter which side comes out on top.

With many cities and police departments still picking up the pieces from months of protests and riots after the death of George Floyd, tensions have reached a boiling point as the days inch closer to the 2020 presidential election. Throughout the country, political rallies have turned hostile, residents continue to receive threatening letters and emails on who to vote for, and more misinformation than ever has been spread on social media and the news. As a result, law enforcement agencies are left hoping for the best and preparing for the worst when the final ballot is counted.

“In a year that’s been challenging beyond words for so many of our brothers and sisters in blue, we are faced with yet another incredible challenge — maintaining order and protecting our communities before and after Election Day,” LAAPOA President Marshall McClain says. “As has been clearly demonstrated throughout the year, we cannot just rely on our cities or state leaders to provide the support and resources we’ll need if things go south once an election winner is named. As worn down as so many officers are, it’s more important than ever that we stay united and remain there for one another in the face of what’s to come.”

Throughout the country, departments are working around the clock to prepare for any potential turmoil that might ensue, not just on November 3, but in the weeks and months ahead. In the Big Apple, the NYPD is anticipating “protests to grow in size, frequency and intensity leading up to the election and likely in 2021,” NYPD Commissioner Dermot Shea said in an internal memo obtained by CNN. The department has prepped for election unrest by holding discussions in recent months with law enforcement officials tasked with keeping order in the event of disputed results.

“The whole idea behind the training is to separate those people who are there to cause chaos, as opposed to the real reason that the protests began in the first place,” Deputy Chief Samuel Wright, the initiative’s leader, told CNN.

In Portland, the epicenter of nightly demonstrations and clashes between protesters, counter-protesters and law enforcement, officials have taken steps to handicap an already depleted and exhausted police force by asking officers to forfeit time off in order to hold the front line during potential unrest after the election.

“We are planning to cancel vacations and other leave times for our officers to ensure that we have a full complement of people ready should they be needed,” Jim Middaugh, spokesman for Portland Mayor Ted Wheeler, told insider.com. As the election nears, city officials have also discussed implementing curfews and deputizing local officers.

“If months of nightly violence and unrest can happen in Portland, it can certainly happen here in Los Angeles if we aren’t prepared or receive the necessary resources needed to alleviate such restlessness,” McClain says. “We were all caught flat-footed by the level of unrest that ensued over the summer. My hope is that departments have a plan of action set in place and a way to mitigate situations from quickly escalating this time around.”

Other departments, such as Metropolitan P.D. in Washington, D.C., have stocked up on riot supplies. The department purchased over $100,000 worth of tear gas canisters and tear gas grenades in preparation for potential post-election riots. When asked by councilmembers during a press conference about the purchase, Police Chief Peter Newsham said, “In law enforcement circles, it is widely believed there will be civil unrest after the November election regardless of who wins. Now is not the time to restrict the police department’s ability to effectively deal with illegal rioting.”

Extra precautions are also being made by businesses to ensure the level of destruction that occurred during the George Floyd riots does not happen again in November. From mom-and-pop stores to Fortune 500 companies, business owners around the country are working with security consultants and local police to identify ways to minimize disruption to their operations and protect employees.

“The stakes are so high, that this political chaos could transcend into something worse, into physical action, in the event that we come up to a contested election,” Jonathan Wackrow, managing director at Teneo, a management consulting firm that does corporate risk assessment, told CNN. “We want to prepare [businesses] for the entire spectrum of threats and the consequences those threats may have on their organization, on their people, processes and technology so they can sustain operations in the midst of chaos.”

No matter what happens on election night, it’s important for officers to maintain a level head and see themselves as members of the community they have sworn to protect. “As peace officers, this is not about being Democratic or Republican — this is about protecting ourselves and our communities from danger and handling potentially hostile situations with professionalism, dignity and respect,” says McClain. “We can’t look at the current situation as us-versus-them. Instead, we need to do what it takes to continue improving our relationship with the community while remaining loyal to our oath.”