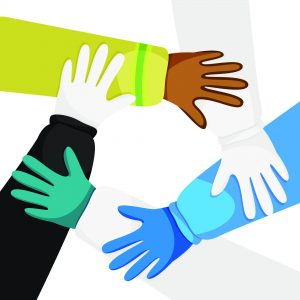 Amid the protests, unrest and calls for reform following the death of George Floyd in Minneapolis, critics of law enforcement have attempted to place the lion’s share of blame on police unions for their role in representing and protecting cops. These arguments claim that law enforcement associations are somehow different than other unions, yet the attacks simultaneously echo the same rhetoric that has been hurled against all of organized labor for years — clearly just another tactic in the long campaign to weaken the labor movement and divide and conquer workers. As Labor Day approaches, let’s be mindful of the real role of police unions and the solidarity we share with our fellow public employee groups.

In just one example of the recent rush to scapegoat law enforcement unions, in mid-August the U.S. Conference of Mayors released its plan on police reform, which identified collective bargaining agreements as a major obstacle to regaining public trust. According to the report, they “often contain provisions that go far beyond necessary protections and impede a department’s ability to investigate misconduct allegations and, in a timely fashion, hold officers accountable.” The group suggested that police bargaining rights should be restricted and even that contracts should force officers to cooperate with investigations, a clear threat to due-process rights.

“Anti-law-enforcement groups would have us believe that police unions are a nefarious, all-powerful force preventing departments from punishing or ousting officers when it’s warranted,” LAAPOA President Marshall McClain says. “In what other industry do you blame the workers at the bottom of the corporate ladder instead of the CEO? Collective bargaining is necessary precisely because without it, management would hold an overwhelming proportion of power over workers. Police unions don’t make the laws, we don’t hire or fire anyone, and we don’t decide who to prosecute — legislators, civic leaders and department management are the ones with that power, when they have the political will to actually take action. We aren’t about defending bad cops; we’re here to make sure that employees receive the due process they are entitled to and management follows the rules when it comes to discipline, especially since law enforcement and firefighter unions don’t have the right to elect to strike if we are dissatisfied with our contracts or working conditions.”

Just like other labor unions, police unions bargain with employers on behalf of their members to secure fair compensation and benefits; protect employees from retaliation, unjust discipline and other abuses of power; and advocate for safe working conditions and other common interests. If there is a difference, it’s only in the fact that law enforcement is one of the most complex, challenging and dangerous professions out there, necessitating even more protections from on-the-job perils. Recognizing that officers are on the front lines when it comes to coronavirus risk, for instance, the federal government recently passed S. 3607, the Safeguarding America’s First Responders Act, which establishes a statutory presumption that first responders who die or become disabled from COVID-19 or related complications did so because they sustained a personal injury in the line of duty, making their families eligible for benefits. Law enforcement unions were instrumental in advocating for that measure, as well as similar policies at the state level to make sure first responders’ COVID-19 infections, cancer and other hazardous exposures, and even post-traumatic stress are covered under workers’ compensation as being caused by their jobs. Furthermore, far from obstructing efforts toward police reform, law enforcement unions (including LAAPOA’s partners at PORAC) have often spearheaded it, such as working tirelessly to pass California’s landmark SB 230, a comprehensive new policy that goes further than any bill in the country to reduce the use of force.

“It’s important to explain and demystify what police unions really stand for and how we serve our members and the public good,” McClain says. “Here at LAAPOA, for example, we worked for years to get our LAXPD members reclassified under California Penal Code 830.1, upgrading them to the same status as the LAPD and other municipal police departments in the state, reflective of their training and professionalism. We’ve worked to close the pay and pension gap between our officers and other public safety professionals, and now we’re standing up for employees against a pattern of practice of racial, gender and ADA discrimination. In addition, we’ve consistently advocated for aviation security measures to protect the traveling public. We now also represent the Los Angeles Park Rangers and the Los Angeles Municipal Police (formerly General Services Police); our goal is to improve equipment and raise pay parity and employee benefits for our members to the standards of all other peace officers in the city of Los Angeles. Our union isn’t just about protecting our own self-interest; it’s about ensuring fairness, justice and safety.”

Critics of law enforcement are trying their hardest to isolate police unions from the labor movement, arguing that they are both distinct from and worse than all other unions, but it’s clear there’s a significant overlap with the effort to discredit and dismantle organized labor as a whole. The claim that police unions make it harder to get rid of bad officers sounds almost identical to the accusations made against teachers’ unions in the past few decades, as well as the ongoing efforts to eliminate collective bargaining and benefits for public employees in the name of supposed “fiscal responsibility.” While the anti-police crowd tries to drive a wedge between law enforcement and other labor — lobbying the AFL-CIO, for example, to cut ties with its public safety members — anti-union forces are jumping on the opportunity to paint police unions in a bad light. But make no mistake, they won’t stop there. Attempts to eliminate police unions will almost certainly be followed by movements against other public-sector unions, such as postal workers, teachers and firefighters.

“Quite simply, these attacks are misdirection,” McClain explains. “There’s no single, simple shortcut to reform, and cutting police unions out of the process instead of engaging them in the effort to create change is doomed to fail. Moreover, it diverts attention from the root causes of systemic racism, economic inequality and social issues that lie at the heart of this debate. Meanwhile, it’s playing into the hands of those who would rather see organized labor destroyed so employers can run roughshod over their employees. This is what Labor Day is all about: Everyone who works for a living deserves to have a voice to advocate for their rights, whether they’re a cop, a teacher or a tradesperson.”