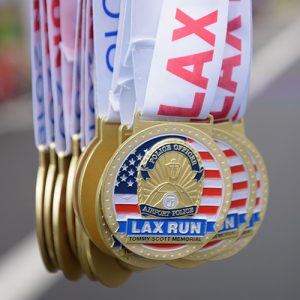 On Sunday, April 29, more than 1,000 runners participated in the 2018 Tommy Scott Memorial 5K, 10K and Half-Marathon at LAX. Hosted by the Los Angeles Airport Police Athletics and Activities League in partnership with LAAPOA, Los Angeles World Airports and the Association of Airport Employees, and supported by a host of generous sponsors and volunteers, the event brought together athletes, law enforcement and local families for another successful run to remember.

Named after Officer Tommy Scott, the first Los Angeles Airport Police officer killed in the line of duty, the yearly run has grown from a small, informal tribute by fellow officers into a USATF-certified and sanctioned community-wide event that benefits the Tommy Scott Memorial Scholarship Fund, helping young people achieve their educational goals. This year the event further expanded into a full weekend of activities, beginning on Saturday, April 28, with the second annual Tommy Scott Memorial Car Show. Attendees at the free gathering, held at the site of the planned new airport police facility on Loyola Boulevard at Westchester Parkway, admired an array of classic cars, enjoyed a barbecue and a live DJ, and perused the offerings from health and wellness vendors.

The next day’s festivities began at 7:30 a.m. at Westchester/LAX Fire Station No. 5 on Emerson Avenue with a moving opening ceremony by the Los Angeles Airport Police Honor Guard and a stirring performance of the national anthem by TSA Supervisory Officer Sheleta Fraser. Speakers including LAAPOA Board member Fran Sur and LAXPD Chief David Maggard welcomed the assembled crowd and described Tommy Scott’s lasting legacy, and a representative from Los Angeles Mayor Eric Garcetti’s office presented a proclamation marking the significance of the event. 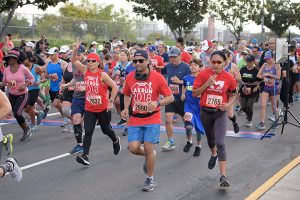 At 8 a.m., runners began to take their marks, with start times staggered for the three different distances. The course followed the northern and western perimeters of the airport, along streets lined with trees and colorful spring flowers. As always, the event drew runners of all ages and abilities, often colorfully costumed, some pushing babies in strollers or accompanied by their dogs. Many participants were first responders and law enforcement supporters, including a large group of dedicated youngsters from the Santa Ana Police Athletic and Activity League, who took on the 10K after having completed a 5K in Fullerton the day before. Among the officers hitting the streets in full uniform and heavy gear were LAXPD’s Starla Reader, Ray Woods and Ricardo Aguilar, who ran the 10K together in honor of Aguilar’s retirement. State Assembly Speaker Anthony Rendon was a notable entrant in the half-marathon, finishing in the top half of competitors. Meanwhile, police cadets from the Los Angeles Airport Police, Los Angeles Police Department and Los Angeles School Police Department were out in force as volunteers, helping distribute water to racers. 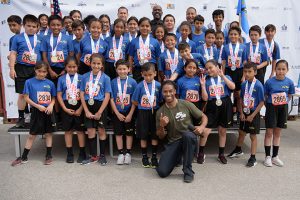 The top half-marathon finisher was 41-year-old Shinsuke Adachi of Redondo Beach, with a time of 1:20:32. The first-place female finisher was 32-year-old Miruna Ouatu-Lascar of Long Beach, who came in at 1:30:16. Allen Gillett, 39, from Culver City was the 10K’s fastest finisher with a time of 38:35, and the top female runner was 49-year-old Maria M. Briseno of Los Angeles, clocking in at 47:48. The top male and female 5K sprinters were 17-year-old Ciro Benitez and 32-year-old Norma Gonzalez, both from Los Angeles, with times of 17:57 and 21:28, respectively. Full race results (including individual finish-line photos) and event photos are available online.

After the race, each finisher received a medal. State Senator Ben Allen, whose district includes LAX, helped to present the awards. 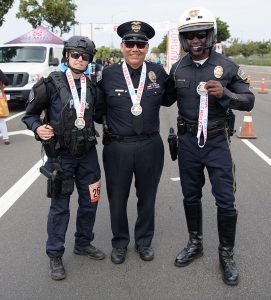 “Yet again, we are overcome by gratitude for all the sponsors, organizers, volunteers, runners and spectators who stepped up to support this event and made it a resounding success,” says LAAPOA President Marshall McClain. “It means the world to us to see so many of our community members gathered together in the name of our fallen brother Tommy Scott, championing the values of education, fitness and public safety that he stood for. The LAX Run has grown by leaps and bounds, and we look forward to continuing to build this tradition, further engage with our community and make this great event even greater every year.”

Special thanks to Maddy Flanagan for photographing the event.