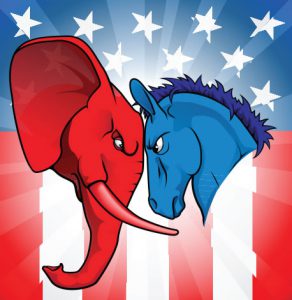 As the general election approaches, and the chaotic presidential race continues to dominate headlines, LAAPOA urges all members to stay informed and pay close attention to the presidential and legislative candidates’ approaches to law enforcement policies. Of course, all political hopefuls will claim that they support police — but how that support might play out in the form of law-enforcement-related policy is quite different. In the cases of Donald Trump and Hillary Clinton, while neither candidate strictly adheres to the party line in their individual campaigns, digging a little deeper into the Republican and Democratic platforms gives a clearer idea of what laws either candidate might be presented with as president, depending on which parties prevail at the executive and legislative levels in November.

Unlike elections past, criminal justice reform is now part of both parties’ platforms, as both Republicans and Democrats agree that the prison population is disproportionate and unsustainable. With comprehensive reform at the federal level waiting in the wings of Congress, both parties have addressed reform to help reduce incarceration of those serving mandatory sentences for drug crimes.

The following are key positions as published in the Republican party’s platform:

It’s worth noting that Trump departed greatly from the tone of the party’s platform during the convention, building up the premise that violent crime is on the rise and “a national epidemic.”

The Democratic platform outlines the following as its vision for the path forward:

In the wake of violence against police, both parties have expressed support and respect for law enforcement, but neither party has put forward specific proposals for funding police initiatives. However, the Democrats have included the following suggestions to reform police departments in the wake of highly publicized use-of-force cases:

In terms of individual views regarding law enforcement issues, on the campaign trail and in interviews, Trump has come out strongly in favor of capital punishment. Clinton says she supports the death penalty in extreme cases, such as terrorism, citing the Oklahoma City bombing and subsequent execution of Timothy McVeigh.

Trump says that as president he would reverse limits imposed by President Obama on transfers of military-grade equipment to police — a ban that Obama himself is reconsidering after meetings with law enforcement leaders that took place immediately after the murders of police officers in Dallas and Baton Rouge. Shortly after the Orlando shooting, Clinton pledged to provide law enforcement with the necessary equipment to perform their jobs, but she has not directly addressed reversing the ban.

Trump has the backing of the NRA and supports a national right to carry firearms. (He has reversed himself on previous positions on waiting periods for guns and banning assault weapons.) Clinton backs a ban on assault rifles, advocates comprehensive background checks on those seeking to purchase guns, and, post-Orlando, called for measures preventing individuals on the no-fly list from buying weapons.

Last year, Trump expressed support for federal funding for body cameras if agencies want to buy them but cannot afford to. Clinton has called for mandatory body cameras, in line with the Democratic party platform, without specifying how they would be paid for.

These are just a few of the issues and positions that will be in focus as the spotlight on law enforcement and criminal justice continues throughout the debates and the rest of the presidential race. This underscores why input by police into any reform processes is essential. Looking at the re-evaluation of the use of military equipment by police as an example, it’s clear that policies can, in certain situations, change quickly. That’s why we must all be involved at all levels of government and speak up for logical, common-sense measures that improve how we do our jobs.

More news on police–community relations and changes proposed in the wake of the tragic police ambushes are sure to play out very publicly, so LAAPOA encourages its members to pay special attention to the developing stories that affect our profession —  and get ready to vote in November!