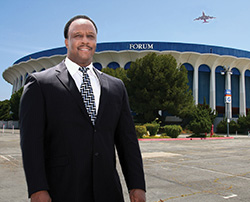 Current City of Inglewood Mayor James Butts is the former deputy executive director in charge of Homeland Security and Public Safety at LAX. He has a long history of police service, mostly with the Inglewood Police Department, which he joined in 1972. There he held the positions of officer, detective, SWAT commander and Narcotics Division commander before promoting to sergeant in 1981, lieutenant in 1984, chief of operations in 1986 and finally deputy chief in 1990. In 1991, at the age of 37, Butts accepted the top job at Santa Monica P.D., acting as chief until 2006, when he became the head of security and law enforcement for LAWA. Here, he shares his insights and recommendations, based on his long career of public safety and unique perspective into the operations at LAX.

What were the developments that you spearheaded while at LAX?

When I was selected in June 2006 to head up Homeland Security and Public Safety, KCAL had done an exposé on the security shortcomings of LAX, particularly as they related to the “Fuel Farm.” I found the LAXPD to be understaffed. We engaged in the largest police officer recruitment in the history of the Department, increased pay and created a two-stripe pay-grade enhancement.

Comprehensive plans were developed to provide barricades for entrances to the airfield, and plans for mobile, trunked radio systems were developed and later enacted. Three assistant chief positions occupied by Erroll Southers (chief of intelligence), William Thompson (chief of administration) and Frank Fabrega (chief of nonsworn security officers) were added, bringing structure and synergy to the organization of the LAXPD.

These systems were either implemented or recommended for implementation in a September 2007 presentation to the mayor and executive director. We invested in new police vehicles, four of which were outfitted with ALPR technology. We staffed checkpoints with podium officers. I arranged for LAXPD officers to attend the LAPD Academy to foster greater camaraderie and consistency in tactical training.

What additional technology improvements do you recommend?

I feel that important and necessary additions are a perimeter intrusion-detection system with IP-addressable, smart PTZ cameras monitoring shake-sensitive fences, as well as a low-powered radar (millimeter wave) system to track the movements of people who penetrate or climb perimeter airfield fences. I also recommended, and still do, the implementation of intelligent video analytics, incorporating facial recognition technology.

What were the results of your efforts at LAWA?

In December of 2009, LAX was named the No. 1 most secure Category X airport in the country by the TSA.

What do you think is the current strength of the Department, and how will it evolve?

LAWA will continue to hire top-tier officers. While I was there, we were able to raise the base and specialty pay for the LAXPD. I have great respect for new Executive Director Deborah Flint and feel she that will take LAWA to new heights as a world-class airport system. I was a police chief contemporary with the new chief of police designee for the LAXPD, Dave Maggard. He is one of the brightest, most capable law enforcement minds I have had the opportunity to work and interact with. I congratulate him.