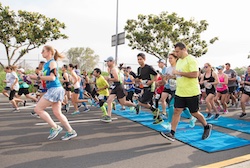 The June 25, 2016, Tommy Scott Memorial Run is in the books as the biggest and best yet! Thanks to the addition of a half-marathon to the course this year (with all courses USATF-certified and sanctioned), plus a robust media and marketing campaign, the total numbers of runners tripled from 2015, to 755. Support from generous sponsors, participating vendors and a host of volunteers helped make it a run to remember.

Named after Officer Tommy Scott, who was killed in the line of duty in 2005 while protecting the aviation community, the annual run is hosted by LAAPAAL, the nonprofit charitable organization of LAAPOA, Los Angeles World Airports and the Association of Airport Employees (AAE). The run has grown from a small, informal tribute by fellow officers into a full-fledged, community-wide event that benefits the Tommy Scott Memorial Scholarship Fund.

Originally planned for May 21, this year’s race had to be rescheduled when the delivery of the 66,000-pound space shuttle fuel tank known as ET-94 to the California Science Center would have directly intersected the race route.

The half-marathon, 10K and 5K starts were staggered, with runners beginning the race in cool June Gloom temperatures that yielded, in typical Southern California fashion, to sun and higher temperatures as the race was underway. However, the warm conditions did not thwart the top runners from maintaining a fast pace. The No. 1 half-marathon finisher was 39-year-old Horacio Pena of Los Angeles, who at 1:19:28 clocked just over a 6-minute-mile average, while the first-place female finisher was 31-year-old Laura Gonzalez of Lake Forest, who came in at 1:34:45. More race results are available here.

After the race, each finisher received a medal, with LAXPD Officer Devin Feldman helping to emcee the event and present the awards.

“We are so grateful to everyone who supported, attended and volunteered at the event, helping to honor Tommy’s legacy and love for kids through the scholarship fund,” says LAAPOA President Marshall McClain. “Not only that, this run is very much in the spirit of Tommy’s commitment to physical fitness and public service, so having a highly diverse turnout of runners, as well as a strong showing by the Westchester community, means a lot to all of our airport’s police officers.”

McClain is already looking ahead to 2017 and beyond: “We hope to double the number of participants, and are exploring ways to further engage the community and make the event better not just next year, but every year after.”