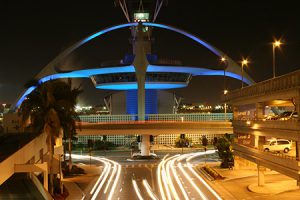 This month, Los Angeles World Airports issued a call to design and construction firms for bids on building an automated people mover at LAX. This significant step forward in the massive $5.5 billion Landside Access Modernization Program (LAMP), which aims to dramatically overhaul the airport’s transportation landscape, only underscores the fact that security concerns remain an afterthought when it comes to spending. More than five years into LAX’s multi-decade $14 billion modernization — the largest public works program in L.A. history — the airport police department continues to operate in an outdated, run-down facility that is inadequate to meet the growing public safety needs of an expanding aviation center.

The current LAXPD station is about 60 years old, unable to accommodate the modern technology necessary for officers to do their jobs. A few cosmetic paint jobs over the years cannot disguise the building’s disrepair, including recurrent air-conditioning failures, water damage and mold growth on many walls, and underlying structural problems — especially worrisome considering that Southern California is overdue for a major earthquake. This dilapidated environment certainly does not project a professional image commensurate with the agency that protects one of the world’s foremost airports. Even more importantly, it creates difficult and potentially hazardous conditions for the personnel who work there every day.

In contrast, LAWA has spent millions in grants and airport revenue on facilities for contracted services, including LAFD Station #5 and the state-of-the-art LAFD Station #80. Complete with a gourmet kitchen, indoor racquetball/basketball court, gym and theatre room, Station #80 —known as “Crash #80” for its Aircraft Rescue and Firefighting Facility (ARFF) — cost $13,546,500, paid for by a combination of airport revenue bond proceeds and an economic recovery grant from the FAA, which is funded by the American Recovery and Reinvestment Act (ARRA) totaling $10,832,00. As with all facilities at LAX, no funding came from the Los Angeles City general fund, and neither would the building of a new, much-needed airport police station.

It is hard not to see the lack of investment in the airport’s proprietary police force when its headquarters cannot even properly house its personnel and equipment. Although LAAPOA has repeatedly pointed out the need for improvements, airport management claims that funding restrictions prevent the construction of a new facility. This excuse is becoming harder to swallow as seemingly every other aspect of LAX receives an expensive facelift — from $20 million spent on lighting and media monitors to $1.9 billion on 18 new gates for the international terminal. Money is clearly available, but management has chosen not to prioritize its policing resources, even though bringing them up to par would involve a minimal outlay representing a fraction of the billions spent on other modernization projects. Adding to the concern, as bidding gets underway for the first phase of the LAMP project, is a recent audit by the City Controller’s Office finding that LAWA awarded hundreds of millions of dollars of construction work to companies based on only one or two bids, instead of the three called for by City policy. “We have no way of knowing whether we are getting the best value for our money,” the controller concluded. The funds needed to modestly update LAXPD facilities pale in comparison to the millions potentially wasted by these noncompetitive bidding practices.

At the beginning of this month, airport commissioners approved $10 million in expenditures on preliminary fees and services to prepare for the LAMP project, which includes not only the people mover but also a consolidated car rental facility, two intermodal transportation facilities and road improvements. These efforts to reduce congestion and make LAX more accessible to employees and travelers are important in maintaining its status as a top international airport. But the continuing expansion means new and evolving sectors for police to patrol, as well as ever-increasing numbers of people passing through them. LAX served nearly 75 million passengers in 2015 and is on track to break that record in 2016; the completed improvements will attract even more travelers. The demands on airport police will only grow, yet the essential resources they need to do their jobs are not keeping pace, and the security infrastructure is languishing.

“LAAPOA is excited about the possibilities for LAX’s future represented by this modernization initiative,” says President Marshall McClain. “However, we must make sure the security of our airport is not left behind in these sweeping changes. The projected vision of a world-class 21st-century airport stands in stark to an LAXPD headquarters that is literally falling apart. What message does it send when the highly trained, dedicated officers entrusted to protect these sleek and shiny new facilities must make do with a subpar station, broken-down patrol cars and dangerously obsolete gear? As airports continue to be high-profile terrorist targets and the ongoing threat of mass shootings dominates headlines, the public looks to us to do everything we can for their safety — and at the bare minimum, provide the basic, functional items that are critical to our ability to do our jobs.”

Over the past decade, the City of Los Angeles has made great strides in supporting its fire and police departments by passing bond measures to improve their facilities. Proposition F provided $378.5 million to replace 19 existing fire stations and create two new ones. During the same time frame, the seven-year Proposition Q Public Safety Bond program provided $600 million for the construction of 11 LAPD police facilities and the renovation of 12 more. Even the Los Angeles Port Police built both a new police facility and a state-of-the-art maritime regional law enforcement training center. While the City clearly recognizes that these infrastructure investments are critically important, LAWA has failed to demonstrate a similar commitment to its own force’s needs.

“There’s been talk over the last decade about building a new airport police station, but to date it’s only been talk,” says McClain. “Billions have been spent, and still billions more will be spent — even a VIP terminal for the rich and famous will be completed before an actual LAXPD station is more than a pipe dream. With all of the recent terrorist incidents that have happened at home and abroad, what will it take to prioritize public safety at the second-busiest airport in the country?”