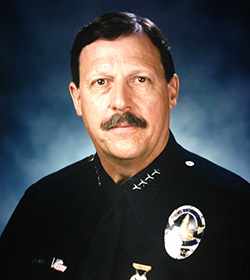 Bayan Lewis has an extensive history of public service, including an Army and National Guard career from which he retired at the rank of lieutenant colonel; 34 years with the LAPD, where he retired as interim chief of police; and another five and a half years with the L.A. County Office of Public Safety, where as chief he was responsible for merging three independent County police agencies into one cohesive department. Since leaving LAWA, he continues to teach on a consultant and contractual basis, and is part of the instructional team in emergency preparedness for the California Specialized Training Institute (CSTI). He also instructs the Leadership, Risk Management, Police Ethical and Moral Issues course for various police and sheriff’s agencies, including Nevada POST.

In our continuing series of interviews with previous leaders at LAX and the Los Angeles Airport Police, Lewis shares his unique perspective of working at the airport, including during the 2005 takeover attempt by his former agency, and provides insight on past and present issues.

Can you describe your experience working at LAX as director of Airport Safety Services?

In 2005 I was contacted by LAWA management to provide a management review of the LAX police agency. I had recently finished building my home in Northern Nevada (which is never actually finished, right?) and was ready for the new challenge. The initial plan was to conduct a review of the Department and make any recommendations over a three- to four-month period. The preliminary focus areas consisted of LAWA Police policies and procedures, and any management issues. After about four months I was appointed interim director of Airport Safety Services and was asked to take on a much greater role in dealing with many airport issues, including the police budget, fire department issues and emergency preparedness.

My 18-month assignment as director of Airport Safety Services at LAWA was perhaps the most interesting and intense of my career, as it gave me a newfound appreciation for the risks and responsibilities the Airport Police endure, and led me to support and believe that they indeed should have full police powers, as they now enjoy under California Penal Code Section. 830.1.

What were the issues and challenges facing the LAXPD during your tenure? How have things changed since then?

One of the first issues I had to deal with was the attempt by LAPD, via the introduction of a City Charter amendment, to absorb the LAX Police into the LAPD. LAAPOA put up a great deal of money and energy, and with those efforts, the measure was defeated. This allowed us to concentrate our efforts on revitalizing and improving the overall conditions of what was already a fairly good agency. The other challenge facing the Airport Police that I immediately recognized was a less-than-perfect management and leadership situation, which did not encourage a progressive push for bettering the training, equipping and supervising of the Department. Admittedly, airport management did not have the Airport Police as a top priority at the time.

My assistant Martin Sato and I took on LAPD billing and K-9 issues and continued to resist the encroachment of LAPD into airport operations. The LAPD chief at the time, Bill Bratton, made considerable efforts to absorb LAX into LAPD. It was my opinion that there was no justification for an increased LAPD uniformed presence at LAX, especially as the Airport Police were achieving higher standards and getting better at the policing job. The LAPD substation at LAX was a toehold that LAPD refused to surrender. It was my thought at the time that giving it up would have shown that LAPD was not a critical presence at the airport. While I believed that it was important for the Airport Police to work in conjunction with some of the specialized LAPD elements (such as bomb squad, intelligence, narcotics and SWAT) to provide the experience and expertise that LAX Police may not have had the opportunity to develop or maintain, LAX had been a cash cow for LAPD for many years. In fact, audits revealed that LAPD had not always been completely accurate in their billing. If LAX had realized the savings from the LAPD uniform and overtime assignments, LAX Police could have substantially improved critical equipment, communications and training. They also might have been able to add personnel to critical elements, further bettering the LAX Police Department.

Larry Fetters, the LAX TSA director at the time, had for some time wanted to form a coordinating committee representing all the agencies with security responsibilities at LAX. With his help and encouragement, I formed the Airport Security Advisory Committee (ASAC) to develop a shared intelligence and counterterrorism process. Key to this effort was the collaboration and information sharing between LAWA and TSA, plus FBI, LAFD, ICE, LAPD, Customs and Border Protection, and others. Since the existing LAX Police emergency planning team was barely functional because of a lack of attention, we formed the LAWA Airport Emergency Preparedness Section, consisting of two LAX Police officers, LAFD, LAPD and LAWA operations people. Their job was to develop a comprehensive, all-hazards airport master plan and work closely with the ASAC.

With the changes in leadership now culminating with Chief Gannon, the leadership has done a complete turnaround for the better. Good leadership is a critical element in building trust and confidence at all levels in an organization. The terrorist events starting with 9/11 opened the eyes of City politicians and Airport Commissioners, and enabled the Airport Police to obtain better quality equipment and training and to remain steadily on the course of overall improvement. Of concern now, though, is that as the world events change and with relatively few domestic terrorist events at the moment, the attention of those with the purse strings starts to be directed toward physical airport improvements, which often come at the cost of increased security.

Is there anything else you’d like to tell LAXPD officers, airport management or policymakers?

The vision for LAWA Police must be to always strive to be the best specialized airport police agency in the country — a standalone force recognized for its forward thinking, planning, exercises and ongoing training regime. It must also be flawless in its ability to work well with all of the overlaid local, state and federal agencies and even with the competing ones. I would stress ongoing training and exercises, even at the cost of some field presence. An officer reacts as he or she has been trained, and without visionary training and support for that process, individual reactions during a disaster will be mixed. Training can be expensive, but in the policing environment, especially one as critical as the Airport Police, the shaving of money and time from training could lead to disaster. Another critical element for the LAWA Police will be to always hire and promote only the best. If you can’t hire or promote the best, I believe you are better off leaving the positions vacant. I always say, “When you hire and promote the best, they will rarely disappoint you — and the opposite is also true.” The Airport Commission must realize that to get the best candidates, they have to pay salaries that attract the best.

I believe the LAWA Police are among the best out there, but should never relax their standards or be OK with the status quo. Working at being better every day must be the goal of every employee of the Department, both sworn and civilian.